County Sligo: The Old and the New 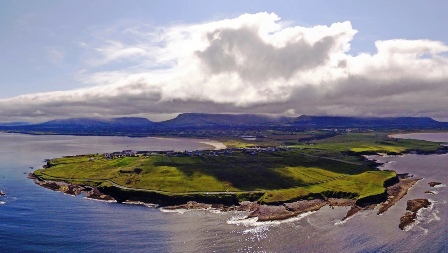 Driving from Dublin to Sligo last year, my wife Linda and I kept noticing signs with slogans we didn’t quite understand. “Children deserve both a mother and a father. Vote No.” “Surrogacy – she needs her mother for life, not just 9 months.” Whatever the question about to be voted on, it was clear it was about parenthood, children and yet another issue that was deeply dividing the Irish.

It wasn’t until a while later that we realized the crux of the matter was not really babies but same sex marriage. Later that May, a referendum was held across Ireland and 62% of the population voted in favour of a change to the Irish constitution that reads as follows: “Marriage may be contracted in accordance with law by two persons without distinction as to their sex.” Even though Linda and I had travelled to Ireland previously to explore things old – and even ancient – here we were confronted with the new Ireland, moving deeper into the twenty-first century despite those billboards urging voters to stick to the old ways.

As we arrived in Sligo town, it was raining and jammed with traffic so we pushed on to Drumcliff on the N 15 for our first glimpse of Benbulben and the turn off that would take us to our rented home in the tiny village of Raghly on Sligo Bay. Falling asleep that night, I pondered again exactly what was it that kept drawing me back to the western coast of Ireland.

It was the ocean, of course, and the craggy land. And the people. But it always seemed to be more than that; something deeper – as if I was being called back to a place that had been home to me in another lifetime. Alas, as a fiction writer, such a notion has great appeal to me, but there are probably simpler explanations. I like rural, rugged places and am jealous of the Irish men I meet who can spin a most captivating tale in a mellifluous tone when asked even the most simple tourist questions like “Where is the closest store where I can buy a few cans of Murphy’s?”

The answer to that burning question was provided by an old gent standing by the side of the road in Cloughboley. It was a Sunday morning and he was propped up by a pitchfork and minding his own business and clearly in no hurry for anything. A true cynic might have thought he had been hired by Tourism Ireland to position himself there looking like a character from Ryan’s Daughter – waiting for travellers like us to come along. When I made my enquiry he immediately complemented me on my choice of Murphy’s over Guinness and told me that the Supervalu up ahead in Grange would do the trick.

“But I’m sad to say there is a problem,” he added, looking at his watch.

“Ah,” I said. A longish explanation followed and I could well understand the issue involved men choosing pints over piousness on any given Sunday morning here in the west, but I was afraid to ask why 12:30 instead of noon or even one pm. A compromise, I suppose, and no doubt a political one at that since it is hard to come up with a subject of any sort in Ireland that does not have a political tinge. 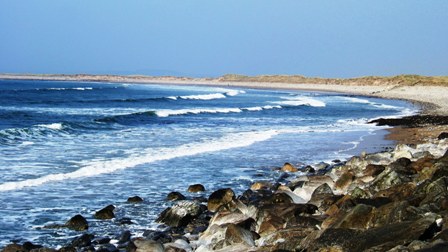 Our meanderings for the week involved mostly mountains and beaches. An early foray took us to Strandhill, world famous as a surfing mecca in these parts. There we discovered warning signs of dangerous currents and a number of touristy shops, but a short hike from the parking lot put us into a wilderness of white massive sand dunes where we could hike to the heavens and then bound down to sea level again in giant airy strides. We had lunch at a café called Shells in the town, run by a kind of hippie-surfer management that had pulled together a best-selling cookbook and attracted a bit too many tourists for my liking. Nonetheless, the food was good and there was a fine supply of incense in the attached gift shop that reminded me of my college days.

As always, my goal was to get us away from the must-see Fodor’s travel high points, and that took us north to Streedagh with one of the finest beaches I’d seen in Ireland. (Please, no one tell Donald Trump about this one, lest he want to ruin it with a golf course.) There were horses running free and clean blue waves breaking on the shore. We would return here later that week for a glorious morning of boogie-boarding and a signature sunburn to show off when we arrived back home.

Later I would use Streedagh Beach as a setting for a novel I was writing called Thin Places about a North American boy who hears voices in his head – those of a remarkable selkie who had come ashore in Ireland many years ago and lived through several generations, longing to fall in love one more time before returning to the sea.

In recent years, Ireland has become a true surf mecca and nowhere in the country is that more apparent than Mullaghmore and Bunduron, just north of Streedagh. 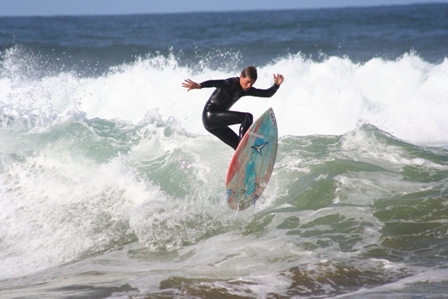 Mullaghmore Head on a big swell produces some of the most powerful and challenging waves in the world as the North Atlantic pounds all its stormy fury onto a slab ledge just off the coast. It’s a true do-or-die wave that taunts the Red Bull crowd, but should remain the playground of only the most skilled of the world’s watermen.

While Mullagamore town has plenty of the salty charm of an old Irish village, Bundoran has given itself over to “family fun” seaside resort facades and crowded streets. I’m sure the heart and soul of the place is alive beneath the fresh paint, however, and had I more time I would have poked around the docks and backstreets looking for old geezers with grand sea stories of years gone by.

But I had those broody mountains and empty beaches on my mind. On the drive back to Raghly we passed Malarkey’s Farm and I recalled my father often poo-pooing some of my brightest off-the-wall ideas by saying, “That’s a lot of malarkey.” I pulled the car over by Malarkey’s to pay homage to what was left of last year’s crop of Brussel sprouts and cabbage. How an Irish family name came to become a popular North American expression used to describe many a political candidate’s speech is uncertain. I wanted to drive up to the farmhouse and ask the proprietors if they could delineate the origin and evolution of this wonderful word, but my wife thought it a bad idea and reminded me we had friends waiting for us back in Drumcliff at the Yeats Tavern.

The tavern was indeed a friendly place where I was introduced to some local brews including White Hag IPA and something called “bog beer” which is purported to be “an imperial red ale, deeply malty with hints of honey, caramel, and peat, and full-bodied with a chewy mouthfeel, and a slight alcoholic warmth.” At 8.2% alcohol, the word “slight” is perhaps an understatement, but it did create a festive mood on a damp afternoon as the sun slipped across the Atlantic and away from these shores.

Linda and I tried to find a path to the top of legendary mountain, Benbulben, but my guidebook failed me in that regard and we only got as far as a great green pasture at its base where we encountered a friendly and inspiring horse that followed us around and claimed to have been a unicorn in a previous life. 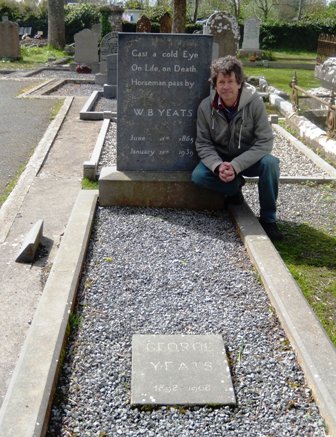 Beneath the great flat-top mountain of Benbulben, we paid our respects to the grave of one of Ireland’s most famous poets, W.B Yeats with this mysterious inscription on the headstone; “cast a cold eye on life, on death, horseman, pass by.” It was the poet’s wish that the words on his headstone be “no conventional phrase” and he certainly succeeded at that. At my request, my wife took a photo of me beside the famous grave to add to my collection of me posing at the graves of famous dead poets that so far included Yeats, Eliot, Wordsworth, Coleridge and Jim Morrison, to name a few.

A gift shop was only a few footsteps from the dead poet with some nice artwork and home-baked goods for those who had come to pay their respects.

As the week was drawing to a close, I was worried that I’d missed something important hereabouts so we trucked off to Carrowmore Megalithic Cemetery. Some of the tombs and monuments date as far back as 3700 BC, and that’s about as megalithic as you can get. It’s a tidy, grassy place today where children climb the boulders that once were part of “passage tombs” where one’s soul passed from this world into the next. It was one of those places that you feel the actual “weight of history” as you crouch down beneath a stone roof held up by pedestal rocks that were placed here over 2500 years before the birth of Christ.

Not far down the road from Carrowmore was the mountain I had been hoping for: Knocknarea, a thousand foot high limestone hill also of great ancient significance. It was windy and wild as we tromped through the sheep fields and upward into the heavens for a sweeping view in all directions. Strandhill and the sea were to the west, bays to the north and south, and green valleys and lakes stretching inland to Sligo town and beyond to Lough Gill. My heart was beating loudly as we trudged the steep path approaching the summit.

At the windy mountain top was a gigantic pile of hand-delivered rocks, a Cairn created 5000 years ago, commemorating an Irish leader named Maeve. Queen Maeve, as she was referred to, was an ancient noblewoman or perhaps a goddess who was very rich and very sexual. She famously stole a powerful bull from Ulster for reasons that may elude us today. She was not particularly well liked by her people, however, and it said they buried her at this elevated, remote mountain top where her lingering spirit could do no harm. Whatever the truth, a horde of dedicated citizens must have felt there was good reason to undertake the transport of thousands of heavy stones into these windy heights to form the grave. 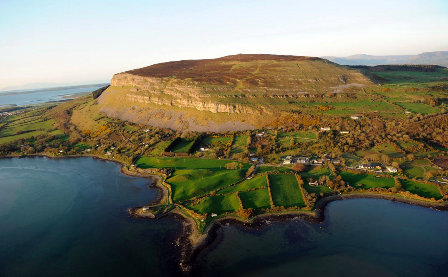 We watched a squall approaching from Sligo Bay and as the freshening wind whipped our light jackets and screeched in our ears, we began our climb back down. Thanks to Knocknarea, the new Ireland of craft beer and necessary referendums of gender politics had given way to the spirit of the oldest of the old Celtic culture. The word “sacred” seemed perfectly suitable here, and there was a feeling of mystery all around. We would descend back into the ordinary world, driven by the sea wind like sailors from days gone by, heading home to a warm fire in a stone house far from the maddening crowds of cities.