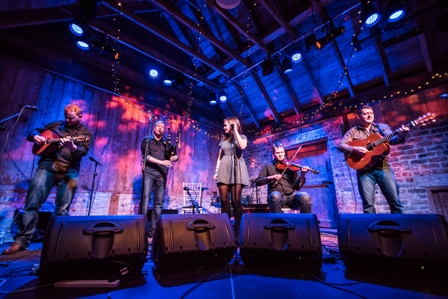 Three intimate, acoustic gigs on three picturesque Scottish islands in six unforgettable days and the end result is Dàimh’s The Hebridean Sessions – a dazzling new album as full of energy, art and historical drama as the rugged islands themselves.

“We are never a band for doing things the easy way,” declares Dàimh’s piper Angus MacKenzie.

Dàimh (pronounced Dive) comes from the Gaelic word for kinship. The five member band, which Irish Music Magazine calls “one of the most exhilarating acoustic bands on the Celtic map” has been making friends around the world with its contemporary and traditional takes on Highland and Gaelic music.

All band members live on, or within sight of, west coast islands; so they gathered on the islands of Mull, Skye and South Uist to record music and songs reflecting the hardship of the croft, dancing, drinking, courtship and unrequited love, which, to Mackenzie’s mind, covers the full range of the known “Gaelaxy.”

“We wanted to record the traditional tunes that we have been playing for years at wild dances and ceilidhs across the west coast and islands. The best way to capture the feel and spirit we were after was to take the recording studio with us rather than to go to the studio and to try to make it feel like an island.”

While touring the length and breadth of the United States last fall, they took the island theme a wee step further and arranged an American launch of the album on Lake Michigan’s Beaver Island. The response to the tour was so favourable, the band is already booked to be back in the north-eastern U.S. and beyond this coming February and March.

“There’s a trend these days to try to make things cool,” explains MacKenzie, “but we think our music, the Gaelic music of the west highlands of Scotland, is strong enough on its own and doesn’t need to be made into something it is not.”

MacKenzie’s pipes and whistles, Gabe McVarish’s genius with the fiddle, and Ross Martin’s dynamic guitar playing are all complemented by two new additions to the band, both of whom MacKenzie and Martin encountered and taught in music programs at Sabhal Mòr Ostraig, the Gaelic College on Skye.

Murdo “Yogi” Cameron of Glenelg is a multi-instrumentalist who plays accordion and mandola on the new recording, while vocalist Ellen MacDonald, whose family roots are in North Uist and Scalpay, has been staggering audiences and reviewers with her ancient Gaelic airs.

“With a top class female vocalist performing a slow, lyrical Gaelic song, it’s tempting to liken the clarity and purity of the voice to fine crystal. In Ellen’s case, the glass carries a dram of something smoky, maybe Lagavulin,” according to Folk Radio UK.

For all that, it is the pipes and the fiddle that dominate, though MacKenzie might argue it is the resonance of the auld language itself.

“Gaelic is at the core of what we represent,” he notes. “Three of us speak it fluently and the rest of us have plenty to get by with. It is also the music of the area we represent and that is what we’ve tried to portray in this album.”

The son of a man from South Uist, and a woman who descends from early Scottish pioneers in Nova Scotia, MacKenzie was raised in a Gaelic-speaking home in Mabou on Cape Breton Island. He came to Skye as a student almost 20 years ago and now he and his wife, a musician and Gaelic teacher, are raising a family there with Gaelic as their first language. Last year he brought the band to Cape Breton’s renowned Celtic Colours International Festival, and he is hopeful a Canadian tour is not too far in the future –  the cuts from ‘Heb Sesh’, as the band calls the album, would likely sound as sweet back home on MacKenzie’s native island.

McVarish, who now lives in Morar, the village his great-great grandparents left for the New World, was raised in North California and, like MacKenzie, returned to Skye to study the music of his ancestors.

When Dàimh began 17 years ago, it was a part-time band, performances taking a back seat to “real jobs” and individual musical opportunities. After its last album, Tuneship, the members committed to playing more.

“Early in the New Year we will be touring Scotland, Ireland and Iceland, and then we’ll be off to the US again,” MacKenzie shares. “We can hardly wait,”

Chances are that those audiences will be lining up to hear centuries-old, romantic tunes such as Lochiel’s Awa’ to France, along with songs of weary crofters hoping to exchange the hides of their dead cows for a bottle of the good stuff.