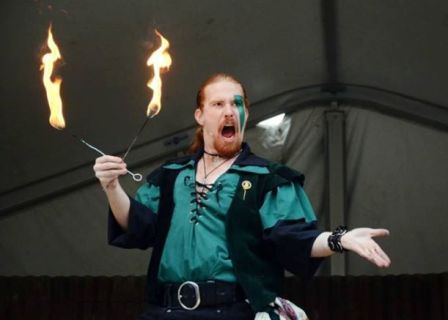 Daniel GreenWolf sees the practice of magic as an art form with a distinctly Celtic stamp.

“Magic is a great way for me to express my opinions and my heritage, which is primarily Irish, Swedish, Russian, Polish and French Canadian, while connecting with children and adults in a very childlike way,” shares the Connecticut resident by email.

As with all illusionists, GreenWolf thrives on the awe that audiences experience when confronted with something they were not expecting or did not think possible.

“It gets people to think and be skeptical at the same time,” he muses. “It is very paradoxical, and I love that element of what I do.”

The 31-year-old performer credits his mother and father with sparking his interest in magic at a young age.

“My parents have always been storytellers, and being Wiccan – a polytheistic religion focused mainly on nature – and fantasy geeks, they always made sure we got a healthy dose of magical tales in our lives.”

“He was wearing this outfit that looked like something out of Lord of the Rings, and he was doing an act with masks and cards that was unlike anything I had ever seen before.”

GreenWolf’s first mentor, Joe Lantiere, introduced him to the Inner Circle of Bizarre Magick, a small organization of ambitious magicians who aimed to be more than mere birthday party illusionists.

“They combined stories with unique visual artistry to create a different kind of magic. Sometimes darker, sometimes ritual-like, sometimes silly, but always magic with a meaning. I was instantly drawn to it.”

He also found inspiration in shock-rocker Alice Cooper, who incorporated the supernatural, theatrics and heavy-metal music into his live concerts.

“And then there was Michael Flatley; his penchant for the grand spectacle – a combination of Irish dance, modern theatre and ancient Irish themes – pointed me towards the kind of experience I wanted to create for audiences.’’

“Some of the stories are taken from thousands of years ago, while others are drawn from my own experiences growing up in an Irish family. It is a real mélange of humour, sincerity and high energy.”

One of his signature pieces is titled Irish Need Not Apply, which documents the difficulties of Irish immigration to the United States.

“It is very relevant, given the current climate of immigration issues here in the US,” he explains. “I get to shine a light on these things, and a lot of magicians won’t do that. I can be very personal with my story-telling in that regard. I don’t think a lot of magicians dare to bare their true selves, or their perspectives or beliefs, on stage.”

The biggest challenge of his profession, he notes, is shaking people from their preconceived notions of what a magic act can be.

“I wear a kilt and I perform in face paint, so I don’t fit the mold of the average magician.”

“There are people who think I am just an amusement act, others who absolutely love what I do, and even those who think that I am the spawn of Satan and possess evil powers – which, for the record, I don’t! And then there are those people who come up to me in tears because a performance has connected with them on some sort of deeper, visceral level.”

GreenWolf continues to grow that audience, recently performing for more than 10,000 people at Six Flags New England’s Fright Fest, and sharing the stage with a number of Celtic musical artists, including Enter the Haggis. His hope is to become a mainstay at Celtic festivals and Highland Games.

“People in North America, particularly in the USA, have a strong connection to their heritage – in a lot of cases because we are misfits. More art, more music, more books, and more shows will definitely resonate with anyone who feels even a little connection with Celtic culture.”