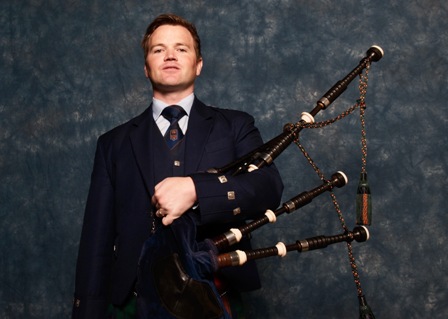 Doug MacRae remembers being captivated by a busker’s performance on an Edinburgh street while on holiday as a child with his parents.

“For whatever reason, I was captured,” shares the now 34-year-old via email. “And stranger than my interest was my parents committing, right then and there, to finding a store to buy me a set of bagpipes. They must have seen something to make such an impulsive decision and investment,”

Whether by chance or fate, MacRae took to the pipes with passion. He recalls his excitement at getting the sheet music for Amazing Grace, playing it constantly.

“The sound of the bagpipes is what inspired me to play. And though I continue to play for many reasons, fundamentally, it is the unique sound that continues to motivate me today.”

MacRae was raised in London, Ontario, and attended the nearby University of Western Ontario. After four years of teaching bagpipes at St. Thomas’ Episocpal School in Houston, Texas – where he led the band to a Juvenile World Championship – he returned home. Today, he continues to teach the pipes via Skype, while managing the shop at Scotts Highland Services.

“While there have been some competitive successes through my career, I would say the career itself is the highlight. The instrument has taken me all over the world and provided the opportunity to meet all sorts of people. The musicians and supporters in the piping community are kind and diverse, and unequivocally the source of joy that trumps any competitive prize or performance success.”

When asked if he is a traditional piper in terms of style and sound, he hedges.

“Some might argue what ‘traditional’ really means in terms of style and sound. It may be more accurately said that I subscribe to current styles and sound. Through its history, the bagpipe has raised its pitch so that today we are higher in pitch than the instrument has ever been.”

MacRae notes that when he performs with his band, The American Rogues – who are based in Baltimore – he plays at a lower pitch that complies with western scales.

“With the bagpipe in its own world in terms of tuning, special considerations have to be made when playing with other instruments. Fortunately, there is equipment available that makes this process easier.”

The American Rogues has close ties with the United States military.

“They have shown us a great deal of support, including our USO-type tours of Japan, Italy, Spain, Guam and Cuba, as well as our work with honour flights for World War II and Korean War vets,” notes MacRae, adding that the group is the official band of the national Navy Seal Museum. “We also do a show with the US Air Force Symphony at Constitution Hall in Washington.”

He enjoys performing on a variety of small pipes, but generally plays the Highland bagpipe when performing with his band.

“I play two sets that are quite different in terms of history and tonal quality. I mostly play a set of Duncan MacDougall bagpipes that were made circa 1890. The set has experienced a few cracks that have been expertly repaired over the years. The other set is a more modern set of Strathmore bagpipes built in the early 2000s.”

He adds that seeing beginners take an interest in the pipes is always gratifying.

“In Canada, especially out East, there are more school programs starting up where students have the opportunity to take piping as a class or extra-curricular activity. Here in Ontario, there are a few programs being integrated into the school system. Cadet programs are also huge contributors to the development of youth piping.”

He acknowledges there are many people “out there fighting to preserve Celtic culture”, though he also points out there are more demands on people’s time and less financing available for cultural events and groups.

“It doesn’t come down to funding exclusively, as the whole culture needs people, active people, active players, willing to teach bag piping and other Celtic music, along with organizers willing to host community events to support and promote the culture.”

MacRae will spend the summer competing on the festival and special events circuit while travelling with the 78th Fraser Highlanders to compete at the World Pipe Band Championships in Glasgow. When time allows he will continue to tour Canada and the US with The American Rogues.

He will never be too far from home in the coming months, however.

“My wife and I are expecting our second child together in July.”