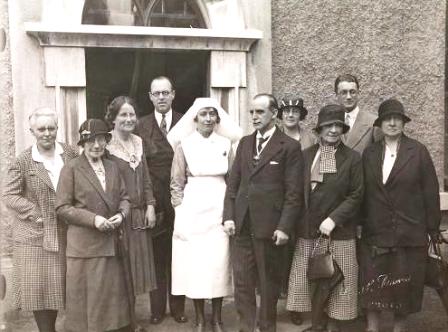 Kathleen Lynn was one of the great Irish humanitarians of the 20th century.

Her influence extended throughout Irish society with her work in hospital medicine, her fight against poverty and disease, her career as a politician and as a lifelong social revolutionary. She was a campaigner for women’s rights, known for her care and commitment to the poor and poverty stricken people of Dublin, and a much-needed voice in the Dublin slums of the early 1900s, advocating for better health care, better housing and education for all. She gave of herself freely, to help those in need, and it is due to her tenacious attitude of overcoming any obstacle that stood in her way that she was not bound by the conventional norms of society to become one of the most distinguished physicians in Ireland, known the world over. Both she and her companion, Madeline French-Mullen, were champions of the poor, neglected, down trodden people of Dublin and when she died, the people of Dublin were left bereft and mourned her like the true friend that she had been to them.

Lynn was born in 1874 in Killina, County Mayo. Her father was a Church of Ireland rector, and she was raised in a family that promoted kindness and care in all aspects of life. She was related to Countess Markievizc and their families were of close kin, socializing and meeting together, all of the same mindset, which was to support and aid the people of Ireland in any way possible. Raised in the aftermath of the Great Famine of 1845-51, she then lived through another famine, in 1878-89 in the west of Ireland, when the wettest winter ever saw the potato fail once again and disintegrate into the mud.

Greatly affected by the example of aid extended by her family to others less fortunate, she made the decision at 16 years of age to become a physician. The decision made, she set off to England for the first stage of her medical training, then moved to Germany to further her medical knowledge before returning to enroll at the Royal University of Ireland, the forerunner to the University College Dublin’s School of Medicine. Kathleen graduated in 1899 and immigrated to the United States, where she lived 10 years before returning to Ireland. Before she left Ireland with her companion Madeleine French-Mullen, she had bought a house in Rathmines in 1903 to which she returned to live with her friend until her death in 1955.

On her return to Ireland, gender bias made it difficult to gain an appointment to a hospital. She did not allow this to deter her from seeking employment as a physician.  At her house in Rathmines, she set up her own practice, against heavy opposition from the medical establishment. Sheer determination drove her to further her career within a hospital setting, so that by 1910 she had been appointed as the first female doctor in Ireland at the Royal Victoria Eye and Ear Hospital, serving from 1910 to 1916.

Always willing to support her family and friends in any way, and at the request of her cousin Countess Markievizc, she treated Helena Molony for chronic exhaustion that had beset Malony over a long period, allowing her to stay as a guest at her Rathmines home while treating her. Molony was eventually persuaded to leave Ireland with Maud Gonne, to travel with Gonne and be a guest at her home in France while Molony recuperated.

Influenced by Markievizc and Molony, Lynn became an active participant in the suffragist, labour and nationalist movements. She was a keen supporter of the workers during the 1913 Dublin Lockout and was also on hand to offer medical advice to all workers free of charge. She became very good friends with James Connolly and a firm supporter of the labour movement.

At the request of Connolly, Lynn joined the Irish Citizens Army and taught first-aid to all its members, alongside nurse Elizabeth O’Farrell, as well as to all of Cumann na mBann. In the weeks leading to the Easter Rising, she used her own car (a luxury for people in this era) to run guns into Dublin, allowing some of them to be stored at her own home. During the 1916 rising she was the chief medical officer at City Hall.  When Séan Connelly was shot dead by sniper fire while attempting to hoist the tricolor flag on top of City Hall, it was Lynn who was first on the scene. After the surrender, she was arrested along with all of the other women, including Markievizc, Molony, and French-Mullen (below), and was imprisoned in Kilmainham Goal. Some sources suggest that she described herself as a Red Cross doctor and a belligerent socialist to the army personnel who arrested her.

After her release from prison, Lynn continued with her support for all the poverty-stricken people of Dublin, which convinced her that a hospital for infants and their mothers was sorely needed. She then set out to recruit a group of like-minded women activists to form an alliance to open a Dublin hospital for infants and mothers. By 1919, this group managed to establish Saint Ultan’s Children’s Hospital, Dublin (below). The group’s goal was to provide medical and educational facilities for all of the impoverished women and children of Dublin.

This establishment was staffed by female workers only, including all professional and administration staff, cleaners, etc. Her rationale for this was,she wanted to ensure that women in general had the opportunity to play an important role in health care for all patients, and not least, to offer security and dignity to all those women and infants requiring medical care, and who preferred treatment by a female doctor. In this era, infant mortality in Ireland was high, at 150 infant deaths in every thousand births — the highest in Europe. The initial focus was on treating syphilis, passed on to infants in pregnancy. This was prevalent and endemic in working class Dublin women. St. Ultan’s Hospital grew rapidly, and from 1937 on became the center for BCG vaccination in Ireland, crucial to the effort to reduce the prevalence of tuberculosis there. The hospital closed in 1983.

By this time, Lynn had joined Sinn Féin, and was elected as vice-president in 1917. She played a role in the War of Independence, managing the wounded and dying in her usual supportive, no-fuss practice. She then stood as a Sinn Féin Tecchta Dála (TD) for the Dublin County constituency in the general elections. In accordance with the Sinn Féin abstentions policy of that era, she did not take up her seat in Dáil Éireann. In the June 1927 general elections, she lost her seat, and in August she again contested the by-election but was still unsuccessful.

In 1925, Lynn and French–Mullen visited New York, the Eastern seaboard and the Midwest to study American infant hospitals and social services. Her aim was to glean an understanding of how to treat mothers and infants, in an environment that was beset with malnutrition, tuberculosis, prostitution and poor housing. What they learned about was quality equipment, good care, quality doctors and nurses, and not least a community care program that would follow through with patients when they were discharged from hospital.

On their return to Ireland, she and French-Mullen set about recruiting for and resourcing community-care programs, and putting into place the measures that would be required to achieve their goal; this made a significant contribution to the eradication of tuberculosis, although it would take many more decades before it was entirely gone. One of the questions Lynn continually confronted was, “What is the use of saving babies — why do you want to cure them when they will just be sent home into the same conditions and unhealthy environment?”

Her answer was to pray and work together to give them the hope that can be provided with funding and resources. This funding was sourced by recruiting women volunteers, begging and borrowing, calling on wealthy friends for donations, using their own money, and putting a down payment on some property. Volunteers from all backgrounds queued up to play a part in this program; they secured the services of able, willing doctors and nurses. The community-care programs thrived, with mothers and babies attending classes, allowing the care-program workers into their homes to treat them on a regular basis.

Such was the charisma and dedication of Lynn and French-Mullen, who was quoted as saying “we worked, worked and worked — and did not stop until we had achieved our goal.“ By 1930, Lynn  brought Maria Montessori to Ireland and introduced a Montessori ward into the hospitals. Montessori, was a physician by background; she did however, specialize in the mental frailty of children (known today as Autism / Asperger’s) and had a proven record of teaching children with this ‘frailty,’ which was being accepted all over the world. Her methods of educating these children proved to be invaluable, and this clinic proved to be a huge success — as a result of the efforts of Lynn and French-Mullen.

By 1927, Lynn, with no political role to play in government, was becoming increasingly frustrated and dismayed by Sinn Féin’s refusal to embrace social reform and health care. She then left politics for good and concentrated her efforts and all her time to children’s medicine in St. Ultan’s, running her clinics until the spring of 1955 when she was 81 years of age.

When she died that year, Lynn was buried with full military honours in recognition of her role in the 1916 Rising, her role in the War of Independence, and not least her contribution to children’s medicine. Tuberculosis was partially eradicated by all the measure she had taken in her hospitals and clinics in Dublin. The people of Dublin lined the streets, openly weeping for this woman, who had become a friend to all who knew her.