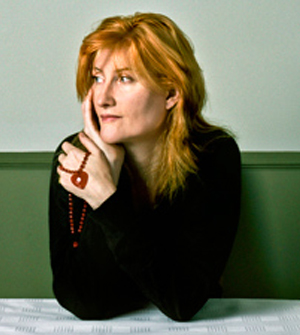 The Best of Eddi Reader includes the songsmith’s signature renditions of the works of Scottish national poet Robbie Burns, the chart-topping single Perfect, a new version of the old standard Moon River, and a cover of Amy Winehouse’s Love is a Losing Game.

“When I listened through to the ‘best of’ collection, I found myself reconnecting with every chord, melodic shift, percussion push and vocal thread,” shares Reader. “It reminded me of myself like little Polaroid photos. I can’t believe how beautiful it is – I’m very proud of this music.”

Growing up in Glasgow, the eldest sibling in a large working class family, Reader was irresistibly drawn to music and instruments from an early age.

“Music soothed and comforted me and excited me more than most other experiences. It was akin to the first bright spring morning I remember, or the warmth of my Gran’s hearth fire and biscuits, or my neighbours’ dog, Sheila, who became my constant companion as I trilled my way through my council estate, imagining it to be paradise.”

Reader toured Europe with circus and folk performers in the 1980s, before working in London as a much sought-after session vocalist. She harmonized with Annie Lennox and the Eurhythmics before forming the critically-acclaimed band Fairground Attraction, attracting a wider audience and releasing numerous best-selling albums.

The songstress notes that she never chose music – it chose her.

“Nature drew me to it. I just harnessed what I could out of raw instinct. Others who approved encouraged me to make musical noise wherever I went.

“I found that if I sang and played instinctively, it attracted a living. Without the cash I would have done it regardless – I’m not a businesswoman. Those are the challenges – to maintain that instinct and trust that all will be well even when your mind creates tricks to worry or panic you about feeding the kids and paying the rent.”

The rewards, she points out, have been a long working life and the ability to be freely creative – making life joyful and full of purpose.

It was her manager, Tom Rose, who pitched the idea of an album spanning her musical experiences.

“The truth is I could never choose a list of my own songs. I’ve written and recorded so many, I love them all. Tom surprised me by with showing me a tapestry of moments throughout my creative path in music.”

She hopes that her love of writing and performing shines though on the new album.

“I was surprised at how bonny it all was. I move on so quickly that some of that music felt like I was hearing it for the first time.”

While the initial response to the anthology has been favourable, Reader does not generally concern herself with reviews.

“I am very good at ignoring all things that judge. I like people, but I could never rely on them to know anything about what’s good or bad about these musical expressions, even if they are the experts.”

In keeping with her same free-spirited philosophy, she struggles to say whether her art is more inspirational or perspirational.

“I never notice the process – I only rest at the completion of the process. The real work is taking the joyful, inspired, musical dream and turning it into something I can wear and communicate with. I have to kick my own ass sometimes to do that work. I suppose it is the struggle with my own inner critic that I avoid.”

An avowed Scottish nationalist, roots are important to Reader, her own being predominantly in Glasgow, although she had an Irish grandmother from Tralee.

“I think our ancestors are our chain and we wrap around this blue planet in an ageless, timeless way, resonating their story, our story and the future story. To forget it is to forget life.”