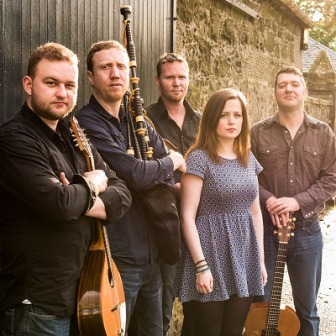 What is your own ethnicity/heritage?
DF: My father was English, my mother Scottish.  Her father was from Shetland.
DA: My father’s side are from Glasgow, my mother is from Aberdeenshire.

When and why did you get involved with the Festival?
DF: I’ve been involved in the Trad scene for the majority of my career and my work with TRACS and the Traditional Music Forum mean I’ve been involved with TradFest since it began in 2013 for its pilot. Prior to that I worked at Edinburgh City Council and was involved in TradFest’s predecessor, Ceilidh Culture, and before that I ran the Edinburgh Folk Festival.
DA: As part of my role as Program & Events Manager at the Scottish Storytelling Centre I helped with the formation of TradFest, which was a re-imagining of the Ceilidh Culture festival.

What are your roles and responsibilities there?
DF: At the moment mostly contributing program ideas and performers for TradFest.
DA: I manage the overall production and admin of TradFest, whilst also programming the Storytelling Centre as one of the main venues.

Why is it an important event for the community?
DF: It is important as a way for the community in Edinburgh to celebrate its arts of tradition – music, dance, storytelling, ritual drama and craft – and to welcome others out with the community to share in the celebration, bringing some of their own tradition and creativity to the Festival.
DA: It is a collaborative effort with many different performers and organisations creating and producing events, so it’s quite indicative of the traditional events that are already ongoing in Edinburgh. It’s important to celebrate the traditions within storytelling, music, crafts and dance, whilst also recognising how they are changing and progressing.

Who traditionally attends the Festival?
DA: As there’s such a mix of events there’s also a wide spread of audiences, which encourages people to attend what they know they like but also take a punt on something they’ve never attended but may love.  In the previous two years we have attracted an international audience and we hope to build on that so people visit Edinburgh specifically because of all the excellent events in TradFest.

What can they expect this year?
DA: The usual mix of events – ceilidhs, concerts and performances – but also a celebration of the local landscape and springtime.

How has the event evolved through the years?
DF: It is still in its early stages, but one of the important things that have evolved through the festival is its model of Co-Curation, with selected and programmed events by the TradFest team sitting alongside programming by partner organisations and events proposed and organised by artists themselves.
DA: The first two years were almost pilots, learning and shaping as we went, but 2015 was a real progression. There is definitely more awareness now and a lot of that is due to the great work of TRACS in promoting traditional arts and culture throughout Scotland.

Will you remain involved with the event in the years ahead?
DF: Hope so!
DA: I hope so yes! The Scottish Storytelling Centre as a year round venue is a real hub for traditional arts events across all genres, so we hope that we will continue to be central to TradFest as a spotlight event for traditional culture.

How else are you involved with the Celtic community there?
DF: I am Co-Ordinator for the Traditional Music Forum, a national network of around 90 traditional music organisations across Scotland. We are a point of contact and an advocate for traditional music and we work with government and public agencies to safeguard traditional music in Scottish social and cultural life.
DA: Mainly with the year-round programming at the Storytelling Centre, including the Scottish International Storytelling Festival in October.

DF: The situation in Scotland is probably better than it has ever been in terms of public support, with access to the culture widely available, widespread teaching and learning opportunities, and recordings alongside bigger flagship events like festivals.

What can we be doing better?
DF: There are still areas where we need to be more visible, especially in formal education and mainstream terrestrial broadcasting.