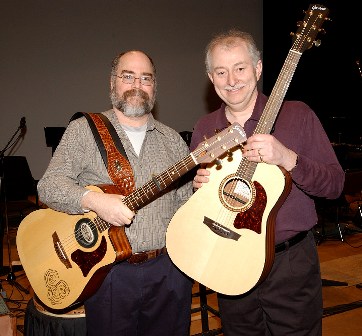 Unlike most musicians, Brian Doherty is not overly concerned with album sales or living the rock star life.

“Longevity is success, as far as I’m concerned,” says one half of the Halifax, Nova Scotia-based Celtic folk duo Evans & Doherty with a deep Irish brogue.

Alongside his musical partner, Kevin Evans, Doherty is celebrating more than 35 years in the music business. The group has been performing together for over three decades, recently acknowledging their accomplishment with the release of a two-disc set of 30 songs called 30 Years of Folkin’ Around.

“We put the album out to mark this musical milestone,” shares Doherty. “Some songs have been with us for all of those years, some are new, some were written by Kevin, and some are traditional tunes.”

Before the twosome teamed up, they played in other area bands. During the 1980s, Doherty explains, there wasn’t much of an East Coast music scene. “But we had a number of clubs, universities and theatres that we performed at regularly.”

Due to the limited number of venues, Barley Bree (Doherty’s band) ended up playing in many of the same places as The Garrison Brothers (Evans’ band). As such, the two knew each other well from the local circuit.

As fate would have it, Doherty left Barley Bree around the same time that Evans was departing The Garrison Brothers.

“We both wanted to pursue other careers outside of music, but we wanted to keep our hands in the music scene as well.”

The pair decided to perform together to, as Doherty puts it, “keep our hands agile.” From there, they began playing regularly at an Irish pub called O’Carroll’s in Halifax, performing five to six nights every other week for 15 years. Those gigs earned them a strong local following, and soon they were asked to participate in festivals and gigs outside of the city.

O’Carroll’s eventually closed, but Evans & Doherty kept at it, eventually opening a pub of their own, The Old Triangle. A popular eatery and watering hole in downtown Halifax, the “Triangle” also has locations in Sydney, Cape Breton; Moncton, New Brunswick, and Charlottetown, Prince Edward Island.

“As time goes on, our business interests have eaten into our performing time,” admits Doherty, “so we don’t gig as much as we used to. Still, things get pretty busy through March and April, mostly for Saint Patrick’s Day celebrations. And we perform at festivals across the U.S. in the summer months, as well as at events here at home.”

Evans & Doherty have taken their music outside North American also, playing in places as far afield as East Germany and New Zealand. Doherty is thankful for the people they have been able to perform with along the way.

“We have had the good fortune to work with some of our musical heroes; people like Liam Clancy and Tommy Makem – they were one of the stem groups that started what is now called traditional Irish music, and they were among the first to bring it to the North American market and beyond.”

Naturally, after three decades of sharing the stage, the pair has become more and more in tune with one another.

“Performing kind of becomes second nature to us. I know what Kevin’s thinking, and he knows what I’m thinking. That kind of interaction has made us much musically tighter over time.”

At this point, the pair are not out to make their mark on the music business. Instead, Doherty says he just hopes people appreciate and enjoy what they do.

“We are there more to perform at really good venues and play where we know people will come out and see us.”

For 2016, Doherty says that he and Evans are going to “keep doing what they do.” Local fans can catch the group regularly at The Old Triangle, while others will have their chance during festival season.

“And, hopefully, we can keep doing what we do for another thirty years.”