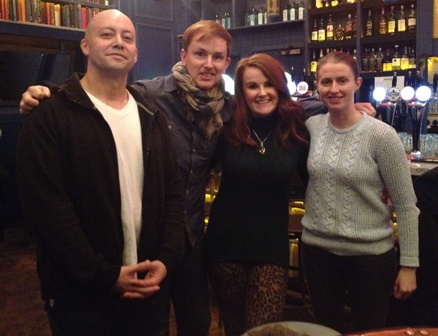 Irish poet W.B. Yeats once wrote “There are no strangers here, only friends you haven’t met yet…” Nowhere, perhaps, is this truer than in Dublin.

Though the Irish capital has a long, rich and robust history – most estimate the city was established by Vikings in the 8th century AD – it wasn’t until very recently that Dublin could be called a food and drink destination.

“Twenty or thirty years ago, Dublin didn’t have the kind of delicious diversity it enjoys today,” says Seana Cooke of Irish Food Trail, the city’s foremost culinary tour company. “The boom of the Celtic Tiger really opened the door to both economic prosperity and immigration, resulting in a host of new foods and flavours for the whole country.”

A retired professional soccer player, Cooke is both engaging and entertaining as she leads our small group – including two Dubliners (Paul and Michelle) and an American (Glenn from California) – towards the city’s bustling Temple Bar Food Market.

Less than a decade old, the open-air bazaar affords eaters the opportunity to meet face-to-face with local and area producers. Traditional stalls showcase fresh fruit and vegetables alongside an array of all-natural, home-baked goods. A modern take on an ancient idea, the aromatic agora continues to grow in popularity with foodies of all ages.

Nearby, the award-winning Gallagher’s Boxty House blends the best of old and new world cuisine. Here, the Irish potato-pancake is twisted, tweaked and turned on its head with dumplings, bacon, leaks, salmon, spinach, sundried tomatoes and more. A bed of bay oysters accompanies, and whets the whistle for the feast to follow.

Down the road, across from Trinity College, Gallaher & Co. Bistro and Coffee brings a mixed-bag of past and present to the table. Built in 1891 by renowned architect J.F. Fuller, the heritage building served the community as a tobacco shop for over a century. Over that time, the site survived revolution, economic rise and fall and recovery, as well as changes in ownership and direction. An eatery for the last 20 years, the spot now serves up a mélange of Irish and Euro morsels, including Beef and Guinness Stew, Warm Leek and Mushroom Tart, bruschetta, and breads and cheeses of all sorts. The venue’s vibrant veneer works well within the walls of the elderly edifice.

Back in Temple Bar, in the shadows of the magnificent, 985 year-old Christ Church Cathedral, Oscar’s Bar is a spectacular setting for something sweet. The chic, stylish saloon would be right at home in Manhattan’s Lower East Side, or Montreal’s trendy Plateau district, and – interestingly – the uber-hipster low-set lighting and chrome furnishings make a fine fit for a classic Irish Coffee and dessert.

And while Dublin enjoys a cornucopia of classic and contemporary culinary options, Temple Bar is the go-to spot to tempt the taste buds. All types of global gastronomy can be found here, including delicacies from across Europe, North and South America, the Middle and Far East, Africa, and beyond. Whether out on the town for fine dining, a casual meal, or late-night, take-away fish and chips, there is surely something to satisfy all hungers.

Without good company, however, eating in Dublin – or anywhere for that matter – might leave one feeling empty. On this day, however, the conversation is excellent, and the dialogue ranges from horror films, gay marriage, arts, rugby and South Park, to Handel’s Messiah, political activism, Irish accents, ice hockey, and South Africa. Discussion is often spicy, though well-seasoned with Irish warmth and wit.

Also of note is the absence of android phones and other mobile devices during meals.

“My parents wouldn’t have it,” smirks Cooke, as the three-hour excursion comes to a close. “In fact, I don’t know anyone’s family that would allow phones or tablets at the table. Here in Ireland, we talk to one another, face to face – gift of the gab and all that.

“So, whether it is over breakfast, lunch or dinner, or at afternoon tea or with an evening pint, even the greatest of strangers can become the best of friends.”