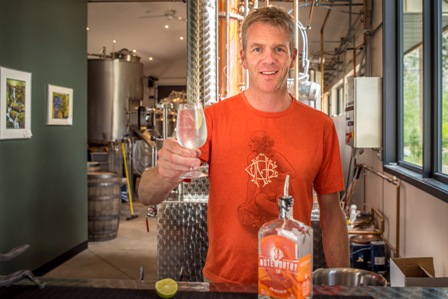 To say there is a craft distilling currently underway boom in Canada is a gross understatement. In British Columbia alone – the epicentre – there were more than 34 craft distilleries operating last year, a figure that may double over the coming decade. And while the boom might be especially prominent in BC, the trend is a national phenomenon with distilleries popping up coast to coast to coast.

In early June, during a heat wave, I made the eight hour drive from Calgary to Oliver, BC, to pay a visit to one such facility. Dubh Glas Distillery was established by Grant Stevely near the southern end of the Okanagan valley in 2014. It took 5 years of research, planning – and no shortage of red tape – to see the project through, but later this month the company will be celebrating its 1st anniversary.

Stevely, as he’s affectionately known, built the distillery on a small parcel of land a few kilometers north of Oliver. The current locale is small, and crammed with brewing, milling and bottling equipment, as well as a custom Holstein still and a small bar for visitors. Built with expansion in mind, the property has plenty of room for warehouses when they are needed down the road. Situated just off the main road, the site is very accessible to the throngs of tourists who visit the Okanagan in the spring, summer and fall for its warm weather, beautiful lakes and renowned wineries. But most crucially, the distillery sits atop a pure water source, the inspiration for its name, DubhGlas (dugh-luhs), which means “from the dark water” in Gaelic.

The vision for DubhGlas is to create world class craft whisky, mainly single malt, though Stevely is also interested in pot still (an Irish style) and rye whiskies. To generate some cash flow, excitement and traffic, the distillery’s first commercial product is a gin that has been taking BC by storm. The award winning Noteworthy Gin, billed as a New Western Dry, is made from BC barley in a copper pot still. The spirit is purified during the first two of three distillations, with the final one used to infuse the botanicals. The gin has been so popular that it has greatly delayed whisky production at the distillery, which is only now just starting to pick up steam.

While the gin is fabulous, it was the whisky – specifically single malt – that drew me to the distillery. I’d driven from Calgary with a Bernheim Kentucky Wheat barrel carefully secured in the back of my Volvo. The barrel matured a whisky I had bottled for my shop, the Kensington Wine Market. With a lot of life left to give I didn’t just want this barrel to dry out – it still has a lot of life left to give – so I hit on the idea of filling it with Canadian whisky.

The process of distilling single malt spirit (it is only whisky after 3 years in oak) takes nearly a week when you factor in the milling, mashing, fermentation and distillation. For my own whisky, Stevely had already milled the barley, fermented the wort and performed the first distillation beforehand, so we would have time for the final distillation during my visit, a process that takes nearly 10 hours.

Everything at Dubh Glass is done by hand, from moving around bags of malt, to filling the mashtun and even the stills. There is no automation; bags of malt were emptied by hand into the mill and the resulting grist carried by hand in the same bags to start the mashing process. Hoses have to be cleaned, moved and hooked up to move everything from hot water to wort, wash and spirit. Even the bottles are filled and labelled by hand. After a full day of working around the distillery I was exhausted, but we’d filled my 200L barrel with single malt spirit at 62.5%. The angels will take their share – possibly as much as 10% a year – and the hot semi-desert climate of the southern Okanagan will age the spirit into mature whisky in just a few years.

For Stevely, the Dubh Glass Distillery is not a road to riches, it is a passion project. When asked by a well-known retired distiller whether he would rather be rich from making a lot of whisky or respected for making good whisky it didn’t take Stevely long to give him an answer. While he’d prefer both, the recognition was far more important. He keeps a foam roll on hand for sleeping in the distillery when working through the night – a frequent occurrence. I asked him how far away his home was, and I loved his response, “this is my home.”