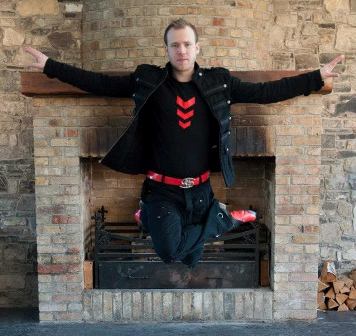 “It is something that I am very careful about,” explains the Bristol, U.K. native about his five year old project. “I never want to overstep the boundaries so far that everything gets fused together beyond recognition.”

Of Irish heritage, Naish followed his older sister into dance at the age of four.

“My mother was a champion Irish dancer when she was younger,” he shares. “So when Irish dance classes were advertised at the local community center in Bristol she put my sister in. The teacher kept asking every week if ‘The Boy’ wanted to join. My mother was a little hesitant at first, but she finally gave in once the teacher offered free lessons.”

That was back in 1983 when Naish considered dance nothing more than “a bit of fun.”

By the age of nine, things got serious when he joined a more established dance academy, Sean Eireann McMahon.

“Our teachers, Rose Ellis and Gordon McMahon, were renowned for competing at the highest level, so we found ourselves deeply involved in the ultra-competitive, cut-throat circuit of Irish dance.”

Those years garnered him an array of awards, including All Ireland and National titles, as well as World Champion in ceili and figure dance teams. It wasn’t until the revelation of Riverdance, however, that Naish knew with certainty his future would be in the performance side of the art. He later danced with Michael Flatley in corporate shows for both Riverdance and Lord of the Dance, and was a principle dancer for Celtic Woman’s 10th anniversary tour.

Despite the great experiences and considerable success, Naish yearned for something new and uniquely challenging.

“The idea for Fusion Fighters came when I was living in New York, and working for several years on how to fuse a variety of dance forms that I was trained in – Irish dance, body percussion, tap dance. I would often arrange experimental collaborations.

“I just knew I couldn’t stop until I created my own company with performance opportunities and workshops where I could make this new dance form available for others to both watch and learn.”

Since then, Naish has been presenting his work in fresh and unique ways – something he is proud to pass along.

“The dancers have been adapting quickly, which has meant we can now perform even more elaborate pieces and with larger groups. The production is getting much better over time and the videos we are producing are becoming more professional and gaining more exposure through our growing community.”

Sustained by encouraging feedback from both his dancers and the audiences, he tries to appeal to each.

“People from all over are really excited to see something new, but glad we’re still keeping the traditions of Irish dance and music involved.”

At the end of the day, he wants the performances to have a Celtic vibe, featuring enchanting Irish music and the power of Irish dance – the very things that attracted him to the art as a youngster.

Fusion Fighters was recently this year’s guest performers at the World Irish Dance Championships in Glasgow. The troupe also hosted a major show in Limerick featuring workshops, seminars, video projects and performances. With a cast of more than 40 highly skilled international dancers performing traditional Irish dance, body percussion, tap, sean nos and contemporary dance, Naish assembled a full stage production in one week. Speaking before the event, he predicted it would give a new generation of Irish professional dancers extensive experience in what it takes to perform show choreography for a live audience.

“I enjoy working with today’s generation of dancers on projects that completely modernize Irish dance and challenge how performance can be presented.”