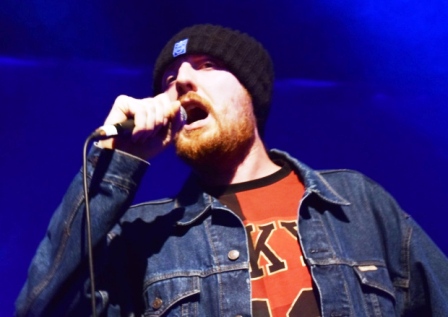 Underneath the huge glitter-ball of Glasgow’s ABC nightclub, the scene on the packed dance-floor bears more resemblance to a rave than to the Royal National Mod.

Striding around on stage with the microphone, sporting a smart waistcoat, tartan trousers and Adidas trainers, is Highland singer Griogair Labhruidh, the brand new frontman of the Afro Celt Sound System.

Now performing under the name Ghetto Croft, he is one of a new breed of Gaelic singers winning over crowds in village halls, nightclubs and festival arenas – by embracing world music, club sounds, techno and hip hop.

Growing numbers of cutting-edge electronic acts are turning to Gaelic singers to add new elements to both their recorded albums and live shows in what national arts agency Creative Scotland is describing as “an explosion of genre-defying music collaborations.”

The ancient language is said to be reaching previously unprecedented numbers of people internationally thanks to partnerships being formed overseas by some of Scotland’s leading performers.

Growing opportunities to learn Gaelic, developments in new technology and increasing self-confidence among Gaelic performers are said to have helped propel the new trends.

An increasing interest on Scottish culture overseas and even the debate over Scottish independence are also said to have helped.

Brian Ó hEadhra, Gaelic arts and culture officer at Creative Scotland, said: “There has been a growing interest in Scotland in the last couple of years.

“People seem to be particularly fascinated by Gaelic, which has such a wealth of songs and different styles.

“There is definitely something going on where people are accepting Gaelic music and electronica together. It’s been bubbling up for the last few years, but it is now getting to a much more professional level and a bigger stage.

“All these singers are very well-known as traditional solo performers, but they can also perform comfortably with electronica or heavy beats. They’re not coming out of nowhere.”

He said: “Anyone in their right mind who is interested in Scottish folk or traditional music and wants to get into the real roots of it really should be listening to Gaelic song.

“The richness and strength of the musical traditional in this country has all come out of the really ancient Gaelic song traditions.

“There is definitely more of an acceptance of Scottish culture now. Certainly within the arts community there is not the same Scottish cringe thing going on, which there used to be.

“I’ve had a great response so far. It is getting the rhythmic poetry out there in its purest form.

“It’s been quite funny – I seem to be getting a whole bunch of people who have never listened to hip hop before quite into it now.”

Long-running Celtic bands like Shooglenifty, Salsa Celtica and Breabach are among the acts to now feature Gaelic singers like Kaela Rowan and Megan Henderson in their line-ups.

Other singers like Maeve Mackinnon, Ellen MacDonald, Darren Maclean and Kathleen MacInnes have performed with Sketch and Niteworks, two Skye-based acts who marry traditional sounds with clubbing beats and electronica.

Inverness-born MacDonald, who opened last month’s Scots Trad Music Awards ceremony with Niteworks, said: “I think it’s a pretty natural thing for them to use Gaelic songs as they were all surrounded by them growing up and I’m sure it’s one of the things they were and still are influenced by.

“They understand what the songs are about and I think that really comes across in their arrangements of them.

“Singing live with bands like Niteworks is different to any type of live performance I’d done before – you’re having to think and rely on different things such as laptops.

“They attract a different kind of audience as well and there’s always a great buzz and energy from them.”

Simon Thoumire, founder of the Scots Trad Music Awards, said: “Technology has made things a lot easier. It’s very easy for people to get started, make music at home on their laptops and self-release their own music using their cultural influences. Gaelic culture is very malleable.

“But I also think there is a trend throughout the world for people to look closer at their own culture and language – Scotland is a great example of that.

“There aren’t the barriers around Gaelic there that there used to be. What I really love about the use of old languages with modern beats is that it opens the door to lots of new audiences.”

James Mackintosh, drummer with Shooglenifty, said: “We all appreciate the pure thing and totally respect the tradition, but it is great for people to be able to hear Gaelic in different contexts and hear how beautiful and evocative it is.

“The response we had last year when Kaela started doing a few numbers with us was phenomenal. It adds a completely new dimension.

“There is a real richness of songs out there and it is a huge part of our heritage. It wasn’t so long that Gaelic was banned from schools in Scotland, so to see it coming back like this is so exciting.”