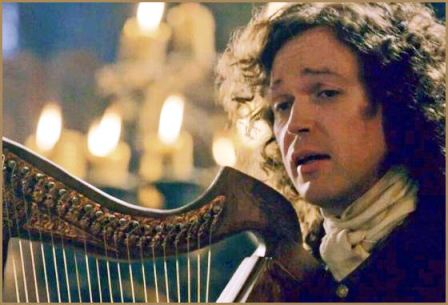 Growing up in South Uist, Scotland, Gillebride MacMillan fell in love with the language and culture of his forbearers

“Gaelic is my first language,” shares the charismatic singer and actor over the phone, “and Gaelic songs and traditions were an essential part of my family life. From a very young age, I knew that keeping that past alive was important, and I took it upon myself to play my part.”

True to his word, MacMillan has carried that past into the present though the years, releasing two Gaelic music CDs, performing countless concerts in his native tongue, competing in language competitions at home and abroad, writing, translating, studying and teaching Celtic culture, and talking to anyone who would listen at speaking engagements.

In recent years, MacMillan has brought that gift of Gaelic, and a greater sense of authenticity, to the set of acclaimed STARZ series Outlander, where he was cast as the quirky Bard Gwyllyn.

“It has been an amazing experience so far, and I cherish the opportunity to create a greater sense of awareness of Gaelic through Gwyllyn’s character.”

Behind the scenes, he has worked closely with the series’ composer Bear McCreary.

“Bear is one of the most talented and creative people I have ever met,” notes MacMillan. “He can read a scene, and instinctively knows what it needs to take it to another level. Outlander would not have the same kind of emotional impact that it does without his musical contributions.”

He echoes that sentiment about his Outlander cast-mates.

“We are very close on set, almost like a family of sorts. And we have a lot of fun working together – there are always plenty of laughs to go around. Make no mistake, though, these people are all professionals, and when it is time to get down to business they get the job done quite effectively.”

He speaks glowingly of Outlander author Diana Gabaldon as well.

“She is an incredibly intelligent and inspiring woman, and she has been very involved with the entire process of bringing her story to the screen. I greatly admire her commitment to educating herself on Scottish history, and in particular, the preservation and promotion of Gaelic.”

While the smashing success of Outlander has indeed raised the language’s global profile, MacMillan believes that more needs to be done to ensure its survival.

“It starts with public will,” he explains. “If the demand is there, then the supply will come. Governments, both in Scotland and abroad, can create more funding opportunities to develop educational infrastructure. And schools, especially primary institutions, can make it a core piece of their curriculum – young people soak up second languages like sponges.”

To that end, he continues, learning Gaelic needs to be more than merely an exercise in education – it needs to be entertaining and engaging.

“I like what I see happening at a place like the Gaelic College in Nova Scotia. Their emphasis on the total cultural experience – history, literature, music, dance, crafting, kitchen parties and other events – brings the bigger picture to its students, giving them some sense of context to the language.”

“The number of websites now dedicated to Gaelic is impressive,” notes MacMillan. “And there seems to be more of them popping up each week – apps for mobile devices also. It is exciting to see the language take off so quickly through these technologies – in just a short time it has been able to accomplish something that, previously, had taken generations.”

Popular culture is making a difference as well.

“Obviously, Outlander has had a major impact on visibility,” he says. “And now there are Gaelic comic books and graphic novels out there, and films and music done entirely in Gaelic. Highland Games and Celtic festivals are also another great way to get the word out.”

Other events, including The Pipes of Christmas in New York City each December, carry the message to new audiences.

“Bob (Currie, event founder) has done a wonderful job keeping the language, and Celtic culture, contemporary and relevant. I am proud to have performed there in the past, and I look forward to contributing again in the future.”

While scheduling restrictions will keep him away from the Big Apple this holiday season, MacMillan has a full slate on his plate for the coming months and into 2016.

“Outlander is shooting its third season,” he shares, “so that is keeping me busy. And then there are the performances and appearances – house concerts, speaking engagements, private functions, etc.

All of it, he adds, to serve the history and heritage of a once-endangered language.

“The reasons I still do it today are the same as those when I was a little boy growing up in South Uist – our past can help to guide us through our present and our future.”