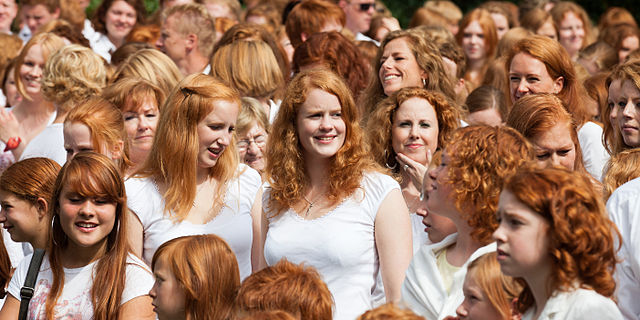 The quaint seaside village of Crosshaven, Cork, will come alive this weekend for the annual Irish Redhead Convention!

Now in its seventh year, the weekend-long ginger extravaganza will be filled with fun, freckles and frolics.

Thousands of redheads near and far will flock to the usually-sleepy village for a festival of extraordinary uniqueness, which raises vital funds for the Irish Cancer Society. From carrot tossing championships and live music on the Foxygen and ElectRED Picnic stages, to seminars on redhead history and ginger speed dating, there’s something for every redhead and redhead appreciator at the Irish Redhead Convention!

Once again, amidst a flurry of redhead competitions for the reddest eyebrows and the world’s greatest ginger beard for example, the coronation of the new King and Queen of Redheads will also take place, which is a one-year-long reign over the land of Gingerdom, representing Gingerkind.

Orla Gartland, Miles Graham and Gary Lamont, actor and soapstar of Scotland’s “River City” will red-headline the Foxygen stage, which is reserved just for gingers. And for the first time ever, the Irish Redhead Convention will host the highly coveted MOGO (Music of Ginger Origin) Awards, with public votes already counting towards crowning winners such as Best Irish Ginger Musician, Services to MOGO and Best Ginger Newcomer.

Festival organizers also hope to set a world record for the largest redhead ceili dance, encouraging attendees to get jiggy together, with music accompanied by a traditional band called Ginger Nutz, naturally made up entirely of redheads and lead by Ceili Fit instructor Fionán Cogan.

Jacky Colliss Harvey, author of “RED: A Natural History of the Redhead” will present a seminar on the most influential Irish redheads in our history and will explore red hair throughout the ages including science, religion, politics, feminism, literature and art.

This family fun festival is suitable for all ages and all hair colours. The Kids Zone will include activities such as Redheads vs Non-Gingers tug of war, orange lawn bowling, giant ginger jenga and a treasure trail teaser bringing you around Crosshaven.

The Irish Redhead Convention is charity partners to the Irish Cancer Society.

Redheads are one of the most susceptible groups to melanoma and other skin cancers. The message for all fair and freckled friends is to be “SunSmart” by seeking shade, covering up and wearing lots of sunscreen with an SPF of 30+. 20% of all ticket sales will be donated to the Irish Cancer Society who provide cancer care, research and support in Ireland. To date the Convention has raised over €30,000 for the national charity.

“I’m really excited about this unique Irish gathering of redheads from across the globe, ” says Joleen Cronin, festival founder and event organizer. “It is a coming together of friends new and old. I love that we all share common experiences as redheads and there is an understanding and camaraderie as we all stand together. For once we are the majority in the crowd and to be a part of that is an incredible, fun, empowering and life-changing experience.”

Red hair is the rarest of hair colours and accounts for only 0.6% of the global population. Ireland has the second highest proportion of redheads at 10%, but up to 40% are believed to be carriers of the ginger gene.