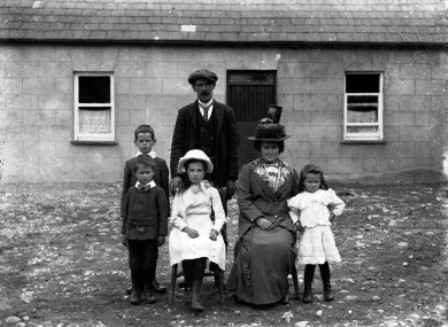 ‘Ellen, James, get those hands and faces washed. He’ll be here soon.’ Mother’s rump swayed in time with the stirring. I watched her offer a silent Hail Mary with each rotation of the spoon: Holy Mary Mother of God, bless us with tender flesh from this mean aul bone.

She rubbed the window with her apron, and peered out before moving back to the fire.  Mother’s lack of stillness was new to me.  ‘Lord above!’ she said staring at the layer of soil covering the bottom of the turf basket, ‘There’s not enough to last the night!’ The cold basin of washing water had not yet been touched; the soap was dry and cracked. ‘Ellen, leave that. Go get the turf first. Ask Mrs Heaney. Tell her we’ll pay her back, once your father’s here.’

My father’s return had been sung like the song to soothe all ills. But I hated this. The begging. I knew Mrs Heaney would give me what we needed – after making me remember I was the child of a useless man.

Brilliant sunshine cut through the smoky gloom as I opened the cottage door, ‘and don’t get muck on your dress!’ shouted mother from somewhere inside.

Mrs Heaney’s was a few hundred yards away across the bog. Tucking up my skirts I carefully placed each foot gently onto the damp soil. There was a sucking softness that stole my speed, and despite my effort, tiny splashes of brown soon speckled the hem.

Mrs Heaney was not a motherly mother despite all her practice. She’d had eight stringy little children. They all looked the same, all having streaky sallow skin and streaming noses. Two had died. I couldn’t even say if they’d been boys or girls.  Mrs Heaney’s hard worn face came to the door. She had that straggle of a baby on her hip, the one with the wheezy look about it. It stared at me without blinking, crusty green crystals gluing his long lashes together. I made our request, starting and ending with a promise.

‘Aye that’ll be the day…when we see Frankie McLaughlin with some money.’ She looked at me in my best, tucked-up dress, with its pitter-patter mud pattern. ‘You’d better come in,’ she said thrusting the baby at me. ‘I’ll leave you a pile by the door. Count out four of those good apples for your mother. I can’t have her welcoming him home with a plate of that stew. I saw the bone she bought from Paddy Nugent. More meat on a dry stone wall.’

I knew she was being kind, but her kindness was like a razor sharpened in pity for my mother and disgust for my father. But loyalty gave me a voice: ‘He’s got gold you know!’ I blurted out. ‘He said in his letter he’d bring a big lump just for me!’ Mrs Heaney gave a snort and bent down close to my face so I could feel her spit, ‘Well when you’re all cosied up in the Big House make sure an’ invite me round for tea!’

I wandered back through the bog, my skirt cradling four ripe apples, arms aching with turf, each ginger step through the wetness splattering its message of hope.

I looked towards our wee house like a pearl against the grey and blue smudge of the sky. But now there were figures outside. Mr Sweeney’s cart was drawn up and the horses were eating the cabbages while no one stopped them.

Father! Father was back!

I ran through the thick brown mush, each step adding another layer of peat to my sole. An apple slid from my skirts, my shoe was sucked from my foot, but I kept on running until I was free to drop my cargo. Bursting through the door, my sun-blinded eyes fumbled through the darkness for him. Mother was stirring the stew with a dreadful urgency. The men at the table turned.

‘What have you gone and done with your shoe. Look at the state of ye!’ said Mother, her voice fading into nothing.

‘My wee Ellie!’ Spreading his arms wide he waited for me, but I shrank into the shadows. One of his eyes grew moist with every second of my delay, but the other was gone. A patch of black covered the empty socket. With terror, I pictured what lay hidden beneath. ‘Don’t be frightened child. The dynamite sent a wee shard into my eye. The other’s twice as good now. I can see right into that gleaming wee soul of yours.’ The rough laughter of men made me want to block all viewpoints to my soul. I was glad when Father stood up to take them to the door. He resumed his place, the space that had held its breath for his return.

Mother put the bread on the table and began ladling out the stew. My brother, James, I realised, was attached to her skirts and they moved as one from the fire to the table.

‘Look here, I brought you something, like I promised.’ His hand slid to the leather bag at his feet. He drew out a parcel of rags. Placing it on the table he began peeling back the layers of cloth, the hours, days, months, years we had waited. For a moment it seemed the table had caught fire, but then a knowing spread through me like the Holy Ghost. His promise.

The gold shone from the universe of our kitchen. James crept out from behind mother and his face was lit by it. The rays pulled me closer.

Mother dropped the ladle so violently I felt the hot stew scald my arm. ‘Well, why don’t you tell her why you’ve brought it home, Francis? Why you didn’t cash it in for the money to pay for our food and the debts we have across half the county.’  Father took a long drag on his pipe and did not answer. Silence waited anxiously until mother answered her own question, ‘It’s fool’s gold, Ellen, not worth a penny. God help us! Fool’s gold! Well, I’ll tell you who’s the biggest fool around here.’

At this point, I couldn’t work out if she meant my father, for thinking a lump of worthless mineral warranted the energy of digging it out and bringing it all the way to Ireland from the Sutter’s Mill; or if she meant herself for marrying him: this faithful, gentle, useless man.

My hand slipped into his, scratchy and callused, and I smiled. He turned his seeing side to check mother was busy with the tea, and tugged my arm guiding the fingers to his pocket, to a velvet purse. With a sharp inhalation, my hand drew back. I had felt the hard edges of coins, many of them trapped tightly in that soft little bag. Mother sat by the fire, her expression shielded from us with a raw hand. Father winked his one good eye, alight with the fire of our secret and whispered, ‘You go tell her. We’ll show them, Ellen. We’ll show them all.’ ~ Story By Mairi McCurdy

Mairi McCurdy is a member of a woman’s writing group in County Down, Northern Ireland. The group is profiled in the February 2016 edition of Celtic Life International Magazine.