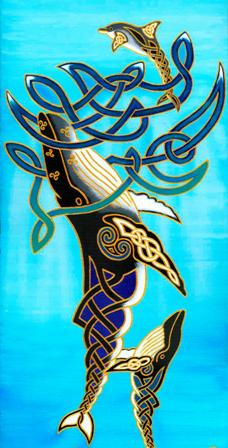 Named Scot of the Year by the Caledonian Society of Hawaii six years ago, Hamish Burgess is still finding new ways to promote Celtic culture. And while the Pacific paradise’s expansive beaches and rolling surf might seem incongruous with Celtic traditions, it has given the transplanted Scot marvelous opportunities to share the culture of his ancestors.

“I was happily an instigator of having Douglas Herring’s now famous Hawaii Tartan created in 1997,” he shares via email. “It was actually made into kilts to be worn here in Hawaii before it was officially recognized by the state in 2008.”

Burgess has also been Scottish ambassador for the Princess Ka’iulani Project, taking the story of Hawaii’s most beloved Hawaiin-Scot back to her father’s homeland in 2009.

His lifelong passion for all things Celtic was brought on by the love he and his brother shared for Celtic art from the time they were teenagers. With solidly Scottish ancestry, Burgess was raised in a Scottish household in England and later spent a decade in the Celtic stronghold of Cornwall. Lured by the surf and scuba diving possibilities, he immigrated to Hawaii in 1992, and was soon taking in Highland Games events in Honolulu. His first piece of Celtic art adorned his own black station wagon. By 2002, he was seeing more extensive marketing possibilities for his work, along with importing Celtic-themed products from Cornwall, Scotland and Ireland.

“I had the crazy idea that the Celtic pewter art and jewelry I had always liked in Cornwall might sell over here. Me and my partner, Jennifer MacKay Fahrni, ordered a stock of items and signed up as a new vendor. From there, our company – Maui Celtic – has become the biggest vendor in the region over last 11 years.”

Although Maui Celtic sells mostly online, its website incorporates Burgess’ other ventures, making it a resource and archive for all things Celtic, including a syndicated radio show he has hosted since 2003.

“I promote Celtic culture here and internationally every week as a volunteer presenter and producer of my Celtic music radio program, the Maui Celtic Radio Show,” he explains, noting the program has brought him new opportunities.

“A radio interview with George Millar of the Irish Rovers led to a Celtic art commission for an album cover, a great friendship. Jennifer now works with the band’s management team, and I am their in-house artist and photographer.”

He notes that his art covers the gamut between traditional and modern Celtic themes and modes.

“My most ambitious piece to date was ‘The Life of the Rover,’ a commission for The Irish Rovers’ 50th anniversary triple album cover. It was done in the style of the Book of Kells, but tells the story of the band over their five-decade career.”

Burgess also learned to play the bagpipes in Hawaii, and was a founding member of the Isle of Maui Pipe Band. One of the highpoints of his musical career was returning to Scotland to represent the Hawaiian Islands in the Millennium Pipe Band March through Edinburgh in the year 2000. Now retired from the band, he remains an active solo player at weddings and cultural events.

“I’m able to make a living doing something I am passionate about, be my own boss, and still live in a lovely place with warm water for surfing.”

In Maui he has a choice of two Irish pubs, one of which regularly plays Celtic music. He and Fahrni have put on an annual Robert Burns night at a local watering hole for the past 12 years also.

“There seems to be a healthy renaissance recently, with lots of young folks playing traditional music in all the Celtic lands, and creating modern Celtic fusion, as well. I see indigenous art heavily represented. Celtic art is the indigenous art form of the British Isles and Ireland and should be celebrated as such.”