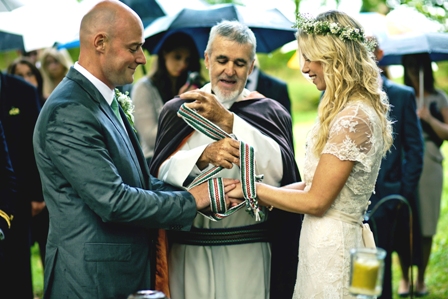 I’ve been a happily married woman for just over ten years. Nevertheless, five years ago, I asked my husband for a divorce.

Why did I do this you might ask? Having recently started a new job managing a small hotel in the Shetland Islands, I discovered that Pagan weddings – known as ‘handfastings’ – are legal in Scotland, without the need for a pesky civil ceremony first, and I wanted one!

The word itself has its roots in both the Norse and the Anglo Saxon languages, with the Norse term hand festa and the Anglo Saxon word handfaestung both meaning ‘to strike a bargain by joining hands’. This is likely the source of the modern term ‘let’s shake on it’. Later, it would come to be associated with the act of binding, or fasting, the hands of the bride and groom with a rope or ribbon, and is one possible origin of the term ‘tie the knot’.

Though the precise origins of handfastings as wedding ceremonies are uncertain, some sources suggest the custom has been around for thousands of years. The Celts that came to Britain from Europe certainly brought their custom of handfasting with them, often infused with their own Pagan religious traditions revolving around one or more goddess figures. Traditionally, the ceremony would take place during Beltane, a time when Celtic Pagans celebrated the fertility of the land and body. Couples would gather around a fire, where a Druid would perform the binding or ‘fasting’ of the hands, after which they were considered married.

The Picts and Vikings carried on this tradition, with handfastings often used to unite rival clans or forge alliances between two prominent clans where the son of a chief was handfasted to the daughter of another chief. In those times, the emphasis was on the contract formed between two parties more than the feelings of the respective bride and groom. Traditionally, these unions were temporary, with the couple staying together for a year and a day. If a child resulted from the union it became permanent. Like today, however, couples would often stay together or part as they chose, even if a child was born. There were even different types of handfastings depending on whether or not the man and woman were of the same or differing rank and status.

By the middle ages, the verb to handfast had come to mean “to formally promise or to make a contract” in the context of marriage. Thus, the word handfasting came to signify a betrothal or engagement, where a couple would join hands and declare their wish to marry in the future, usually done in front of witnesses.

Of note is that it took very little to form a legal marriage in Scotland at this time. A man and a woman simply had to exchange consents such as “I take you to be my husband” and they were married. Another was by exchanging consents in the future tense such as “I will take you to be my husband”. Once the couple engaged in sexual activity they were considered legally married, even though no formal ceremony had taken place, no priest had been present, and even perhaps no witnesses. Such marriages were known as ‘marriages by consent’ and were legal under both Scottish and English law.

While handfastings were only intended to imply a betrothal – what we today would consider an engagement – such a ceremony could actually form a legal marriage. This loophole even managed to trip-up members of the British royal family with the marriage of Edward IV and Elizabeth Woodville being declared invalid by her brother-in-law, Richard III, due to Edward apparently already being ‘married by consent’ to another lady.

Scotland has certainly been a bit of a rebel when it comes to what it does and doesn’t recognize as ‘marriage’. The church desperately tried to claw back control, and in 1563 even went so far as to declare that a marriage must be performed by a priest and have the consent of the church to be legally binding. Civil law stubbornly refused to bow to the will of the church, however, and continued to recognize handfastings or ‘marriage by consent’ right up until the 1939 Marriage Act abolished them all together.

It wasn’t until 2004 that the Pagan Federation in Scotland gained the right for their celebrants to perform handfastings as religious wedding ceremonies once again.

Today, especially in the former Celtic countries of Scotland and Ireland, neo-pagans and non-pagans alike have adopted the tradition of handfasting as an alternative to a traditional marriage ceremony, drawing on the practises of the ancient Celts. Some choose to marry for a year and a day, while others renew their vows over the course of several handfastings,  and still others ‘for as long as the love lasts’.

As for me, I never did get my Pagan wedding, but not because of any religious objections on the part of my husband, who – unlike me – isn’t a Pagan. He was just too tight to stump up the money to divorce me in order to marry me again! ~ Lyndsey Shir-McDermott-Pour