In Search of the Celts 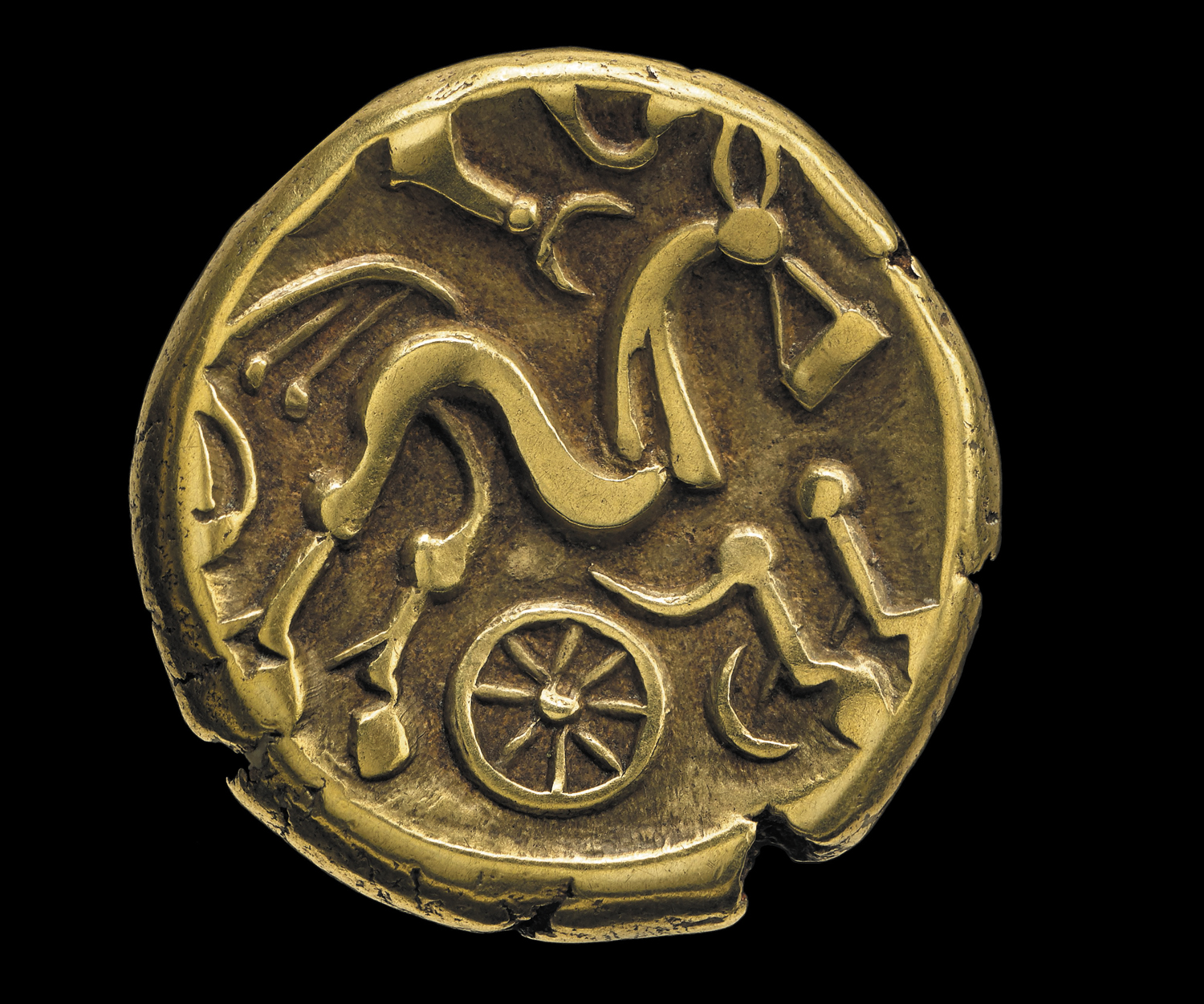 There’s no such thing as a Celt – that’s why we had to invent them.

If I say or write the phrase “Celtic art”, you know exactly what I mean. The word “Celt”, or “Celtic”, instantly conjures an image as recognizable as “Greek” or “Roman”. The twining tendrils found in the Book of Kells, the fabulously elaborate vellum Gospel made in County Meath in the 8th or 9th century; a patterned stone cross; the trinkets on sale at an Edinburgh gift shop, interlaced designs woven into tea towels, printed on to mugs, worked into affordable jewellery. And the St Patrick’s Day Parade in New York, a festival of Celtic identity, when even the city’s bagels are dyed green.

Yet the new exhibition at the British Museum – presented in association with National Museums Scotland – sets out to demonstrate that “Celt” is the Schrödinger’s cat of identities. It exists, because we can see it before our eyes; and yet, it does not exist, because in all likelihood the people we now call Celts never defined themselves that way. Those step-dancers and baton-twirlers who stride through the streets of New York and London every March 17 are attaching themselves to an identity retrospectively adopted in the past couple of hundred years.

The show sets out its stall immediately, questioning the visitor’s preconceived notions with a striking, life-size stone statue from Glauberg, in Germany, dating from 450BC. He is clad in armour and holds a shield, and his legs are powerful and well muscled. Around his neck is a torc, one of the distinctive neck ornaments often made of twisted metal wire – echoed in some of the treasures from the gorgeous hoard found just a few decades ago in ­Snettisham, Norfolk, also on display as you move through the exhibition. The powerful Glauberg statue was not carved from the imagination: he was discovered guarding a grave that held a warrior adorned in exactly the same way – his leaf-shaped headdress next to his body, his sword in its sheath.

This warrior would have been a Celt to the Greeks, who used the term interchangeably with “barbaroi” (barbarians) for people who were not themselves. Those people to the north, to the east and the west, those who were separate from classical culture – they were the Celts, although as the word is not Greek or Roman in origin, it may be an adaptation of an indigenous name. (To the Romans, “Celt” and “Gaul” were indistinguishable terms.) So, the artifacts in this exhibition have an extraordinarily wide provenance, as shown in a case of torcs with a map displayed behind them – the map stretches from the far west of the European continent to the east as far as Persia.

“Celtic culture”, in so far as it can be described that way, is a product of fusion, and the show traces a remarkable journey from the early Iron Age, into Britain’s Roman ­period, over to Scandinavia and into the 20th century. Throughout, those intricate patterns of leaves, animals and faces interlace themselves into many civilisations, connected by contact and trade if not by blood. And although the displays are div­ided by both period and theme – warfare, ritual, feasting – much of what is on display remains a compelling mystery.

Perhaps the greatest treasure in this exhibition is the stunning Gundestrup cauldron, on loan from the National Museum of Denmark. It was found at the end of the 19th century, but there is still doubt about exactly when it was made; and the stories it hides are compelling. Made from nine kilos of solid silver and more than half a meter in diameter, it is decorated on the outside with faces that stare out from the bowl; inside are elaborate scenes of what appear to be the stories of gods – but just what gods, and what they stand for, are completely unknown. Julia Farley, one of the curators, remarks that if you or I saw an image of a man and a whale in a religious context, that would be enough to indicate the story of Jonah; perhaps these images served a similar purpose.

The British Museum’s display includes a step so that visitors can see right into the cauldron; down at its base is a sword-wielding woman arched over a bull. Would that we knew her story! That said, some of the show’s tiny treasures – harness fastenings, the decorative handles on cups and flagons – reward close inspection, and repeatedly challenge the belief that non-representational, abstract art is a product our times.

The show weaves a circuitous route through the new Sainsbury Exhibitions ­Gallery, its square grey space softened by curving walls and shimmering fabric hung from the ceiling. Quite a few of the objects come from the British Museum’s own collections; displayed anew, they ­provoke consideration of the context in which they were made. The Sutton Hoo burial blends Celtic decorative motifs with enamel techniques introduced to Britain by the Romans; huge neck rings found in the north-east of Scotland are made from recycled Roman silver.

As the director of the museum, Neil MacGregor, noted when the exhibition was announced, “The word Celt was used to describe what people were not – not Roman, not Viking, not Mediterranean, not metropolitan or imperial,” he said. “The name Celt is a badge of otherness.” And so it has continued to be: the last section of the show investigates the Celtic revival that took place in Britain from the 18th century onwards and has continued to flourish, Celtic identity becoming a mark of distinctiveness for those small, fierce nations – Wales, Scotland, Ireland – bound up in the imperial project. Queen Victoria had a passion for “Celtic” brooches: some of her collection is displayed alongside the originals that inspired them (the 8th-century Tara Brooch, discovered in Ireland in 1850, was widely exhibited, copied and admired).

John Henry Foley’s 1859 sculpture of a ­heroic Caractacus, who led the British resistance to the Romans, seems a clever counterpoint to that ancient Glauberg warrior. The museum brings its display right up to date with a copy of Asterix in Korean – remember, the Romans didn’t differentiate between “Celts” and “Gauls” – and a Marvel comic featuring one of their lesser-known heroes: Cúchulainn, “The Irish Wolfhound”.

The title of the exhibition perhaps gives the idea that Celtic identity will be fully and clearly delineated behind these glass cases. It is not, because it can’t be: that is what makes it fascinating. “In using the word ‘Celt’ you are naming something real, but the use of the word is a coincidence,” Julia Farley says. Celt was a distinction imposed, not adopted; an idea with great ­resonance in a 21st century of mass migration and fluid ideas of being. (The catalogue is called In Search of the Celts – which resonates rather better with my experience of the show.)

Both catalogue and exhibition are another example of what the British Museum has accomplished under the leadership of MacGregor, who will step down in December after 13 years as director. A place that once seemed staid and self-satisfied in its display of cultural treasures from around the world has been transformed into an outward-looking, dynamic institution that is never afraid to question long-cherished ideas about the politics of identity. Story by Erica Wagner