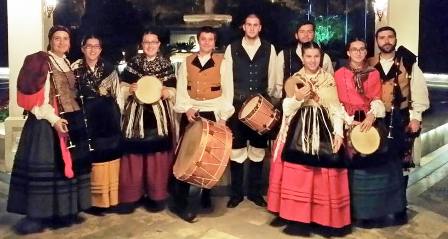 The past and the present become one when piper Inés Lobeira stands on the craggy rocks that ring the rugged shores of Galicia.

“I started to play the bagpipes at the age of eight with other children from my town,” shares Lobeira, who was born and bred in Bueu, a fishing village of 13,000 people in the northwest of Spain. “The bagpipes were the only instrument being taught there at the time, so it was our only opportunity to become involved in music.”

Lobeira comes from a family of music-lovers – traditional music, in particular – so the bagpipes had a great appeal. For more than two decades, she has played the gaita, a traditional Galician bagpipe.

“I still love Galician music a lot, and I also realize that bagpipes can promote my culture. At the same time, I can communicate with and learn from other bagpipe cultures.”

While it was the stirring sounds of the pipes that first attracted her, Lobeira’s appreciation of the region’s history has developed in step with her musical acuity.

“This area has a Celtic heritage that precedes the Roman Empire. The Kingdom of the Subei, one of the first in Europe to separate from the Roman Empire, was located here as well. Nowadays, Galicia retains a strong ethnic identity, with its own language, music and tradition. This identity is very distinctive, so Galicia is enormously different from other regions in the Iberian Peninsula, such as Andalucia, Catalonia and Portugal.”

While she honors the tradition of her music, Lobeira notes that she is not constrained by it.

“I am not strictly a traditional bagpiper; in my band – Retrouso de Cela – we don’t just play the old tunes in a traditional style – we mix our older repertoire with newly composed tunes. But we always strive to demonstrate the greatest respect to the structure and form of traditional Galician music.”

Lobeira, who joined Retrouso de Cela six years ago, adds that the band’s repertoire has recently hit upon a “magic balance” between bagpipe melodies and the percussion performance of the tambourines and drums.

She admits to a bit of envy over the institutional position the bagpipes hold in Celtic countries such Scotland and Ireland, but believes that Galicia is holding its own.

“I do think that Galician bagpipes and traditions still interest many young people. It is true our children have a large amount of activities to choose from, but bagpiping has continued to develop steadily in recent years.”

She acknowledges, however, that there are steps that need to be taken to preserve and promote Celtic culture.

“Modernizing the image of our bagpipes – so that young people want to get involved, and don’t simply see the instrument as an old-fashioned object – is essential. Also important is incorporating the bagpipes into more musical genres, so that audiences can appreciate them as deserving the same recognition and value as other instruments.”

Increased support from the Galician government, both in terms of financial support for pipe bands and other organizations involved with traditional Galician music and culture, would be advantageous also. Greater government-generated publicity and promotion of the music and culture within the region would be beneficial as well.

“Encouraging and promoting increased contact and exchange between Galician bagpipers and bagpipers from other countries and musical traditions would make a big difference too,” contends Lobeira.

Extra effort is required, she adds, because while the Galician piping tradition has steadily grown in importance in recent decades, other countries have a longer history of recognizing the bagpipe as a cultural emblem.

“We don’t think we can achieve the same level of penetration into Galician society at large that the Scottish pipes enjoy in Scotland, but there are definite steps toward improving our situation that can be taken.”

For Lobeira and Retrouso de Cela, the immediate challenge is to ready the band to participate in an upcoming international Celtic festival in France.

“Our goal is to work hard and do whatever is necessary to be in our very best form musically for that event. But overall, I just want to play as much as I can and always enjoy the music.”