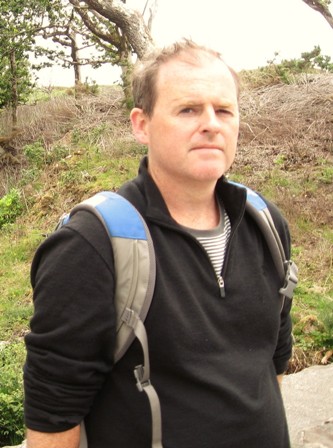 Innovative Irish writer Brian O’Sullivan is determined to shine the light of day on a wealth of Celtic culture languishing in academia’s darkest, dustiest halls.

A native of Cork, O’Sullivan is now based in New Zealand, which, as he points out, is as far from Ireland as a man can get. There, he is zealously writing, publishing, blogging and running a short story contest, all intended to beat back some popular Irish stereotypes and resurrect authentic culture with its mythological Fionn MacCumhaill and land goddesses.

“There’s a serious amount of ‘crap’ out there and when it comes to Celtic culture,” shares O’Sullivan via email. “The Internet is overloaded with ‘experts’ reproducing information from sources such as W.B. Yeats or Lady Gregory and quoting them as authorities on Irish folklore, which they most certainly were not.”

It was his own writing that brought O’Sullivan, albeit indirectly, to a wealth of manuscripts depicting ages-old Celtic experience. He was appointed writer in residence at Stout Centre, Victoria University, Wellington, following the publication of his short story collection, Leannan Sidhe – The Irish Muse. The appointment allowed him access to all university libraries, which he expected would advance his own non-fiction work on MacCumhaill.

The scale and complexity of cultural records stored in libraries and national archives around the world astounded him.

“These consisted of several thousand narratives collected from Ireland, Scotland and the Isle of Man, but a surprisingly large number still existed in ancient manuscript form. A number of them, written in Old and Middle Irish, still haven’t been fully translated.”

What particularly stunned O’Sullivan was that all the raw material available, and the century of subsequent analysis, was primarily restricted to academics – while most Irish, Scottish and Welsh people were unaware of its existence.

“In a sense, it seemed almost unfair that this stuff had never been made available in a form that could be accessed by the very people whose cultural birthright it was.”

He soon shelved his non-fiction book and changed direction to incorporate a wealth of cultural detail into a mystery/thriller titled Beara: Dark Legends, the first in a proposed trilogy.

“My partner and I were keen to retain creative independence so we set up our own publishing company and that is how Imbas Books was born.”

The tiny company’s objectives are to facilitate awareness of Celtic culture and heritage, transmit cultural knowledge in an entertaining fashion, and respect sources of knowledge while keeping content as culturally authentic as possible.

O’Sullivan is convinced most current tales of Irish mythology have been sanitized from the original.

“In Ireland, and in other colonized Celtic countries, from the 1600s native culture in any of its forms was suppressed, and slowly eroded by colonial governments keen to remove the threat of insurrection associated with the different way of thinking. Later, during the 1800s, when people finally started to reinvestigate Irish mythology and folklore, the only people who were educated enough to write about it were the descendents of the English themselves.”

The English, despite their best efforts, he suggests, often misinterpreted or interpreted tales differently. Then when the native population became literate and began to write their own stories, a new source of opposition was encountered.

“They were hit with a broadside from the Church who considered the ‘pagan’ beliefs and mythology of the original Celts blasphemous, and a potential competitor.”

According to O’Sullivan, many people would currently find it difficult to tell the difference between a story based on elements of Celtic culture or a Disney fairytale.

“There’s certainly been a resurgence of interest in Celtic-themed literature since the Sixties. Despite the fact that Celtic-heritage writers are pumping out large volumes of books, however, very few of those actually write native stories.”

With a second mystery/thriller coming out, and a new short story collection in the works, O’Sullivan is unable to turn out the volume of authentic stories he would like so he hit on the idea of  getting other people to submit short stories which will be enhanced with “cultural commentary/conceptual background added to each piece of fiction.”

“This Celtic Mythology Short Story Contest seems to align well with our approach for getting the information out in an entertaining manner.”