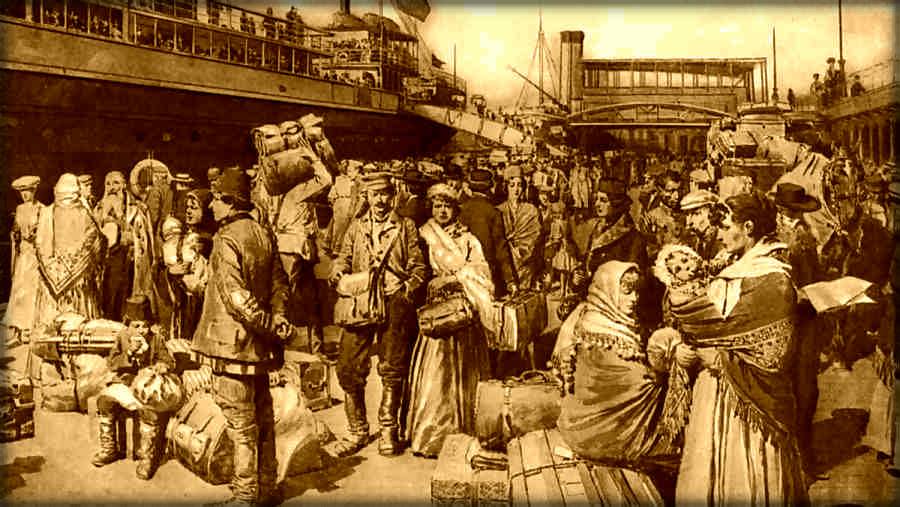 Today, the Irish are the 4th largest ethnic group in Canada with over four million Canadians having full or partial Irish descent … about 14% of the country’s total population.

During the Great Irish Famine of 1846 to 1852, when the potato crop fell to the blight, poorhouses were overwhelmed, soup kitchens couldn’t feed the hungry, hundreds of thousands died, orphans wandered motherless, and then cholera and typhus pulled the half-living into the fever pits … the mass graves. Emigration was the only hope. As many as two million Irish fled their homeland and another million are believed to have died trying. Hundreds of thousands went to Canada.

These Famine immigrants were the poorest of Ireland’s poor … barely able to pay the one or two pound passage and unable to buy enough food to sustain themselves on the voyage over. Some had their tickets paid by landlords eager to evict them and be free of the taxes they had to pay. Many Irish packed onto Canadian timber ships which otherwise would have made an empty and unprofitable return home to their Canadian port.

The Irish established communities in both urban and rural Quebec. Irish immigrants arrived in large numbers in Montreal during the 1840s and were hired as labourers to build the Victoria Bridge, living in a tent city at the foot of the bridge. Workers who were excavating land to build the bridge accidentally discovered a mass graveyard containing the remains of the 6,000 Irish ‘coffin ship’ victims. The Irish Commemorative Stone, or ‘Black Rock’, as it is commonly known, was erected by bridge workers to commemorate the tragedy.

Of the Famine Irish, many didn’t stay in Canada long. Once they had landed, many Irish crossed the border to America and headed to the nearest major city, usually Boston or New York. Those who did stay supplied a pool of cheap labour which helped fuel Canada’s economic expansion through the 1850’s and 1860’s. By 1867, the Irish were the second largest ethnic group in Canada (after the French), and comprised 24% of Canada’s population.

After the Famine the number of Irish immigrants to Canada decreased drastically. In the sixty years following the famine, 1851 and 1910, four million Irish left their homeland, compared with two million during the five-year Famine period.