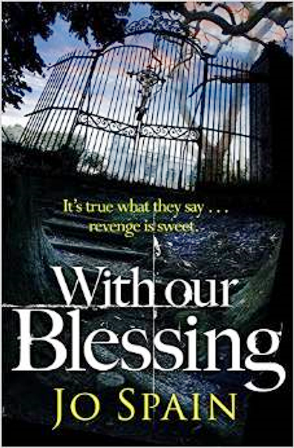 Irish author Jo Spain says she was inspired to write while growing up in the working-class suburbs of North Dublin in the 1980s.

“I read books as fast as I could lay my hands on them and spent most of my days scribbling little stories,” shares the scribe via email. “I escaped my surrounds with faraway lands and magical tales. Because I loved how good books made me feel, I wanted to do that for other people when I grew up.”

Spain, whose debut novel With Our Blessing spent months atop Ireland’s bestseller lists in 2015, says that she continues to write today for the same reasons.

“I had a really vivid imagination, like most kids, the difference being I’ve maintained that into adulthood. I don’t need a special desk or place to write, I’ve no talisman or routine; when I close my eyes I’m in a new place in my head, creating people, developing plots. I still love reading and watching movies and great TV series, visualized stories, but my favourite thing is to create my own. I never stop reminding myself how lucky I am to have that talent and to be living my dream.

“Sometimes I meet people who think all writers are tortured artists, driven by creative muses who wake them at 4 a.m. in the morning to compose hours of astonishingly impressive prose. I see this as a job – a wonderful, enjoyable, dream job, but a job. I’m very lucky – writing comes very naturally to me in that I’ve never encountered writer’s block or struggled to come up with ideas, so far.”

A “vivid thriller that explores the dark secrets of Ireland’s past,” With Our Blessing took 18 months from start to finish.

“I was doing it at nights and on weekends – on top of work and children. My husband is a former editor – a very nice investment on my part if I may say so – though the scalpel he wields when he’s going over my pages really tests our marriage sometimes. Between us, we’ve spilled blood, sweat and tears to make sure my books are good enough for readers.

“That was something I had to adjust to. I wrote a first draft and thought it was brilliant, then re-read it and realized it was rubbish. Not bin-it rubbish, but it needed a lot of work. There really is no room for ego in this game – not when you’re a debut, not when you’re established. You’ve got to be your own worst critic and that’s pretty challenging.”

The rewards, notes the novelist, are many.

“There have been so many little and big moments, from getting the book deal, the reviews, to the launch, hearing about the sales figures, getting in the top ten bestsellers…

“But I have one moment that stands out. Recently I offered to do short story competitions for a couple of local schools. I had lots of Saturdays up to my neck in all these kids’ stories, struggling to read spidery handwriting and find missing back pages, asking myself ‘what the hell am I doing?’ And yet, it was an absolutely heartwarming, hilarious, moving experience. I see it in my own children all the time, that force of imagination, their crazy little brains – and I was seeing this in hundreds of kids and loving it. Then when I went to the schools to award the prizes, all these kids gathered around me and were asking ‘are you the famous Jo Spain?’ The famous Jo Spain. After all the hard work of the last couple of years, everything I’ve learned about myself as a writer and a person, that felt like the most rewarding part – being able to give something to those kids and hopefully inspiring them to follow their dreams.”

Those responses have inspired Spain to keep following her muse.

“Book two will be launched later in the year, and I’ll start writing book three in the summer. I’ve a few more plots worked out for (protagonist) Inspector Reynolds and his team and want to develop them as characters, hopefully much-loved ones who’ll garner their own place in crime fiction lore…so, I’m keeping my ambitions achievable!

“In 2013-2014, I made the decision to give writing a try as a career option. I’m as shocked as anybody that that madcap plan has worked.”