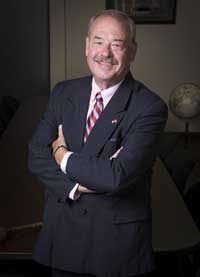 After a stellar career spanning several decades, John Cherry finds himself busier than ever.

“My election as Michigan’s Lt. Governor is the highlight of my 28 years in state elective office,” says John Cherry. “I had the opportunity to break bread with US Presidents, interact with US Senators, meet Ambassadors and participate in a number of national political conventions. I was also fortunate to serve as the President of the National Lt. Governors Association and as Chairman of the International Great Lakes Commission. More importantly, I was in a unique position to shape public policy, particularly in the areas of education and the environment.”

His passion for politics, he explains, is in his blood.

“Both of my grandfathers were very active politically,” shares the 64-year-old, “one in Michigan, the other in Texas. One of my great paternal grandfathers was an elected justice of the peace when peace was just a notion in Texas, and both my father and mother were local elected officials in Michigan. That tradition carries on with my wife serving as a Michigan State Representative, my sister serving as a Michigan County Treasurer, and my son serving as an elected municipal official in Michigan. My brother was an appointed police chief in one Michigan community. So my history of political activity and elected service comes naturally. Rumor has it that Celts have an affinity for American politics, and it appears that I am no exception to the rule.”

Like most North Americans, Cherry is a hybrid, mostly of Celtic strains.

“My father came from a Scottish, Welsh, and Ulster Scot lineage,” he explains. “Those ancestors migrated to North America during the 17th and 18th Centuries. My mother was half Irish and half Polish, and those migrations occurred in the 19th Century.

“One of my great grandfathers was a MacLachlan, and as I became interested in my personal heritage, I began researching our family genealogy, the history of ethnic communities from which we sprung, and the national stories of each of them.”

Since retiring from public office in 2011, Cherry has been active as president of Clan McLaughlin.

“My primary responsibility is to preside at our AGM. However, I also work with other Clan members to produce a bi-annual newsletter, convene Clan tents at highland games throughout the eastern half of the United States, and launch periodic initiatives to promote Scottish culture among the MacLachlan family. I also represent our association on the International Clan governing board.”

The challenges, he notes, are many.

“Clans today no longer have a monopoly on access to cultural news or history. Competition allows potential members to search elsewhere for the knowledge of personal identity that they yearn for. That is both healthy and challenging for modern day clans. We have to work harder to be relevant and what we discover as we do that can be exciting, but we seldom have the resources to make it an easy task. Younger generations expect more than the Highland games experience that provided the life blood of clan organizations a half century ago. Clan leadership today must rethink how it markets its appeal.”

The rewards, however, are more than equal in measure.

“I have made friends of people who share my heritage both in terms of Scotland or what our ancestors encountered when they made North America their home. I have learned about North American history, and the history of Scotland. It has brought a whole, new dimension to my understanding and appreciation of Appalachian art – particularly music. I have visited parts of North America I probably would have never ventured to. More importantly, it allowed me to fulfill what much of the Diaspora yearns for – a visit to Scotland, which makes one realize how many more times you wish to return. And I know the same can be said of Ireland and Wales.”

Along with his Clan duties, Cherry is active with a number of other regional and national Celtic organizations

“I serve as the Chair of the St. Andrew’s Society of Detroit’s Board of Trustees (SASD), and I am on the Executive Board of the Council of Scottish Clans and Associations (COSCA). At SASD, we actively promote the Scottish North American identity in Michigan and we raise a significant number of dollars for Scottish Arts scholarships and general charitable giving in southeast Michigan. At COSCA, we have a similar charge nationwide. However, we are also focusing on assisting Clans in their efforts to meet the new challenges of the modern world, and we actively encourage efforts to enhance people to people connections between North Americans of Scottish heritage and the citizens of Scotland. As part of that mission, we at COSCA foster our ongoing relationship with The Standing Council of Scottish Chiefs and its respective members.”

The work of bringing that heritage to future generations, he says, is vital.

“Young Scottish North Americans will embrace and become fascinated by the culture and history of their ancestors if encouraged and offered a helping hand. And if that helping hand is attached to another young person in Scotland, I think the resulting bonds become both durable and dynamic. For those of us active in Scottish heritage organizations, we have to refocus our attention from creating experiences that we enjoy to creating experiences that we can share with our younger partners.”