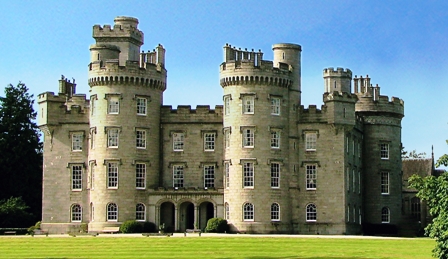 He has been described as one of the most hated men in Scottish history, a brutal landowner who forcibly evicted up to 3,000 tenants to Canada, some handcuffed and thrown on boats at Lochboisdale “like cattle.” Colonel John Gordon of Cluny, of Cluny Castle, Aberdeenshire, embarked on removing people from their Hebridean homes in 1851 after he saw poor returns on his estate in the Western Isles, which included land on Benbecula, South Uist and Barra.

Described as a hard-headed businessman and a miser so tight he moaned he couldn’t afford to get out of bed, Colonel John Gordon bought the islands from the 18th chief of Clanranald, Reginald George Macdonald, in 1838. The clan chief, an Eton and Cambridge-educated man who had been banned by his family’s trust from visiting his Scottish property, was forced to sell due to mounting personal debt. The deal with Gordon signaled the beginning of an even darker, dismal chapter in the livelihood of the tenants on the new Long Island Estate.

Within nine years, the deteriorating condition of the islanders was described “as a scene of wretchedness” by Reverend Norman Macleod as land for farming was reduced for sheep grazing. “Despicable, nay heart rending,” is how the minister described the scene entering the Cluny estate.

“On the beach the whole population of the country seems to be met, gathering the precious cockles…I never witnessed such countenances, starvation on many faces,” the account, contained in The Jaws of Sheep: 1851 Hebridean Clearances of Gordon of Cluny, said. Four years later, Gordon, who also owned six plantations in the West Indies and was described as the ‘richest commoner” in Scotland, began forced evictions on all his islands. A compulsory public meeting in Lochboisdale, South Uist, was held on August 11 1851, after which tenants were forced on board waiting emigration vessels.

One account of the meeting summed up the chaos, violence and fear of the night: “One stout Highlander, named Angus Johnstone, resisted with such pith that they had to handcuff him before he could be mastered, but in consequence of the priests’ interference his manacles were taken off and (he was) marched between four officers on board the emigrant vessel.” On Barra, attempts were also made to handcuff the evictees. Some managed to run to the hills where they were hunted down by dogs. A number of families were separated. The evictions were described as “loathsome work” by eyewitness Catherine Macphee, of Iochdar, South Uist. According to The Jaws of Sheep, she said: “I have seen big strong men, champions of the countryside, the stalwarts of the world, being bound on Loch Boisdale quay and cast into the ship as would be done to a batch of horses or cattle, the bailiff and the ground officers and the policemen gathered behind them in pursuit.” On arrival, Gordon’s former tenants claimed that promises of work – and even land, in some cases – were non-existent.

A newspaper cutting from the Dundas Warder, printed in Hamilton, Ontario, October 2 1851, illustrates concern over the condition of the new Highland arrivals. “We have been pained beyond measure for some time past, to witness on our streets so many unfortunate Highland emigrants, apparently destitute of any means of subsistence and many of them sick for other attendant cause.” Gordon, who also served as a Tory MP for Weymouth and Melcombe, Regis died in 1858 his estate ultimately passing to the wife of his late son, John Gordon of Cluny. Lady Emily Gordon Cathcart. who visited the estate once in 54 years, continued to “encourage” tenants to leave for Canada and stopped releasing land for farming. Some believe her support for emigration was to clear Catholic tenants from her property. Others say it was to boost the value of her stock in Hudson’s Bay Company and the Canadian Pacific Railway. After her death in 1932, the Estate was managed by her trustees before being sold in 1944 to the London banker, Herman Anton Andreae, before it was taken over by a syndicate of sporting enthusiasts in 1960 with the South Uist Estates Ltd created. In 2006, a community buy-out acquired the entire share capital of the company with Storas Uibis formed by residents. It now manages 93,000 acres of land with a population of 3,000, including 850 tenant crofters.

Part of its income is derived from renewable energy production. It is considered a success story of Scotland’s land reform agenda driven to rebuild rural and island life darkened by people such as John Gordon of Cluny. As Stewart notes: “The people of the Hebrides will never forget John Gordon of Cluny for his cruelties.”