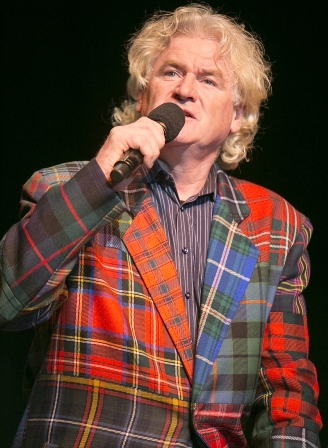 On his latest tour, Scottish-Canadian singer John McDermott digs deep into his 25-album repertoire, seamlessly blending timeless classics with a selection from his most recent recording, Raised on Songs and Stories. The new CD is a toast to his Scottish heritage, and includes traditional takes on Leezie Lindsay, Ae Fond Kiss and the Loch Tay Boat Song. A couple of tunes, including Dublin in the Rare Ould Times, are a nod to his Irish ancestry.

“For quite a few years (musician and arranger) Eric Robertson and I toyed with the idea of recording an album with no breaks, no silence between the tracks – just one single continuous flow of music from start to finish and that’s what we have on the new album,” explains the 60-year-old.

McDermott’s shows have been a mainstay on the Celtic calendar for decades. As always, the concerts begin without intro; just him settling into something like Flow Gently Sweet Afton, before taking charge with the more dramatic Bonnie Mary of Argyle. There is the occasional brief story or gentle joke, but mostly McDermott comes to croon.

His schedule rarely lets up; a fall tour across Atlantic Canada and Ontario was followed by a short break to spend Christmas with his wife and their two dogs on Georgian Bay. The Glasgow-born vocalist will soon be back at it, however, heading south to Florida, Texas, Arizona and Nevada to perform for audiences peppered with Canadian snowbirds.

“I’ve been making my living singing for 22 years now, and some mornings I still wake up and pinch myself. Imagine, getting paid to sing, night after night.”

Before a show, McDermott likes to drift around the performance center lobby, shaking hands, hugging and back-slapping familiar faces. By show’s end, he makes a point of thanking the audience for keeping him and his three band members working.

“I am truly grateful for all of the support,” he notes. “It is important for me to make each performance as personal as possible.”

In appreciation, he has lent his voice to the aid of war veterans – a promise he made to his father, Peter, who died soon after McDermott began singing professionally.

“He came to see me in a show just after Remembrance Day. He told me, quite seriously, there was a chance I might be pretty good at this, and he made me swear that if I did well, I’d do something for veterans and give back to Canada.”

McDermott began his philanthropic efforts with fundraising Christmas concerts for the veteran’s unit of Sunnybrook Health Sciences Centre in Toronto. More recently, he has created the McDermott House Canada Foundation, and is $2.5 million into a $3 million pledge to renovate and enhance the palliative care unit at a veteran’s center.

An ambassador with Canada’s Vimy Ridge 2017 commemoration project, he grew up with an appreciation of veterans; his father served as a tail-gunner with the Royal Air Force, his uncle died in a prisoner of war camp, and he had cousins who died during, or as result of, the Vietnam War.

The ninth child in a family of 12, McDermott was 10-years-old when his family immigrated to Toronto, where his father – also a fine tenor – worked as a glazier. There was a singing tradition within the family, but McDermott never imagined a career in music. At his parents’ 50th wedding anniversary, he presented them with a recording of 13 songs – one for each of their children – and a revamped version of his signature song, Danny Boy.

The singer’s career took off when his original recording of the tune found support from popular CBC Radio host Peter Gzowski.

“It was all like dominos after that. When I was asked if I could go on tour, I requested a leave of absence from work because I didn’t have high expectations. When I was told that I would be touring with The Chieftains, I was more shocked than anybody.

“There was a sort of revival in appreciation for Celtic music back then, with the Rankins, the Barra MacNeils and others. Singing ballads, as I was doing, was something different, but it fit in. It was at a concert in Halifax that I made the decision to see where the music could take me, and I am still on the journey.”