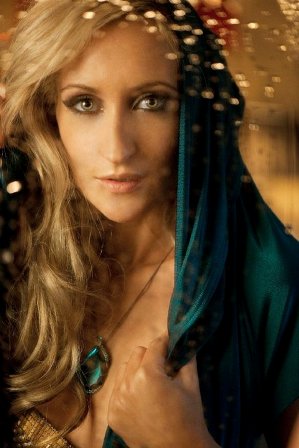 Though vocalist Kate Dowman was born and raised on the tiny Isle of Man, it never stopped her from dreaming big; her youthful aspirations have led to performances all around the world, including a private recital for Madonna and friends.

Now she is returning to her roots, recording a Manx Gaelic album.

“It is incredibly exciting as I will be going back to the Isle of Man shortly to do some more research and finalize everything,” the 30-something songstress tells Celtic Life International from her current home in London. “The songs of the Isle of Man are so beautiful and rarely heard now.”

Dowman describes her own heritage as mixed; her mother’s family was Manx and Irish, while her father’s was English and French.

“My father, a doctor on the Isle of Man, was a great linguist. He spoke Russian, French, Italian, German, Arabic and Spanish. Perhaps there is a link there, as he had a wonderful ear and often took me to classical music concerts as a youngster.”

Along with vocals, she learned to play flute, piano and harp. Singing, however, was her first and foremost passion.

“I started performing at a very early age on the Isle of Man, at school, at church, and in the local Eisteddfods – or Young Singer of Mann – music competitions. I have a recording of me singing one of the Manx Gaelic songs when I was about eight years old.”

She believes that she was born with a natural love of music.

“It is part of my soul; not only the traditional folksongs that started my journey, but also sacred music such as Oratorio and Handel.”

After leaving school she studied music at university in the United Kingdom, before completing her opera training in Sydney, Australia.

Despite the formal education, Dowman always felt the pull of her Celtic roots.

“I had a wonderful Celtic harp teacher who was very involved in the Manx Heritage Society and was a great musical inspiration. I always thought the Celtic harp was like listening to angels.

Performing, she insists, is when she is most focused and most honest.

“I find it a huge honour to be able to deliver beautiful music to my audiences,” she shares, “whether it is a big Mozart opera, an early music concert work, an intimate evening of Celtic songs, or a mixture of all at a fabulous gala ball where guests sip champagne.”

Dowman explains that she has “two voices”: one is her trained operatic voice that must project to the back of a concert hall or opera house.

“The other is the more natural voice I use when I sing Celtic songs; softer and gentler, less vibrato, more breathe. Maybe if Enya and Sarah Brightman merged you might find someone a bit like me.”

She credits well-known English composer Vaughan Williams with assembling and arranging many Celtic folksongs that might otherwise not have been written down. His collections have allowed artists to bring new life to the traditional songs.

“There seems to have been a real revival of Celtic music in the past few years which is wonderful.”

A career musician, she suggests, is forever learning and evolving, practicing discipline and perseverance, all the while accepting the occasional rejection and discovering new direction. For Dowman, a constant inspiration is the wealth of music at her disposal.

“There is the magical 12th century plainchant to church music to opera and of course, Celtic folksongs. I think what I love about these is the freedom of interpretation. Unlike opera, they have been passed down traditionally by mouth rather than being written.

“There essentially isn’t a right or a wrong way to sing them, so I have greater freedom than with having every aspect of notation being set by the composer and then highly directed by the conductor.”

It was during a period of illness and a life-threatening operation that Dowman began writing her own songs.

“They sit somewhere between folk and classical and are still very much evolving.”

She continues to listen to a wide-range of music for inspiration.

“My iPod goes from Puccini to Bob Dylan, from Enya to Gluck, from Edith Piaf to Debussy via The Carpenters and Vaughan Williams. Maria Callas is probably the greatest vocal actress I have ever heard, and Nana Mouskouri sang folksongs very beautifully.”

In addition to Madonna’s private recital – which was attended by Gwyneth Paltrow, Chris Martin, Stella McCartney and Tracy Emin – Dowman cites singing in the Sydney Opera House and at a charity concert in Tiananmen Square as career highlights.

“This is not a vocation that has very much routine,” she smiles. “Some months I will have a lot of operatic work, while others will see a lot of corporate work, auditions, practicing, time to write my own songs, and – of course – look after my lovely husband! It is a bit like juggling, but I wouldn’t change it for the world.”