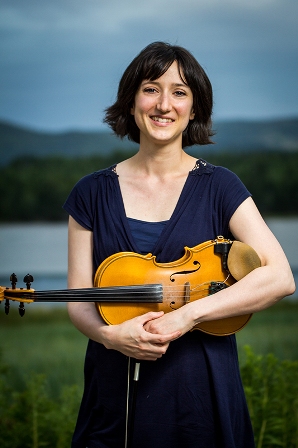 Canadian fiddler Kimberley Fraser returns to the landscape that inspired the vibrant Celtic music she carried to audiences in the United States and Europe for a decade.

Fraser, who is renovating a home in Cape Breton, Nova Scotia, cannot remember a time when the jigs, reels and strathspeys were not calling out to her. At the age of two, she sabotaged her older sister’s dance recital by dashing onto the stage to dance along.

“It worked for me,” she recalls with a laugh, “because I got a step dance solo of my own the following year.”

Her dance teacher was Jean MacNeil, matriarch of Nova Scotia’s famed musical family the Barra MacNeils, so Fraser grew up with a front-row seat to the popular Celtic band.

“I always heard the Barras, always pretended to be Lucy (MacNeil) and I listened to great players like Carl MacKenzie and pianist Doug MacPhee at concerts. When I was about five years old, I saw fiddler Ashley MacIsaac on the television show ‘Up Home Tonight’ and fell in love with him, partly because he was left-handed like me. My parents taped the episode and I watched it over and over again and pretended to dance and play along with him.”

Desperate for a fiddle, she began lessons at age six.

“I can’t say I ever found it difficult. I was very attracted to the music, I was surrounded by it and I was determined to be able to play it. I love the simple melodies and the gutsy, dirty tunes.”

By the time Fraser was in her twenties, renowned Cape Breton fiddler Dan MacDonald was struck by her versatility, suggesting she was “equally at home at a house party, playing for a square dance or on the stage at a concert in Bras d’Or or Boston, Scottsville or Scotland.”

At St. Francis Xavier University in Antigonish, on Nova Scotia’s northern shore, she combined a degree in Celtic Studies and music before jumping wholeheartedly into the music business.

“I considered it as taking a few years off to see what I could do with the music. It was a great education and I was fortunate to get into a lot of festivals.”

Her first introduction to old-time American and bluegrass music was at the American Festival of Fiddle Tunes in Port Townsend, Washington, where she was surprised by the improvisation of the musicians.

“As Cape Breton fiddlers, we don’t generally improvise on the melody of a fiddle tune. We play it through twice and move on. Any improvisation comes from the piano player. But with bluegrass and old-time, there is constant improvisation.”

The immersion into other styles, including American old-time, Texas swing, bluegrass, jazz and Irish fiddling, broadened her musical horizons.

“I’ll always be a Cape Breton fiddler but exposure to other genres has given me so many tools to work with in arranging melody and harmony.”

Fraser also noted many of the musicians she admired had studied at Berklee College of Music in Boston, so she enrolled.

“I’ve had the opportunity to perform at major festivals like the Tonder Festival in Denmark, Celtic Connections in Glasgow, and the Milwaukee Irish Festival, and to teach at some great camps like Swannanoa Gathering in North Carolina and the festival of fiddle tunes in Fort Townsend.”

Performing for NATO soldiers in Afghanistan in 2008 was a career highlight.

“Being there, performing for the troops, it was an experience beyond words.”

When a repetitive strain injury forced her to cut back on touring, Fraser left Boston to return to her hometown of Sydney Mines, Cape Breton, where she now juggles teaching and performing.

Currently, she is one of the co-coordinators of a youth mentorship program there that seeks to introduce the Gaelic culture to another generation of musicians.

“There is tremendous musical potential among our youth, and among my own students, but the issues are different today. Young people are not surrounded by the music at parish concerts and family dances, as I was. They are also often torn between sports and dance and other pursuits that demand a good deal of time.”

While this passing down music customs has its challenges, there is little doubt Fraser will persevere. Her ancestry is a blend of stubborn Scots and French settlers who had a striking ability to improvise.

“Fougere is actually my family name – my grandfather’s people were Fougeres from rural Richmond County in Cape Breton. When his people moved to the industrial Sydney area, it was apparently easier to find work with an anglicized name so it was changed to Fraser.”