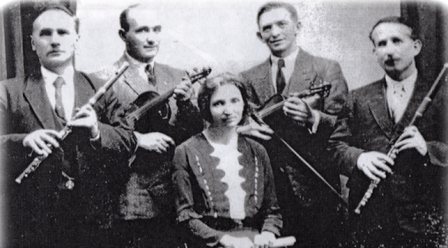 This story was inspired by two reports: one entitled ‘AN UNFORTUNATE’ and the other ‘ARDGLASS MUSICAL SOCIETY’. I found the character, Lizzie Murray, the ‘unfortunate’, intriguing so I created the story behind her arrest. The Ardglass Musical Society provided a contrasting backdrop for a snapshot of her life.  The articles appeared in ‘The Down Recorder’ 08.01.1887.

Lizzie Murray took another long drink. The liquid lit a faint glow through her body, numbed from the frozen night. She pressed herself further into the alcove in the stone wall of the schoolhouse. Flickering lamp light from the window above was reflected on the snow. She imagined the warmth inside, bound by the buzz of comfortable voices. Lizzie could not quite reach the sill to peep into the hall, but she pictured it, feeling the anticipation of the audience inside. The chattering hushed; the first recital was about to begin.

Wasn’t that sweet Jeanie McAllister? She’d know that wee voice blindfolded: ‘Hark the distant hills’. Lizzie closed her eyes, drifting to undulating meadows of green grass and clover, the soft fuzz of a quart of whiskey sharpening the colours whilst blurring the edges of the cold.  The corpse of a hymn rose from the grave of her consciousness, like it always did after a quarter bottle was empty. As the applause from inside roused Miss McAllister to encore, Lizzie let the empty bottle drop to the ground with a velvety thud. Searching her coat pocket she grasped the last one. The kiss of the cork released a waft of pleasure and Lizzie’s heart was fit to burst. ‘The Lord is my Shepherd’ stirred at the back of her throat, and she opened her mouth to sing, to sing from the very corners of her soul.

‘Lizzie Murray, how about darkening the door of a church and keeping yer caterwauling for then.’ She knew Constable McClure’s bellow. She pictured his fat, red face at the window above her as he banged the glass. No doubt, the lovely Mrs Constable John McClure would be waiting in the wings with a warbled piece of girlish nonsense.

‘Alright Constable, keep your helmet on.’  Her song retreated into the shadows of some distant valley in her heart.

Holy God, it was Mr Breen the postmaster reciting Tennyson. Her ear followed as his voice dropped at the end of every verse. The final words were inaudible outside in the snow. Lizzie filled in the blanks of those muffled lines with the words she’d learnt in that very schoolhouse.

She pulled her huge woolen coat in close. Snowflakes sat in her hair and settled on her shoulders. Taking her hands from the warmth of the deep pockets, she closed her eyes and raised the bottle to her mouth once more. Her lips stung for a moment, the whiskey bringing a jolt of life to this living death.

The tinny schoolhouse piano wasn’t doing Reverend Lodge’s pianoforte solo any favours. That Nocturne sounded more like it was being played by a Dublin organ-grinder than a gifted musician like the Reverend. Lizzie chuckled at the thought of his sweaty great fingers sliding up the keys towards that final note, now left drifting in the night air.

A hum of chatter rose: the curtain had fallen on the first act. It had been many years since Lizzie had enjoyed the company of others. When she pictured the polite interval encounters, her senses hungered for the smell of soap from a freshly scrubbed neck, the sharp scent of hair tonic, or that slight change in temperature that builds when a warm body leans in closer to be heard, or to hear.

Her fingers were drawn to the bottle again. She watched the snow dance in soft swirls around her, drinking long and deep till all discomfort had numbed and softened. The cooing voices lulled her towards that valley again, but this time she lay down in the soft green grass; the cold had left her. Lizzie’s eyes drooped.

She awoke with a jolt. A sharp pain shot up her side.

‘Get up or you’ll miss the National Anthem.’ Lizzie peered out from the folds of her enormous coat. A pair of uniformed legs stood before her, but not those of the sturdy constable. These belonged to a soldier. As one leg moved in to kick her once again, the opening chords of the National Anthem rang out. The sound of standing feet muffled her yelp.

‘I said, get up, you filthy old hag.’ He ripped the quarter bottle from her grasp. The last of her precious amber nectar disappeared down the throat of this adolescent Private. Fury rose in her throat: a fury stoked by all the injustices of the occupation and the tragedy of her miserable life.

‘You’ll pay for that you trumped up wee hallion!’ she said, standing to the upper limits of her five feet and two, taking one step towards him.

‘Is that the best you can do, old lady?’ he laughed throwing the bottle across the yard. With an arrogant swagger he moved in, tapping her shoulder, just enough to put a body with nearly three quarter bottles of whiskey and, if Lizzie had remembered, two glasses of sherry, off balance.

Lizzie held the schoolhouse wall, steadying herself, and brushed her shoulder of the imaginary stain, ‘You get your dirty English hands off me, or I’ll have ye strung up from the nearest tree… you, you thief.’ At this he laughed most heartily.

‘Go poison yourself with another,’ he said throwing a handful of coins at her feet, ‘no one’ll miss ya.’

Lizzie knew only too well her true value in her hometown, but anger brought some precious scraps of dignity to the foreground, adding at least another inch to her full height.

By the time Constable McClure and Reverend Lodge appeared to attend to the commotion outside the schoolhouse, Lizzie had gone. A young private lay curled in a ball on the snow, vocalising his considerable pain. Thankfully there were no saints within the grounds of the school house, or they would indeed have blushed. Then, both reverend and constable strained their ears to another, more familiar sound. Through the icy flakes of white from somewhere along Market Street, the clear, sonorant voice of Lizzie Murray, guided by the hand of righteousness, worked its way through the verses of her favourite hymn. Her cup overflowed. ~ Story by Mairi McCurdy

Mairi McCurdy is a member of a woman’s writing group in County Down, Northern Ireland. The group is profiled in the February 2016 edition of Celtic Life International Magazine.