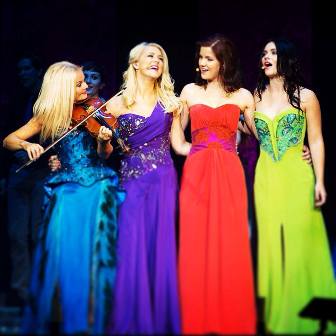 “It’s cold here today,” shivers Máiréad Nesbitt over the phone from Mannheim, Germany, where she and her Celtic Woman cohorts – Máiréad Carlin, Susan McFadden and Éabha McMahon – are preparing for another performance.

The Irish supergroup is in the middle of a European tour, the first leg of a global jaunt that will see the band crisscross North America over the coming months in support of their latest recording Destiny.

“I don’t mind the weather, actually,” continues the energetic 36-year-old violinist. “I have homes in Ireland and on the east coast of the US, so I’m quite used to it by now. And, to be truthful, I’m really not much of a sun person. I don’t think too many Irish people are.”

While the weather might not be a factor on the road, touring for months on end does present its fair share of challenges for most musicians.

“Well for one thing, living out of a suitcase is never fun,” shares Nesbitt. “Staying in different hotels, it’s easy to miss the creature comforts of home. And it is not like we have a whole lot of time to do other things while we are on tour, like sightseeing or visiting museums or whatnot; most of our days are filled with working commitments – media interviews, appearances, sound-checks, rehearsals, running over the show, etc. It can be quite exhausting, to be honest, though we do usually get one day off each week simply to rest and recoup.”

Though she has spent years on trains, plans and in automobiles, Nesbitt does admit that she occasionally get homesick.

“I miss my family, absolutely. My Mom and Dad are still in Tipperary, and my sister and brothers are spread out across Ireland. I do speak with them regularly, and they did come over to see the final show of the last tour in London, but it is not the same as sitting around the kitchen sipping a warm cup of tea, catching up on the neighbours.”

Born and raised in Loughmore, Co. Tipperary, Nesbitt was surrounded by music and melodies for as far back as she can remember. Her grandmother plunked away at the organ, both of her parents were music teachers, and each of her five siblings studied music as well. Nesbitt began playing piano at the age of four, before switching over to violin two years later.

Years of formal study at the Ursuline Convent in Thurles in County Tipperary, the Waterford Institute of Technology, the Cork School of Music, and the Royal Academy of Music and Trinity College of Music in London, paved the way for her profession.

After stints in the National Youth Orchestra of Ireland, and the country’s RTE Concert Orchestra, Nesbitt launched a solo career, working with the likes of Van Morrison, Clannad, Afro Celt Sound System, The Celtic Tenors and Coolfin.

Her big break came in 1996 when she was invited to join Michael Flatley’s critically-acclaimed spectacle Lord of the Dance as the lead fiddle player. Subsequent gigs with Flatley’s Feet of Flames and Riverdance only further cemented her status as Eire’s premier 4-string-slinger.

In 2001, she released her first solo recording, Raining Up, showcasing her passion and talent to combine both classic and contemporary styles. Members of her family appeared on the album, though they did not tour with her in support of the 14-song soundtrack.

“It has been a fantastic experience,” she says, “and beyond my wildest dreams in so many ways; creatively, the touring and travelling, and all of the great work we have done in the studio.”

Over the last twelve years, her collaborations with her Celtic Woman compatriots have resulted in almost twenty audio and video releases, including the band’s latest effort – their tenth studio recording – Destiny.

Though just released internationally this past January, Destiny has already skyrocketed to the top of the charts around the world.

“I’m not going to deny it, “smiles Nesbitt, “it’s a great feeling knowing our work is striking a chord with audiences. A lot of love, time and energy go into both recording and touring, and there is no better reward that performing for appreciative audiences.

“Getting the ear of critics and receiving good reviews does matter, yes,” she continues, “but there is nothing more fulfilling than getting feedback from our fans or from those who are hearing or seeing us for the first time.”

Along with audience “meet ‘n’ greets” and other in-person appearances, social media has proven a positive pipeline for the band.

“Watching Twitter and Facebook blow-up after a show is really quite something,” laughs Nesbitt. “It’s amazing to see this huge Celtic Woman community interacting amongst themselves, sharing their thoughts and feelings on what they have just collectively experienced.”

Response to the Destiny performances has been excellent so far.

“It is a very diverse and dynamic show; musically, the band has never been better or sounded tighter; the stage, sound, lighting suit the songs perfectly, as does the choreography. And our stylist has really outdone himself with the gowns and dresses this time around. The show has been quite carefully crafted so that our audiences may enjoy a complete audio and visual experience.”

Though tightly wound, the concerts do feature moments of sheer spontaneity.

“We each have our solo moments during the show,” notes Nesbitt, “and there is some freedom for improvisation there. I like that, as it allows me to stretch out as a player each night as the song speaks to me and tells me what to play. As an artist, it is vital to challenge oneself and grow by trying new and fresh things on a regular basis.”

Keeping that creative edge is especially important on lengthy tours, including this one, which will see the band take the stage in the USA from May to July.

“It is very possible that more dates will be added as we go along, including in Australia and Canada.

“I really love visiting Canada in particular. Everyone is so warm and welcoming, and there is such a great fiddling tradition there, especially on the east coast with players like (Donnell) Leahy, Natalie MacMaster and Ashley MacIsaac. It is very inspiring, and it almost feels like being at home.”

And while it is a long, long way to Tipperary, Nesbitt is more than happy to be in Mannheim at the moment.

“This is the life I chose, and in the end I would not trade it for anything else in the world. Home is where the heart is, right? And right now my heart is in this place and with these people.”