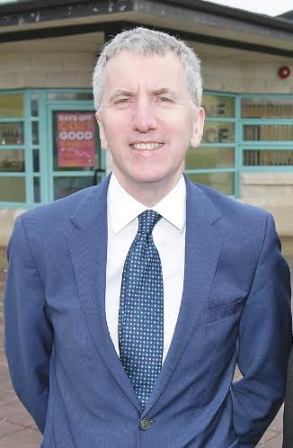 Past, present and future are woven together in a personal Celtic knot for Belfast’s Máirtín Ó Muilleoir.

A publisher, politician and tireless promoter, Ó Muilleoir is determined to “change the narrative” of his city.

In the 1980s, he was a flak jacket-wearing Sinn Féin councilor, barred from the Lord Mayor’s parlour, yet he went on to become Lord Mayor of Belfast in 2014. He followed that up by becoming a Sinn Féin member of the Northern Ireland Assembly. He also stood, unsuccessfully, as the Sinn Féin candidate in the 2015 United Kingdom general election. If that setback slowed him down, there is no evidence on his Twitter feed where he is constantly sharing information of economic development, tourism and social reform.

An Irish speaker, he credits the Irish language movement in the late 1970s, and later “the life-changing hunger strikes of 1981,” with awakening him to his heritage and sparking his activism.

“If you don’t change over 40 years of activism there is something wrong with you,” he shares about his evolution. “But while I don’t have the same reckless exuberance I had as a teenager, I am more convinced than ever of the need for all Irish people of all religions to be sovereign and independent. Equally, I believe in a vision of a fairer and more equal world where social justice is paramount.”

Whether in business or politics, Ó Muilleoir is driven by a vision of a new Belfast, transformed from “a city of division and warfare to a city of unity and peace.” He speaks constantly of “editing out the negativity.”

As chairman of Belfast Media Group, he publishes four weekly newspapers, including New York’s Irish Echo. “It is a commercial business which has been at the heart of the community it serves since 1972, when it was set up to provide a voice for the voiceless.”

He is equally comfortable posting selfies and comments on Twitter, writing heartfelt or analytical blogs, posting Facebook updates and presenting his views in e-zines.“Social media is priceless,” he notes. “We get to give our unfiltered view of the world and our audiences can add that view to the mix and make their own mind up.”

Ó Muilleoir’s own mélange of heritage informs his vision of international connectivity. “I have always presumed the Millar side of my family was Scottish and my mother was a McKeown, so I’m a mongrel. I had a great-grandfather who died in a British uniform during the Great War, and on the McKeown side a grandfather fought with the IRA and was a victim of a sectarian shooting.”

He believes that the soul of a people lies in its languages and culture. “I look forward to the day when pro-British unionists in the North of Ireland will end their veto over an Irish language Act and accord to citizens here the same rights enjoyed by the Welsh and Scots, as well as our sisters and brothers across the border in the South of Ireland.”

Ó Muilleoir delights in hearing Irish spoken, whether on radio and television or person to person, and constantly encourages its practice.

He points to tourism statistics to back up his contention that Northern Ireland is on the move, and he supports Belfast’s political tourism economy. “I prefer to call it cultural tourism. I think it is authentic, has integrity, and is fun and exciting. Heritage, history, ‘Troubles’ is a key part of that mix.”

Growing the population will be the key to Belfast’s future, he contends. “We need to ramp up the growth by drawing talented people from every corner of the globe and making Belfast a cool place for visitors, newcomers, immigrants, business travelers and tourists, as well as for those who have always called Belfast their home.”

During his year as Lord Mayor of Belfast, Ó Muilleoir urged the global Irish Diaspora to connect, engage and invest in his city.

A married father of four, he was also recently named a Paul Harris Fellow by Rotary International for “the furtherance of better understanding and friendly relations among peoples.”