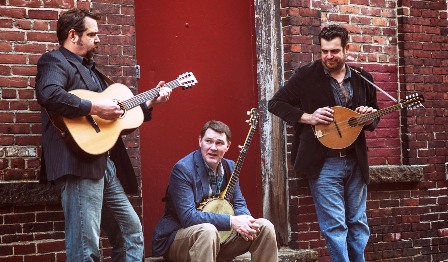 With a new album, and upcoming concerts across Canada, the U.S., and the Emerald Isle, Irish trio Makem and Spain return to their Celtic roots

Makem and Spain’s new album, Four Pounds a Day, includes thirteen traditional Irish tunes, many of them first heard when the band members were children, listening to their fathers play and sing.

Liam Spain, who handles vocals, guitar, mandolin, bodhran, bouzouki and harmonica for the band, says the album is a compilation of frequently requested songs.

“We had just finished our Sessions project – a big collaboration of American folk songs with some of our folk music heroes – and we started talking about a new recording,” he explains by email from in home in Dublin. “Fans at our shows have always asked what album this is on? – or which album is that on? – so we thought it would be a good idea to do an actual recording of those numbers. And I think the new album is also very indicative of our live sound and feel at this point in time.”

Spain, along with his brother and bandmate Mick – a rich baritone who, Like Liam, plays a variety of instruments – are of Irish and French Canadian ancestry.

“My father’s grandparents emigrated from Ireland around 1900,” notes Liam. “My mom’s family came to the United States from Quebec.”

Liam and Mick are the sons of Mike Spain, a popular musician who toured around New England for a quarter century.

“I grew up hearing this kind of music – The Clancys and Tommy Makem, The Weavers, The Dubliners, The Irish Rovers. They were on the record player all the time and I took to it early.”

“My best memories as a kid were hearing my dad and his friends sing in our kitchen. As a five or six year-old it just looked like so much fun. And today, the best times we have as a band are getting together with friends for kitchen parties. It’s just such a natural and honest way to play.”

At another New Hampshire home, Irish-born Rory Makem and his brothers were learning the same songs from their father Tommy Makem, a legendary Irish singer who is credited with launching ‘trad’ into the spotlight. As the Makem and Spain boys grew up, they sometimes found themselves playing at the same events, and eventually began performing together.

They band has now been around, in one form or another, for more than 25 years.

“Rory began playing in a group with his brothers back in the early 90s. My brother Mick and I started performing together around 1994. Both acts merged together around 2003 and the current lineup of myself, Mick and Rory has been touring together for the last few years.”

Though they have expanded their repertoire to include different folk streams, Spain says their sound hasn’t changed much since the trio began.

“We are just three guys going out and singing the songs we love. We take bits and pieces of the artists we admire and try to meld them into something our own. Acts like The Corries, Ryan’s Fancy and Schooner Fare have all had a huge influence on our sound.”

Along with good times, the band is driven by the hope that their ballads will inspire future generations of listeners.

“It is just such an important part of Irish music and history. A great melody is always nice but for us, it has got to have a story to it. When and if you combine the two, then you are on to something special.”

That ‘something special’ includes songs of the sea, of miners and other working people, of love and strife, and the ancestral homeland.

“The songs and arrangements pretty much evolve on their own. If we can’t make it sound right after the first few tries, then the song probably isn’t for us.”

When pressed, Spain acknowledges that his favourite cut on the new album is an old standard, so often performed by The Clancy Brothers and Tommy Makem, Red is the Rose.

A second Makem and Spain Sessions album is expected in October, followed by another full tour of Eire.

“We just have to keep bringing it to the people. I think there is always room to further promote and preserve our culture – language, music, history, literature. If folks stop doing so, it might be lost along the road.

“And, at the end of the day, we get to play music on stage for a living. That’s something we all dreamed about growing up. It really doesn’t get any better than that.”