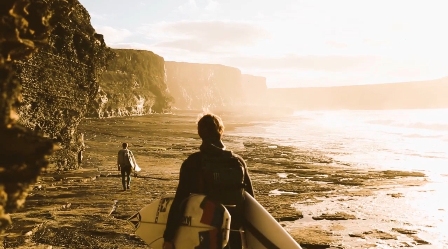 I realized the Celtic surfing scene had come of age when I attended the world premiere of a movie called Waveriders in Dublin a few years ago.

The documentary focuses on the Irish roots of surfing, and examines the life of Irish-Hawaiian surfing and lifeguarding legend, George Freeth.

This introduced the world to the fact that the Celtic nations have waves as big and powerful as anywhere else in the world – if a tad colder and windier.Of course, this information was nothing new to those who have been surfing these waves for decades.

Cornwall, along with the Basque country, first saw surfboards grace its summer swells well over fifty years ago, and the sport gradually crept around the coves, bays and beaches of Europe’s Atlantic coast.

People were riding waves at my own local breaks in Pembrokeshire, Wales, only three or four years after the sport was introduced to Cornwall. Photos exist from the early ’60s of members of the Porthmawr Surf Life Saving Club when the club was based in an old railway carriage.

I was shown the photo by the club’s founder, Dr. George Middleton of St. Davids, now in his eighties and still getting into the surf occasionally on an old belly board. He is responsible for two more generations of Middletons currently riding the surfin Pembrokeshire and Cornwall.

Paul McHugh, who was making rudimentary surfboards in the ’60s, was another surfing pioneer to the Welsh region. “I think I was one of the first to surf down here,” he says. “Then people started coming here from Cardiff. But there were few young people in Pembrokeshire – there was no work. Then Pete Bounds (former British and Welsh surfing champion) and Paul Ryder (known as ‘one of the founding fathers of Welsh surfing’) moved down here and things slowly took off.”

This experience of surfing being ‘drip fed’ into the Celtic regions was also common to Scotland and Ireland.

Ireland’s west coast in particular is renowned for the quality of its surf, but it’s understandable that not too many people wanted to paddle out into its waters forty or fifty years ago. Back then, wetsuits didn’t particularly keep you warm; they were more of a device for slightly delaying the onset of hypothermia.

But by the time I was getting into surfing in the late ’70s and early ’80s, wetsuits were much improved, as were surfboards, and anyone who surfed in Britain was well aware of the quality of the waves along the country’s Celtic coastlines.

I remember making surf trips from university in the north of England to the Llyn Peninsula in north Wales, the heartland of Welsh culture, and being fascinated to hear Welsh being spoken by local surfers.

Like many other surfers, I’ve met several friends in the waves at remote surf spots in Ireland and Scotland who I still remain in contact with today; for clichéd as it sounds, Celtic surfers are invariably a welcoming bunch.

As an Englishman living in Wales, I’ve encountered no end of stick over rugby, football and even politics, but not once has anyone ever raised the issue of my Anglo-Saxon heritage when I’ve been surfing.

In fact, one of my proudest moments came earlier this year when, whilst checking out the waves rolling in at my local beach, a Welsh surfer friend told me, “You’ve been surfing here for thirty years now boy…I reckon that makes you one of us.”

Back in 1990, I was surfing a small summer swell at Fraserburgh on the North Sea coast. I got chatting to a local surfer named Billy and informed him that I was heading up to Thurso. He asked for a lift in return for a couple of nights’ free accommodation in a ramshackle caravan he owned there.

Today, Thurso is packed with surfers on any good swell as it’s one of the best reef breaks in Europe, but in those days the numbers were much smaller. It wasn’t just the cold that put people off though; it was the serious nature of the waves, which are fast and heavy and break over a shallow rock shelf in the daunting shadow of acastle on the shore.

Surfing there one evening,one of the locals advised us that if we’re all going to go for an après-surf drink together, we’ll need to keep the surf session short as the pub closes at midnight. This was June, and being in northern Scotland, we’re still in the water at 11.30pm.

It’s light again by 3am, which means that if you’re fit enough, you can surf here for more than 20 hours a day in midsummer.

Wales has its own version of Atlantis. Ancient mythology describes a land, now sunken in the waters of Cardigan Bay, called Cantre’rGwaelod, which translates tothe ‘Lowland Hundred.’

Although the ‘Lowland Hundred’ was inundated and is no more, the church bells of this mysterious land are still said to ring out in times of strife; and in 1770, a Welsh scholar named William Owen Pughe even reported that he saw human habitations underwater there.

Whilst I can’t vouch personally for any of that, I can tell you that this is a stretch of coastline that often has excellent (albeit cold) waves in winter, when huge, unsurfable swells batter the more exposed coastlines to the south of Cardigan Bay.

Some of the best waveriders in Europe, such as former European Longboard Champion, Chris ‘Guts’ Griffiths, regularly make the journey here from bases in South Wales and even England to score the excellent point breaks it offers.

But you can, on occasion, still get the waves to yourself.You might even today find something of the atmosphere experienced by the likes of Paul McHugh and Pete Bounds when they first ventured to Wales’ furthest corner in search of surf, over fifty years ago.

I had been spending the last few days in the busy seaside town of Bundoran which regularly hosts the Irish National Surfing Championships. In order to escape the hullaballoo of the busy surf capital, myself and ‘The Gill’ (surf photographer Paul Gill)decided to head up to Bloody Foreland in the parish of Gweedore.

This is the largest Irish-speaking parish in the country and, as with areas of my home county of Pembrokeshire, English is very much the second language. Fortunately the old boy who we got chatting to as we stopped to check our map gave us directions in English.

When he saw the surfboards on the roof of the car he asked, “So you’ll be looking for a sloping river then, lads?” with a deadly serious look before cracking a wide smile.

He pointed us in the right direction for a bay that doesn’t even have a name on the map, where we found a perfect gin-clear point break with just three other people in the water, one local and two New Zealanders.

News of how good the Irish surf is has clearly made it to the other side of the world.