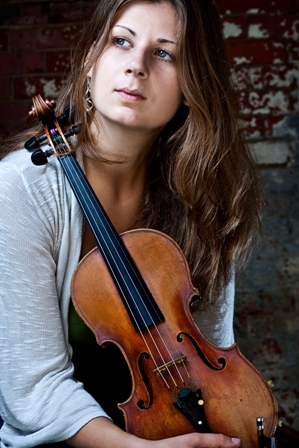 Mari Black’s baby photos show a little girl fiddling with garden trowels and chopsticks – surely a sign of things to come for the world champion fiddler.

“I can’t remember not playing,” shares fiddler Mari Black via email. “As a little kid, everything I saw looked like a violin.

“Music has always been such a big part of how I see and experience the world that I don’t recall a specific ‘ah-hah’ moment the way some other musicians describe. I do remember a very strong sense of being drawn to music, and to this instrument specifically – that’s probably why I say ‘the fiddle chose me’ as opposed to the other way around – and of wanting to play, to create sound that made me feel things.”

“I even still play along with recordings that feel magical – trying to become a part of those gestures, tap into that sound. The difference today is that I am now completely focused on how I can share that feeling with other people. Being the catalyst for an impromptu dance of 50-plus children at a tiny outdoors harvest festival in Maine is every bit as thrilling as being invited to compete in, or win, competitions.”

Based in Boston, where she grew up, Black is a graduate of Yale University School of Music, and also has a doctorate from Columbia University Teachers College. Today, she balances performing and recording with teaching.

“Fiddling is very similar to when kids play games,” she notes. “There is a sense of magic to the play, a sense of ‘anything can happen.’ I want to draw people into that sense of wonder and fluent expression – of tales old and new, fun and mischief.”

Black’s musical heritage comes from her mother, a classical cellist and pianist with an admirable collection of vinyl.

“She taught herself to play as a teenager, and I grew up totally immersed in her performing and teaching.”

She adds that Celtic was, and remains, her first musical language.

“Celtic fiddling styles were among the first kinds of music I started exploring as a kid.

The first love has never left me because, nowadays, when I think of things like flying or freedom or letting loose, the soundtrack to those thoughts is Celtic. I also associate a sense of fun or playfulness with Celtic styles, and that speaks strongly to me in my quest for music that makes people want to dance and smile.”

Listening to fiddlers from various genres was a large part of her musical upbringing as well; on car rides, Black and her mother played games to identify composers; she “swooned to the fiddle-playing of Andy Stein”, and learned tons of Beatles songs alongside classical pieces.

Not surprisingly, she continues to love music from an array of traditions.

“To me a style or tradition is really a collection of stories about people who created that music. I think about styles of music like languages. The more languages I speak, the more people I can understand, communicate with and share stories with in a fluent way.”

She also plays the purist possible renditions of each style, so they may be passed on to both audiences and new generations of students in their most authentic voice.

“My quest to absorb stories from as many different people as possible has accidentally turned me into a sort of musical chameleon. My goal is to be able to switch seamlessly from sounding completely Scottish to completely Irish to completely Cape Breton and so on, as I attempt to share a diverse range of stories with an audience in a single show.”

For all her natural talent, Black still relies on old-fashioned hard work to grow as an artist.

“I am definitely a practicer – much of my best work comes as a result of just putting in the hours, playing tunes slowly, working a metronome, recording myself and listening back to spot things that need improvement. I always want to know why things sound or function the way they do. I also study non-fiddlers to see things from a different perspective.”

That includes watching dancers to see how music moves and manifests itself physically.

“I copy pipers and whistle players to find ornaments or phrasing ideas that a fiddler might overlook because they don’t sit naturally on the violin. I get a lot out of it, but it is definitely a methodical approach to improving as an artist.”

In 2014 she released her debut CD, Flight, and is currently working on two new recording projects. That busy schedule will be accented by an upcoming visit to Scotland, teaching at fiddle camps, and a full-slate of performances.

“I think the best way to keep any tradition or culture alive is to simply live it with as much purpose and joy as possible. In my experience, people are naturally drawn to sources of passion, and if you are excited about something, it is pretty easy to get them excited about the same thing.”