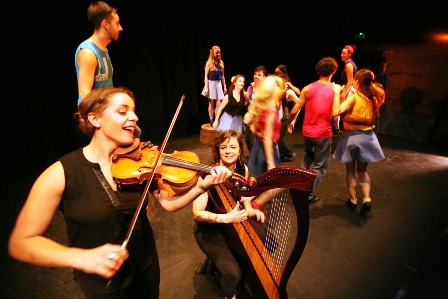 Marie-Pierre Lecault’s fondness for the fiddle goes back to her formative years.

Born in Quebec’s beautiful Laurentian Mountains region to a family of music-lovers, Marie-Pierre Lecault began her musical journey with classical violin lessons at the age of four. Inspired by her older sister’s efforts with the instrument, she was taught by both her mother her great-uncle.

“I have a bachelor of music in classical music performance, but I have always played traditional music,” she explains. “My father used to listen to traditional musicians, so from a young age I was immersed in that genre.”

It was only after graduating from university, however, that Lecault’s talent for ‘trad’ took to new heights.

Those skills will be on display this October, when she appears with Montreal-based percussive dance company [ZØGMA] at the ReJigged Festival in Dartmouth, Nova Scotia.

The thirty-something songstress says that traditional fiddling is “more relaxed, more human,” adding that it took years of hard work to acquire a signature sound which she now describes as “rich and colourful.” She searched a long time before finding a proper bow, and even longer to determine the best strings for her fiddle, concluding “the hank of horsehair gives me more precision.”

“The best thing about finding one’s sound is that the search is never really finished.”

“And then that acoustic sound must be transferred to an amplified sound for concerts, so it is vital to find the right microphone, the perfect pick-up and preamp.”

Lecault believes her “musical personality” emerged after she finished her classical studies.

“For me, the challenge was to slowly fade out of my classical training and ease into the traditional music milieu. It happened gradually, leaving me time to cut the umbilical cord and feeling good about it.”

She credits Quebec virtuoso André Brunet with influencing her both her musicality and enthusiasm.

“When he started playing with (folk group) La Bottine Souriante, I was a young teenager. I didn’t know that I would choose the same musical path several years later, but I knew that I wanted to sound like that.”

She now teaches at traditional fiddle camps with Brunet, noting that it is a great experience to work with her childhood idol.

The real trick of the trade, she shares, is about finding balance.

“You have to learn to juggle slowdowns and be able to turn around quickly. Holidays are scarce and exhaustion threatens because you have to work constantly not to be forgotten. I find it more and more difficult to find a balance between my artistic life, my personal life, and my many projects.”

She has already enjoyed an enviable career, with rewards coming in the form of world travel, musicians met, friendships made, and the simple joy of playing.

“A good fiddle tune comes from the way it is played. If a musician is inspired, with a groove and a good sound, you can really hear it.”

“For myself, I love crooked tunes, tunes that are a little quirky – the kind of songs that challenge my own abilities as a player.”

Lecault has been collaborating with [ZØGMA] since 2005 when she joined its Rapaillé production. The piece was presented more than 80 times, and toured Niger, South Korea and California. She continued with its follow-up Sokalo, and now takes her place with the current Sokalo Remix production, a full-scale spectacle that includes Irish dancers and musicians.

“It is a show of great technical precision from dancers and musicians. The storyline behind Remix is built around memories of our careers over past years and the importance of these experiences in the making of who we are now. The result is a beautiful artistic adventure connecting the cultures of Quebec and Ireland and showcasing musicians and dancers who value their traditions.”