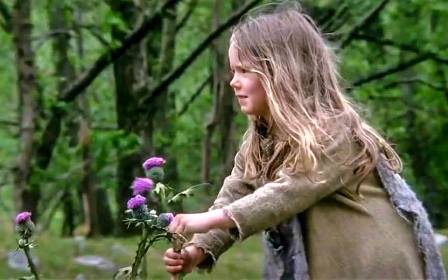 All eyes rest upon the bodies of Malcolm and John Wallace…all eyes except for those of a young girl named Murron. She tenderly gazes at the boy who has just lost both his father and brother. When the funeral mourners depart, and William Wallace remains behind to watch the soil shovelled atop his closest kin, young Murron breaks free from her mother’s grasp. She picks a purple thistle and hurries to give it to the boy. Their eyes lock, Murron offering silent solace as William sheds a tear.

It is one of the most memorable scenes from an iconic movie, the five-time Oscar winning blockbuster, Braveheart. It was Mhairi Calvey, then five years old, who played the part of young Murron for the film. She had been scouted while going about her day on the Isle of Arran, a place she still considers home.

“My parents didn’t take me to an audition,” recalls Calvey. “I was spotted by Jina Jay and Patsy Pollock, the casting directors for the movie. They auditioned me in the school playground at Pirnmill Primary School in Arran, and a week later I was on set.”

She says it was “luck” that led to the role in the major motion picture, but perhaps, in fact, it was fate. When most children her age were obsessed with cartoons, Calvey was watching black and white films. “My mum said from about the age of two she could tell I was going to be an actress.”

Throughout her childhood and adolescence, Calvey gained valuable experience on the stage, from theatrical productions to walking the runway at the annual Dressed to Kilt fashion show in New York City. She trained at York College, before receiving a full scholarship to attend the Guildford School of Acting, where she completed an honours degree. Not long after graduation, she became highly sought-after for a series of independent films.

“My favourite moments are when you are on set at 3 a.m – it may be freezing temperatures, but you see all these incredible people around you working hard on creating an amazing project. Passion like that is infectious.”

In the U.K. horror-romance production Any Minute Now Calvey played narcoleptic teen Anna Brooks, a role she received a Best Actor/Actress nomination for from the BloodGuts U.K. Horror Awards. She played Ruth in Five Pillars, a part that British director Jon Rosling added to the script when he discovered her talent. She also took on the role of Anna in the zombie thriller, Virus of the Dead, and Jessica in the short film Gemini, for which she won a Best Actress prize at the LA Film Festival.

“Most recently I finished filming a movie called Alan,” adds Calvey. “I got to work with the cameraman Peter Robertson, who filmed that amazing shot in Atonement. Working with Peter was incredible.”

Earlier this year, it was announced that Calvey has been cast as Flora MacDonald for the forthcoming multi-million dollar Scottish epic, The Great Getaway, which chronicles the life of Bonnie Prince Charlie. A Scottish heroine, Flora MacDonald helped the prince escape to the Isle of Skye after the Battle of Culloden. 500 extras are expected to participate in the film’s battle scene.

“This is my dream role and I can’t wait to film it,” Calvey shares about the part – one that Kristen Stewart had also been in the running for. “When that movie happens it will be the biggest highlight of my career.” 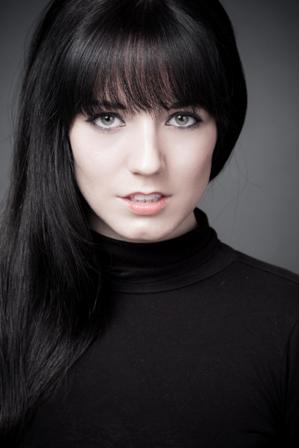 Calvey is particularly passionate about doing research for her roles. For the part of Flora she has already spent countless hours reading books and online sources. “Through the character research, you get to learn things that other people will never get to discover. I’ve learnt so much about history, and because of the films I have already done, I have learned so much about Scottish history in particular.”

She says acquiring new skills is also an important part of character development. For different acting projects she’s learned to play guitar, sing and horseback ride. For The Great Getaway, she has been working on Highland dancing.

A love of acting has kept Calvey persistent in a challenging industry. “You can work hard to get the job, and after eight auditions land the part – then you have to hope that the film gets funding and that it will go ahead. That is very difficult – it’s a little like gambling.”

While family members and friends have been extremely supportive of her vocation – watching her films, going to her premieres, and being there when she “falls” – others have been more cautious.

“My mum has always been supportive,” shares Calvey. “She has never allowed me to quit anything regardless of how hard it may be. It’s one of the reasons I am still in the industry today. But some people have told me I haven’t achieved anything in my life, because I don’t work in an office each day and get a regular annual wage. Being an actor is a bit like being a secret agent that way – nobody really understands the world you live in, but they all have opinions about it.”

In addition to the upcoming productions she will be working on in Scotland and elsewhere, Calvey is keeping busy with other projects she’s initiated. One is her Key Screen Academy, where she provides professional advice to emerging actors on the business side of the industry.

Another is raising awareness about mental health. Last year, she founded Think Differently Do Differently, an program that helps those dealing with depression. “I hope to grow this into a worldwide charity which can help more people.”

One of her dreams is to establish a fund for independent Scottish filmmakers. She also thinks it would be beneficial to collaborate with other artists to work towards growing Scotland’s film industry.

“A lot more films and television series are coming out of Scotland these days, which is wonderful, as there are many talented artists who are finally getting the recognition they deserve. I hope it continues to grow, and I hope to be a part of that growth. Personally, I would love to do more productions in Scotland – and not just ones where I act, but where I am involved in the actual production process.”

Although Calvey’s ambition continues towards a variety of professional pursuits, acting will probably never ‘fade out’. “My love for acting has kept me going through everything. Nothing makes me feel as happy or alive as when I am on set or stage. I know it’s where I am meant to be.”