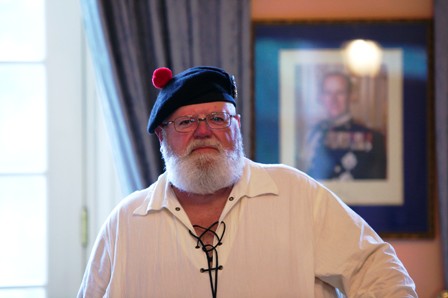 It looks like sunny skies for today’s 10th Moncton Highland games. Recently we spoke with organizer Ian Gunn about what attendees can expect to enjoy.

What is your own ethnicity?
My heritage is of Scotland, Ireland and Brittany France

When and why did you get involved with the Games?
I first became involved with the Moncton Highland Games in year three after visiting them during two – I wasn’t aware of them until after the first one. At first, it was to represent Clan Gunn of Nova Scotia, of which I am the current president but was a board member then. I felt it was a great way to introduce our clan to the Moncton area and learn more about how highland games were organized.

What are your roles and responsibilities there?
Currently, my role is divided into four areas of responsibility; A/ organize clan alley by approaching clan representatives to attend our games, B/ entertainment- arranging for music entertainment in the pub tent of Celtic origin, C/ attractions for the kids- looking at various kid friendly items for the younger set to try and have fun on like bouncy castles, sheep herding, super dogs, archery, fly fishing instructions, workshops, D/ advertising.

Why is it an important event for the community?
With Moncton becoming a multi cultural community, it is important that new comers as well as original families become aware of the contribution that all ethnic peoples played in the building of not only our city but Canada as well.

Who traditionally attends the gathering?
Traditionally, we have a broad base of people who attend our games. From the young to the seniors, those looking to discover their heritage to those wanting to know what we Celts are about.

What can they expect this year?
This year is our 10th year for our games and will find a mix of traditional competitions in dance, piping and the heavy athletics. We will also have sheep dog herding, as well as JJ White and his frizzbee dogs performing, the Society of Creative Anachronism (new)- time period they cover is from 1500 to mid 1600. Also, we’ll have full contact combat, knife throwing, period costume, music in the pub tent, and workshops covering genealogy- piping and other Celtic interests. We also will have the 8th Hassars represented as well as older military vehicles as we support our troops and Veterans. Clan alley will be nicely represented by a number of clans, massed bands to officially open the games at noon and again at days end to close the event. Lots of food and vendors will also be in attendance.

How has the event evolved through the years?
Over the years, we have grown from a small city park, to high school athletic fields to a large sports complex. Our dance, piping, and heavies events have grown from small numbers to capacity and the spectators numbers continue to grow for these events. We’ve also seen over all attendance grow and more events and Celtic clans and groups attend. Highland games are always a work in progress to keep is familiar but fresh at the same time.

Will you remain involved with the event in the years ahead?
My intention is to stay involved over the coming years but to also mentor someone to step into my shoes down the road as fresh eyes keep events like ours growing.

How else are you involved with the Scottish community there?
I am also involved in the Greater Moncton Scottish Society which hosts not only these games but Burn’s night festivities, Tartan day events, competitive dance events and I represent Clan Gunn Nova Scotia locally. I am also a director of the local society.

Is enough being done to preserve and promote Scottish culture generally?
Is there enough being done to promote Scottish culture. That’s a tough question. One could ask,what is enough promotion. I think the answer is it never really stops. Some will promote our culture in subtle ways like wearing a tartan tie to work or special events like hosting a dinner party with Celtic foods. Learning about the history of your family back to their roots is also vital, as is becoming involved with a clan society and local Scottish/Celtic groups. Become proud of your heritage as it’s just as important as others.

What can we be doing better?
Cultural magazines like Celtic Life International and others are one of many ways to introduce people to our heritage and that helps. But it comes down to getting people involved and allowing them to be part of the group. To explore how to grow the group and interest – not just stick to the tried and true. We must support our clan societies,local societies and events. Everyone should be proud of their heritage and not be shy to show it at every opportunity. Never be shy about trying something different to show that pride in heritage.