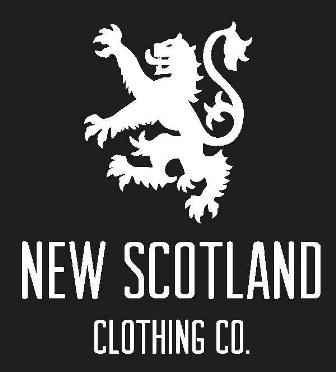 A couple of competitive curlers from Nova Scotia are making a big splash with their new clothing line, creating a ripple across the pond.

Brothers Kevin and Scott Saccary incorporated New Scotland Clothing Co. barely a year ago, but Scottish world curling champion David Murdoch and his teammates will be sporting the fledgling company’s distinctive gear on and off the ice this season.

“We are one of the Murdoch team’s apparel sponsors, and it is advertising we couldn’t even dream of when we started,” shares Scott. “It is going to be pretty cool to have Scottish players promoting our history and culture.”

In the weeks before Christmas, 2014, the brothers offered family and friends a test run of 50 hoodies and tees, sporting either of the company’s two logos. They sold out, brought in a much larger order, and had nothing left by Christmas.

Scott remembers the thrill of walking down the street in Halifax and meeting a stranger wearing a New Scotland Clothing Co. hoodie.

“I was so surprised to realize I didn’t know who he was, not a friend and not a relative. That’s when I felt we might really have a business.”

Since then, the brothers have acquired a mobile store, which they set up at markets and festivals, and have also established an on-line sales presence, enlisting family and friends, as necessary, to keep up with demand.  Both Saccarys are employed with the same large construction company, Kevin as IT manager and Scott as an estimator, so New Scotland Clothing Co. is an after-hours business.

The brothers credit their Scottish grandmother, who was born in Carmunnock and immigrated to Canada in 1951, with having a strong Celtic influence on the family and sparking their interest in curling.

“Kevin and I started when we were 10 or 12, but we’d always been around curling because our grandmother curled and our parents both curled. Dad coached us for many years.”

Kevin was busy with a young family and Scott was just back from six months of backpacking in Australia, New Zealand and Southeast Asia, when they launched the business.

“We are the only two siblings so we’ve always been pretty tight,” continues Scott. “Our parents had a motor home and we travelled everywhere together. We curled competitively together and played in the junior national together, so being in business together is nothing new.”

New Scotland Clothing Co. emerged from a blend of entrepreneurial spirit, a pride in their Scottish heritage, and an old gripe about curling.

“I suppose it really began with us always complaining that there is never anything cool for curlers to wear,” explains Scott, who at 30, is the younger of the two.

With the exception of the vibrantly coloured and patterned Norwegian men’s curling team – not a look the Saccarys were going for – they had a point, though they quickly concluded they would not limit their products to curlers. One of Nova Scotia’s competitive pipe bands is also sporting a New Scotland Clothing Co. line.

“We kicked around ideas and kept coming back to the fact that Nova Scotia has been great for us in terms of curling and life, in general. We decided to make our province, Nova Scotia or New Scotland, our brand.”

They settled on “Share your Pride. Wear your Roots” as a company slogan. Their classic shirt logo features a maple leaf and the company name, while the lion logo – which has been the more popular to date – depicts the traditional lion rampant above the company name.

Last spring the Saccarys hosted Nova Scotia Night at the world curling championships in Halifax after their provincial team was knocked out of national competition. Party-goers cleaned out their entire stock.

“We wanted to make sure that the athletes and teams in Halifax for the worlds (curling competition) knew that we’ve got Nova Scotians who are passionate about curling. We also wanted them to remember the great parties we throw here.”

And if their New Scotland Clothing Co. tees and hoodies made it all around the world as a result, that is just good business.

Between their day jobs and the new business, the Saccarys still manage to keep their feet on the ice and a hand on a curling broom – Kevin as president of a local club and Scott as second on Nova Scotia’s Team Murphy on the 2015-2016 world curling tour.