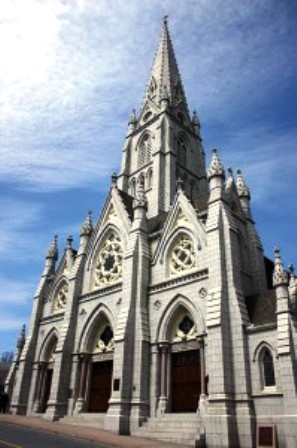 During the nineteenth century, one Irish-born American immigrant left his mark on eastern Canada and the United States. Architect Patrick Charles Keely (1816-1896) has over seven hundred buildings to his credit across North America.

Keely’s father was a builder and architect in County Tipperary, Ireland and had come under the influence of Pugin, the leading light of neo-Gothic architecture. Augustus W. Pugin (1812-1852) was an English convert to Catholicism at a time when a reaction to strict classicism was underway. Novels such as Sir Walter Scott’s Ivanhoe (1820) and Victor Hugo’s Hunchback of Notre Dame (1831) were part of the broader movement which inspired a reconsideration of medieval art, architecture and thought. Pugin’s own writings on the subject, True Principles of Pointed or Christian Architecture (1841) and Contrasts (1836) had a wide, transatlantic readership.

Keely appears to have never met his near contemporary before emigrating to the United States, but avidly read and discussed Pugin’s advocacy of the Gothic style. His own Irish Catholic roots inspired Keely to look back to medieval church design. Exterior design evoked the great Gothic cathedrals of the British Isles with their upward thrust in construction: long lancet windows, stone arches and buttresses, rose windows, ornamental crockets, multiplication of threes in motifs for the Trinity and some earlier Norman elements with “dog-tooth” stone rows framing doors and interior arches.

Keely arrived in Brooklyn in 1842. His first significant contract was for the neo-Gothic church of Saints Peter and Paul. His subsequent work included designing both the exterior and interior of new churches and remodelling older buildings. Keely built up a business of apprentice architects, builders and decorative artists. From Arkansas and Connecticut to Vermont and Wisconsin, Keely’s buildings have survived in at least 16 states; New York State boasts 13 of his structures and at least 37 of Keely’s churches were constructed in Massachusetts (some have since been demolished). North of the border, Keely’s name is associated with churches across both Quebec and Atlantic Canada.

Two churches are modeled on his designs in the Maritimes, in Tignish, P.E.I. and Halifax, while his interior work is found in a Saint John, New Brunswick church.

Peter MacIntyre invited Keely to design the Church of St. Simon and St. Jude in Tignish, marking his Canadian debut. MacIntyre was a friend of Archbishop Connolly of Halifax. That connection reinforced Connolly’s interest in the man who was by 1860 being called the “Pugin of America.”

Keely’s Island church was realized in brick and sandstone with a central entrance tower and spire supported with buttresses and the typical neo-Gothic arched windows. The neo-Gothic vogue in churches was not unknown to Thomas Connolly. As new bishop in Saint John in 1852, he announced his intention to build a new cathedral. Connolly’s Saint John successor, Bishop John Sweeney, had local craftsmen build the high altar, reredos and other ornamental features according to plans drawn up by Keely.

In Halifax, Bishop Connolly wanted Keely to plan an enlargement and redesign of St. Mary’s Cathedral to firmly establish the Catholic Church’s stature in the provincial capital.

It was in the aftermath of the American Revolution that Irish Catholic merchants and other leading laity obtained permission to construct St. Peter’s chapel. Work on the stone church began in 1820; Bishop Edmund Burke is said to have drawn the plans himself. The new St. Peter’s faced Spring Garden Road; its central square tower of iron and sandstone was pierced with Gothic arched windows and a crenellated top. It became known as St. Mary’s in the 1830s. Buried in the graveyard between the two wings of the old and the new church were many of St. Peter’s early Irish and Mi’kmaq worshipers. Their descendants and new immigrants assisted with St. Mary’s upgrades in the 1860s.

Older lithographs clearly show St. Mary’s two rows of side windows — the windows below have a simple square design, while those above are arched Gothic frames. Keely’s redesign called for the removal of these openings, which were then replaced with tall lancet windows (later dignified with stained glass.)

Connolly had practicality in mind (St. Mary’s congregation had outgrown its seating capacity), but he also wanted to match the aesthetics of the neighbourhood (St. Matthew’s Presbyterian across the intersection had been built in French Gothic style) and to give glory to God. Both Architect and Bishop succeeded by all accounts in that the great granite facade of St. Mary’s is still one of the iconic images of Halifax.

Keely’s first plans called for twin towers reminiscent of his design for St. Patrick’s Cathedral in Brooklyn. However, economic considerations altered that to one central spire.

His interior work included the removal of the three-sided upper galleries to permit the placement of new windows which flooded the church with cascades of light. He extended the row of central pillars and arches of the imitation-vaulted ceiling; later, the pillars would be given a faux marble effect. The ceiling of plaster and wood created excellent acoustics in a pre-electric age.

The revised facade would not be commenced until 1868. Keely’s design was enhanced by the importation of polished red Aberdeen granite to flank the three main doors. This front is similar to that of the Cathedral of St. Colman (Cobh, Ireland) also begun in 1868.

One Lord, One Faith, One Baptism: These words are carved in stone above the three main doors; both Keely and Connolly were well aware of the significance of threes. The facade in this regard reflects the medieval/neo-Gothic tradition of church entrances. Each granite doorway has its pointed arch and columns. Above the main central door is a circular window framed in wood with plain-coloured glass calling to mind the Rose windows honouring the Mystical Rose (Mary).

The quatrefoil (four-petaled leaf) motifs are found throughout the Basilica. Immediately above each door is an arch in stone wherein a quatrefoil window is set in wooden frames. The outer portion of the stone arches are framed in a raised arch, the two lower ends of which end in a foliate ball referred to as a “hood-mould”. These sections of the entrance are then topped with carvings of a quatrefoil variant. Above these, one sees the great windows and further up elements which recall stylized fleur-de-lis.

The whole culminates in a cross, which was installed on September 7th, 1874, rising to a height of 189 feet above ground level. At the time, it was considered the tallest free-standing spire in North America. The impact of the height is overshadowed today by modern buildings nearby. An idea of the steeple’s impact can be partly recaptured by walking down Argyle Street to meet Sackville; from that location the Basilica can be seen rising against a clear sky.

Keely’s and Connolly’s collaboration of nearly a century and a half ago remains realized in granite, religious pride and the visionary eye of the architect from County Tipperary.