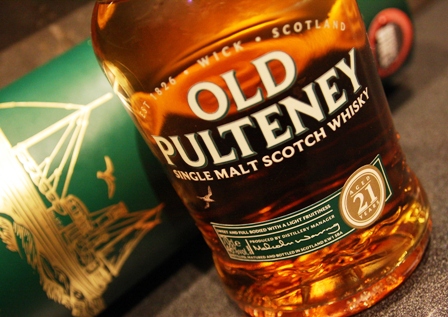 Located several hours north of Inverness, the Northern Highland Distillery of Old Pulteney is one of Scotland’s most remote. Pulteney was once Scotland’s northernmost mainland distillery, but lost that title in recent years to the newly built Wolfburn in Thurso. That may be liberating, however, as the claim of “northernmost distillery” is a shallow one, with no effect whatsoever on the quality of the Old Pulteney’s  world-class spirit.

While aficionados and critics have long praised Old Pulteney’s whisky, it has dwelt in the second tier of brands for years. For those in the know, the spirit has been a carefully guarded secret of sorts.

A string of awards over the last five years have pushed Old Pulteney into the international spotlight, however, where it rightly belongs. Most recently, the distillery was awarded Single Malt of the Year at the 2016 World Whisky Awards for its superb 1989 vintage. The spirit in question, a curiosity of sorts, was made in the distillery’s unpeated style, but matured in whisky barrels that had previously been used to mature peated whisky.

Old Pulteney is one of only two distilleries in Scotland that is named after a true-to-life historical figure; in this case, Sir William Pulteney (1729-1805). Reputedly the wealthiest person in the United Kingdom in his day, William Pulteney was a patron to the famous architect Sir Thomas Telford, and the owner of vast lands in both the UK and North America.

He was also responsible for the British fisheries at the time of a herring boom in the North Sea. Pulteneytown – a purpose built herring port to the south of the Royal Burgh of Wick – was named in his honour. The town was well-known for absorbing migrants from the Highland Clearances seeking work in the growing fisheries industry.

Inaccessible by road or rail, Pulteneytown had to be supplied by sea. Residents had difficult lives and a deep thirst. Old Pulteney distillery opened in 1826 and made sense, both financially and otherwise, for the area. The town’s people were said to consume upwards of 500ml of whisky a day for every man, woman and child. Drink was still a scourge in the town a century later when James Watson purchased the distillery in 1920. By this time Pulteneytown had merged with the Royal Burgh of Wick. Two years later, by majority vote, the local Ward declared prohibition in the area, which lasted for 25 years and a day. The distillery survived a few years of prohibition, but closed in 1930.

Its fortunes, however, would soon rebound, and Old Pulteney reopened in 1951 as post-war demand for whisky in Europe began to recover. Major refurbishments took place to modernize the distillery in 1958, and the traditional floor-maltings ceased. In 1997 the current owners – Inver House Distillers – launched their 12 year-old single malt in a bespoke bottle, inspired by the distillery’s unusual stills. While the whisky would traditionally have been peated, today there is virtually no trace of it. The core range consists of 12, 17 and 21 year-olds, with some older expressions and one-offs in the mix.

Old Pulteney may not be the northernmost distillery on Scotland’s mainland anymore, but it has built a solid reputation over the last two decades with its world-class single malt. The coming years look very bright for the company, as it arcs towards its 200th Anniversary.

Old Pulteney 17 Year Matured in American and European oak, the 17 year is woodier with sea salt, honeycomb, dried fruits and a touch of leather. $135

Old Pulteney 1989 Vintage Whisky Magazine’s Single Malt of the Year, this vintage expression was matured in 2nd Fill American oak casks which had previously matured a peated Scotch whisky. The result is a very complex, creamy whisky with a touch of salt and smoke, and loads of tropical fruits. $340