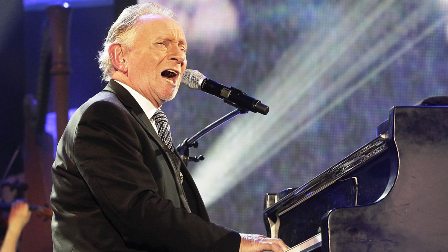 It is only when confronted with the vast array of awards which adorn the walls of his new office in Bray, County Wicklow that one can begin to appreciate the full extent of Phil Coulter’s success. A veritable Aladdin’s Cave of platinum, gold and silver discs, they stand in mute testimony to a life lived at the heart of popular music. When I meet him, he is reassuringly self-effacing and candid all at once. He is wont to talk about any topic that takes his fancy, but ultimately the predominant force which fires his imagination, wit and repartee, is music.

An accomplished composer, arranger and performer, Coulter’s popularity has long since transcended that of mere celebrity to that of a true musical icon. “I have been given way too much credit for being smarter than I actually am,” he shares with a wry smile. “Each career progression was preceded by the necessity to change as much as any compulsion to hone one’s craft. I certainly never did it for fame. If you want to be famous then don’t be a song writer. When I was growing up in the Fifties, everyone wanted to be Elvis. I wanted to be play piano like Fats Domino or be the MC standing out front with Bobby Darin and his big band.”

Born in war-time Derry in February 1942, the young Coulter was as far away from Tin Pan Alley and Rock ’n’ Roll as he could ever imagine. Back then it must have seemed unlikely that this teenager would go on to be a presence at many of the pivotal moments in recent history. Further that he would provide his very own soundtrack as that story unfolded.

However, a series of fortuitous breaks assured his date with destiny. After winning a scholarship to attend Queen’s University, Belfast, he joined its Glee Club and went on to write, produce and release his first record while still a student. There followed a brief cameo at the heart of the Irish Showband scene, before he turned his back on academia and set off to make his fortune across the Irish Sea.

The first wave of Beatlemania had just shifted the world of Pop music on its axis – from the Brill Building of New York to the publishing houses of Denmark Street, London. Young Coulter would not be denied. All too soon, he discovered the reality of his posting in a publishing house didn’t quite live up to that of his own fevered imaginings. He persevered, moonlighting as a session musician and arranger for the likes of Van Morrison, Tom Jones and The Rolling Stones. He formed a song-writing partnership with Bill Martin, and before long they had their first real break when a bare-footed, Sandie Shaw walked away with first prize in the Eurovision Song Contest, singing the duo’s Puppet on a String. They almost repeated that feat the following year, in 1968, when Cliff Richard sang their upbeat composition Congratulations! to a second place finish.

The Seventies saw Coulter at the pivot of a movement which ultimately elevated Irish folk music from the tawdry environs of smoky bars to that of grand theatre status.

Travelling between London and Dublin, he produced three Planxty albums, making a household name of Christy Moore. Luke Kelly and Coulter struck up an unlikely rapport which spawned yet even more hits, including Scorn Not His Simplicity and The Town I Loved So Well. Few songs in the canon of Irish folk music evoke that troubled period quite like this classic. It treads a fine line between a rabble-rousing rebel song and that of a wistful prayer of hope. This has not prevented the more nefarious elements within the wider nationalist community from appropriating it for themselves. Only in recent years has its true purport, as realized by its author, been fully appreciated.

In 1973, My Boy – a song which Coulter composed for Richard Harris – received the King’s imprimatur. A plaintive ballad, its tale of marital discord clearly resonated with the newly-divorced Elvis. Coulter’s one meet with him was to prove to be the shattering of a myth. Presley, who once heralded the dawn of a new era from the flip-side of his shiny Sun Records, was now no more than an incoherent wreck. For Coulter it was a sobering experience. The next meeting would take on a decidedly tartan dimension when Coulter became part of the production team responsible for foisting first the Bay City Rollers and then, Billy Connolly, onto an unsuspecting public. Success here was tempered somewhat when Coulter’s first marriage foundered, and his professional partnership with Bill Martin came to an end. The world of ‘bubble gum’ pop had suddenly lost its flavour, he decided to steal away with new love, Geraldine Branagan and start anew.

The Eighties found Coulter back in the studio, this time with Finbar Furey, to record Stealaway and The Old Man. Just as Congratulations has become a perennial favourite at Irish weddings, The Old Man has become interwoven into the very fabric of Irish life as a funeral song. A reflection on the boyhood memories of a recently departed father, The Old Man arrests the listener with a deceptively simple melody, underpinned by lyrics which are universally understood.

In 1984, Coulter’s career took a marked departure when he recorded an instrumental album based around his own distinctive piano-playing style. He gave it a nuanced orchestral twist, and his signature piano sound was born. The resulting album, Classic Tranquility, went stratospheric in terms of sales, only being eclipsed by its successor, Sea of Tranquility. There then followed live performances which presented Coulter with a whole other set of challenges.

“Up to that point I had been largely anonymous to all but aficionados of pop. Then suddenly, I was thrust out there in the spotlight, in front of large crowds every night. It was as exhilarating as it was daunting. There is an immediacy there you would never experience as a songwriter.”

The transition from puppeteer to puppet also demonstrates Coulter’s uncanny knack of being on trend in a business which is prone to the whims of the zeitgeist like no other form of the arts.

He honed his act to include the singing of his own compositions “only because they are so personal to me, they have come from my own experience. Like Scorn Not His Simplicity which is about my son who died from complications arising from Downs Syndrome. It’s the same with The Lake of Shadows – from the Irish translation for Lough Swilly. That’s where my sister and my brother drowned.”

In 1998, peace was finally brokered between the warring factions in Northern Ireland and the governing bodies of the Republic of Ireland and the UK. Coulter’s The Town I Loved So Well was never too far from the lips of those of who had dared to dream of its oft-quoted lyric “of tomorrow and peace once again”. John Hume famously sang the song on the night he and David Trimble received the Nobel Peace Prize in Oslo, and Coulter was on hand to accompany on piano. In so doing, the pair brought to a close a chapter begun many years thence from within the cloistered confines of St. Columb’s College in Derry. For it was there that Hume, Coulter, and Nobel Laureate for Poetry, Seamus Heaney, were prepared for university and the world. If Coulter provided the soundtrack to this great era, then Heaney’s poetic ruminations would supply the central sound-bite and subtext – “hope and history rhyme”.

It is easy to dismiss as hyperbole, the role played by the ethereal in providing the context by which a peace accord was eventually struck. But on such serendipity do the fortunes of men depend. Wherever the truth lies, the new spirit of détente which prevails to the present day found expression in yet another Coulter composition. Ireland’s Call has assumed a much greater significance beyond that of its original remit as a mere rugby anthem. To a whole other generation unencumbered by the myopic vision of nationhood espoused by their forefathers, it has come to represent their notion of what it means to be innately Irish, without necessarily being defined by the same cultural constraints.

Now, in his mid seventies, Coulter is showing no signs of slowing down. If anything he has upped the ante.

“I am always focused on what’s next – there has to be a challenge.”

His recent acquisition – an office away from home – is as much a statement of intent as it is a desire to create order in an overly busy schedule. By way of explanation he paraphrases Robert Graves’assertion that “domesticity is the enemy of creativity.”

On today’s music he is equally effusive. “They say the best thing about modern technology is that it allows everyone the freedom to record their own material. The one drawback is that now everyone is recording their own material! It has become all but impossible for new acts to stand out from the dearth of so-called talent out there.”

He dismisses the TV talent show format as being no more than a platform from which so-called music moguls have been given a licence to print money on the back of viewership ratings, sponsorship deals and merchandising contracts. “The music itself is incidental, and game show hosts are now the arbiters of public taste.”

He is fulsome in his praise, however, of those artists who have adapted a more organic approach, citing fellow Bray native Hozier as “a very obvious talent.”

He sees himself now, in the mode of an ‘old school’ entertainer. “I was lucky that by the time the critical acclaim that came of being a performer came around, I had developed a certain maturity which didn’t allow it to go to my head. If I had that crazy level of recognition earlier, well who knows where I would be?”