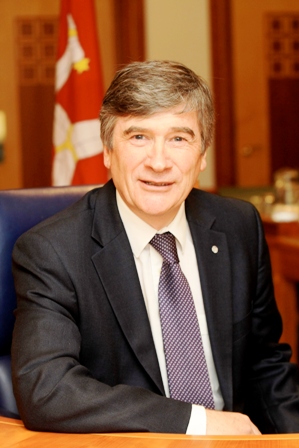 Phil Gawne is Minister for Infrastructure on the Isle of Man, and also chairs the Government’s International Development Committee, the cultural funding organization Culture Vannin, and the country’s Manx Gaelic Primary School. Recently he answered our Seven Celtic Questions.

What are your own Celtic roots?
My mother’s family is from the north east of England but my father’s family is solidly Manx going back as far as records allow. My surname Gawne, which means son of the smith, is among the oldest family names recorded in the Isle of Man. Celtic for me is about the language, culture, attitude and way of life of the people and community in which I grew up. I feel comfortable and at home in the company of fellow Celts.

Why are those roots important to you?
The Isle of Man had massive immigration during the 1960s and 70s when I was growing up and now Manx born people are outnumbered by people born outside the Island. One of the great riches of humanity is the mesmerizing diversity of our cultures and communities so, as a minority in our own land, it is important that we retain our strong Celtic identity. My Celtic roots provide me the confidence and certainty I need to allow me venture out and do good in the world.

What does it mean to you today to be of Celtic heritage?
I am proud to have played a part in reinvigorating the Manx language and passing on the language, culture and traditions that I grew up with to the generations that follow. My Celtic heritage allows me to demonstrate that I am unwilling to be absorbed by the imperious mass that is mainstream Anglo-American culture. I do not accept that the future of humanity is one in which variety and diversity are condemned to history, and active promotion of my Celtic heritage bears witness to my view.

How are you involved with the Celtic community?
I am Chair and founding member of Mooinjer Veggey and Bunscoill Ghaelgagh, the Manx language preschool and primary school movement. I am a fluent Manx Gaelic speaker, I sing with traditional music group Skeeal and Gaelic choir Caarjyn Cooidjagh and have regularly performed at Celtic festivals in Scotland, Ireland and Brittany with these groups. I write, speak, perform and promote my Celtic culture on all possible occasions.

Why is it important to keep Celtic culture alive?
Our Celtic culture is what defines us as a people. It influences the way we think, act and live and without it we are much the poorer. The loss of a language and its associated culture is as tragic as the extinction of species of animals or the loss of life through the atrocity of war. Cultural diversity like the variety in landscapes makes our world a more interesting place. Our Celtic culture has been built over millennia and we owe it to past and future generations to protect and nurture it.

Is enough being done to preserve and promote Celtic culture generally?
We can always do more but certainly in the Isle of Man our language, music and heritage are well resourced. It is difficult for politicians and decision makers to justify spending more on this without a corresponding demand from the people. We also must accept that with much more accessible communication our generation is going through the biggest cultural change humanity has ever encountered so we face an immense challenge in ensuring our culture is not lost.

What can we be doing better?
The biggest disappointment to me has been the inability of language and cultural activists to capture the imagination of the masses who seem content to access culture through a handful of dangerously influential national and international media groups. Our greatest achievement would be to create the opportunity for all people living in Celtic countries to be captivated by the words, songs, stories, tunes and histories and use their past to create strong Celtic futures.