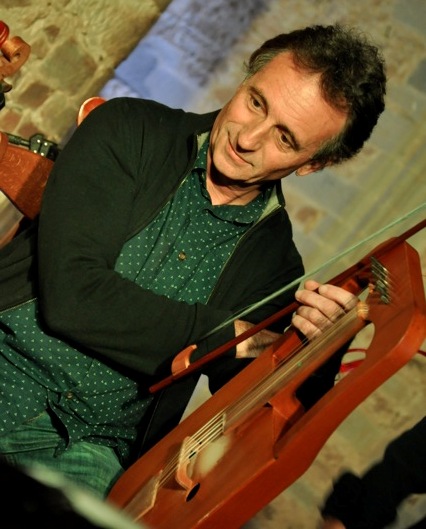 “There is a feeling of belonging to Brittany that I try to cultivate in my daily life,” says fiddler Pierrick Lemou from his home on France’s lush western coast. “Breton society has been open-minded for a very long time. I try to perpetuate that value of humanism, and my music is the reflection of my convictions.”

Both sides of Lemou’s family have lived and worked in Brittany for generations. He explains that he first became attuned to his cultural identity as an adolescent.

“Breton music was both a revelation and a means of emancipation,” he says, adding that the folk-movement of the mid-Seventies and – in particular – a gathering of Breton fiddlers, first spurred his interest in the instrument. He began to play with a variety of local and area groups, including La Mirlitantouille, Djiboudjep, Cabestan, Echo, Gwenva, Archetype and La Godinette.

“Since then, I have experimented with Breton music – the sounds that are closest to my heart.”

Indeed, the prevailing question of what if sat at the core of his early Irish, Cajun and French-Canadian projects, pushing new melodic ideas and limits whenever possible.

“My first solo disc, Kalon Koat, was an effort to crystallize all these grand musical ambitions and personal experiences into one recording.”

Over time, both Lemou and his music evolved into a sort of minimalism.

“Today, I prefer to play in a duo than in a large group, perhaps tweaking the performance of a melody rather than trying to sublimate it through the arrangements.”

As such, he frequently appears with well-known Breton accordion player, Yann Fanch Perroches, and Irish uilleann piper, Peter Merbet – just two of hundreds of artists that have had an impact on his sound.

“I listen to violinists of all musical styles, including jazz, classical, and world music. I am often delighted with their music, sensibilities, swing, and virtuosities.”

He points to Irish musicians Paddy Glackin and Tommy People, praising their timbre, technique and musicality, and calling them “masters of the matter.”

“I also admire my friend, and fellow Breton, Jacky Molard, who truly excels in composition, arrangements and sheer virtuosity.”

Pop, rock, reggae, and fusion are also of interest to him, but he draws the line at rap, saying it simply “makes no sense” to his ears.

To continue earning a living as a musician can still be challenging at times. However, Lemou is quick to note that it is more important for him to be significant than merely successful.

“In this period of growing globalization, minority cultures are the first thing that liberal politics and the world of finance stifle,” he suggests, adding it requires conviction to keep Celtic culture vital and vibrant.

Despite his words of caution, Lemou speaks confidently of the future of Celtic music, crediting young players with blending creativity and technique.

“They play with an overflowing energy like rockers – they are very inventive with an ease and confidence on their instruments.”

Moving forward, Lemou will be busy with two projects in the coming months, the first of which traces fiddle music through the centuries.

“We are exploring the history of the fiddle and its distant ancestors, the crwth, rebec and medieval fiddle. The repertoire consists of music between the 10th and 13th centuries. It will include music relating to Britain, two Renaissance suites for the baroque violin, and then traditional music in Irish, Scottish and Breton suites.”

He is also working on a show based on the medieval manuscript Le Roman de Renhart, which involves collaborating with a storyteller and another musician.

“Our aim is to interpret the tunes of the Middle Ages on reproductions of ancient instruments.”

Along with writing, recording and performing, Lemou also teaches courses and participates in internships. His urges young fiddlers to take every opportunity to play in duos, trios or sessions – places where “music gains movement and colour” – where it is better to play simple tunes with expression and sensitivity, than to give a mediocre performance of difficult compositions.

“Music is above all about sharing; there is no need to put pressure on virtuoso musicians – just play by putting your heart and soul into it.”