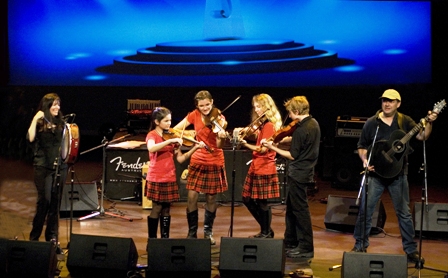 Pumpkin Juice combines four very young and exquisitely talented Australian fiddlers, all caught up in the thrall of the latest Harry Potter adventure.

It is a two-family band, comprised of lead fiddler Gabriella Blisett, 15, and her sister Olivia, 12, along with Julius Roberts, 16, and his sister, Margot, 15. The fiddlers get support from the Blisset girls’ father, Ray, on guitar, and mother, Jen, who plays bodhran and tells stories behind their music.

“They were all very into Harry Potter at the time,” recalls Jen. “We wanted this to be fun for them, so when they suggested Pumpkin Juice – after a drink in the novels – we thought it was a great idea.”

Their Fringe Festival audition took place over the Internet, and they were thrilled to win a spot performing on a main street.

“Being in an ancient city like Edinburgh was awe-inspiring for all of us. It was an amazing experience for the kids to be there performing.”

“The kids cannot wait to go back to Scotland so we are hopeful for another opportunity.”

To date, Pumpkin Juice has two recordings which have helped to spread their music and finance their travel.

“The greatest challenge in recording the CDs was to get a lovely rich violin sound,” explains Jen. “It took a lot of trial and error, with Ray as sound engineer, to get the sound we wanted. We wanted just the right amount of tone versus bow scratching with no squeaks! Now we have amazing recordings of our kids as they progress on their journey.”

Because the children are very busy with school and other activities, including classical violin exams, the group performs primarily in summer, doing only a handful of travel gigs and an overseas festival every two years.

“We don’t think about our success much,” notes Jen. “Honestly, we just practice our tunes to get better ourselves each year. The band evolved naturally, and will carry on that way.”

It was back in the music-for-babies program that the parents first thought the children might like to learn an instrument together, and Jen credits Margot with choosing the violin.

“Margot really wanted to play, and Ray’s grandmother had been an exceptionally good violinist, so the violin seemed like the right choice. We went and found a Suzuki violin teacher and the kids all started learning together.”

By the time their talent was obvious the kids already had a wonderful chemistry, and the decision to go pro was the next step.

“I had a strong Celtic background so Celtic music was the logical choice,” says Jen, whose family came from Scotland, and who remembers her granny playing Scottish music for her.

While her children come from a Scottish and Irish background, the Roberts are of Welsh origin. Again, Celtic music simply made sense. As such, the band was initially inspired by The Corrs, The Dubliners and The Chieftains.

“Our audiences love our happy music. You can see the pleasure on the faces when they see and hear how good the kids are. Older audiences, especially, get great pleasure from our music. For some of them, it is the music they used to dance to.”

Five years in, the young fiddlers are all developing their skills and finding their favourites. Gabi enjoys strathspeys, reels and jigs, but also composing new harmonies for old tunes. Composing new harmonies also appeals to Margot, who favours fast tunes. Olivia’s favourite pieces tend to be jigs, and she loves fast and fun Celtic tunes. Drowsy Maggie, with its thundering, driving speed, is among the pieces Julius loves to play.