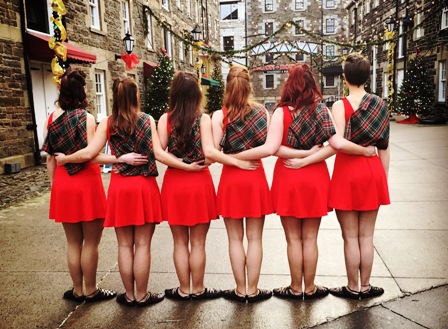 Nova Scotia’s Queensland Dancers will highlight this year’s Celtic Christmas Show, which takes place tonight in Halifax. Recently we spoke with Andrea Salisbury and Lauren MacEachern of the troupe for their thoughts on Celtic dance.

What is your ethnicity/heritage?
AS: Scottish and English

What is your age, and where do you currently reside?
AS: We are all in our mid-late 20’s, living in Halifax NS.

When and why did you first become interested in dance?
AS: For as long as I can remember I’ve had a fascination with Scottish culture. I actually started out wanting to learn bagpipes, but was too little to play a chanter at the time. My mother suggested I try the dancing first, and I was hooked!

Are they the same reasons you do it today?
AS: I think the fascination with Scottish culture will probably remain with me forever, and I’m still holding out on those bagpipe lessons!

What are the challenges of the vocation?
AS: Highland dance is very intense on the body and thus dancers are quite prone to injury and ailments. This increases as you age, so I think either current injuries or the threat of them is a challenge for many.

What are the rewards?
AS: Being able to dance is hard to describe – the best I can do is that it feeds the soul. Whether I am taking a class or performing in front of thousands, there is something about it that I will be forever addicted to.

What have been some career highlights?
AS: Trips overseas to continental Europe, Scotland, Bermuda, Barbados, and various tattoos all across Canada all in the name of sharing Scottish culture! We were also asked to perform for Prince Charles and Camilla on their last trip, and be a part of the feature film “Being Canadian” – super cool!

When and why did the Queensland Dancers first come together?
AS: We came together in 2013 on very short notice to be a part of the film “Being Canadian.” We happened to be filming on Queensland beach in Nova Scotia and needed a name… and that was it!  We recognized the need for a high caliber dance troupe in the area and decided to run with it and we have found that people responded really well to our group.

Who are the group members, and how do they get involved?
AS: Our group members have changed a bit over the years with various moves and ‘life happening’, but there are about 6 core members of us that are always up for a performance. We are always looking for new members though, so if you are of premier standard and love highland dance as much as we do definitely get in touch!

How has the troupe evolved over time?
LM: As Andrea mentioned, the greatest changes in our group since 2013 have been changes in the members. All of us are young working professionals or students, so sometimes folks have to come and go as work and/or school demands. As a performance group we must constantly evolve to keep things interesting to the audience- whether it is taking extra dance lessons, coming up with new dances, or collaborating with local artists.

Where does it perform?
LM: The majority of our performances are local (within the HRM), but we’ve performed all over Nova Scotia.

How did you get involved with this year’s ‘Celtic Christmas Show’?
AS: Our Celtic dance community is relatively small here in Nova Scotia and many of us have previously been involved in the show with the RCMP pipe band. The organizer, Zeph Caissie, is a true entrepreneur and a pleasure to work with!

In your opinion, why has Celtic dance exploded in popularity?
LM: All types of Celtic dance (Highland, Irish, Step, etc.) are great fun for people of any age and they are also great exercise!

From your perspective is enough being done to promote and preserve Celtic culture generally?
AS: I think generally, especially in Nova Scotia, there are a lot of great initiatives to promote and preserve our culture… but we can always do better! In my eyes this means actively live music events, fairs, dances, etc. I’ve heard that the Cape Breton Charitable Society monthly dances are in danger of being cancelled indefinitely if more people don’t show up. It’s up to us!

How can that be improved?
LM: I think it falls on the shoulders of everyone involved in the Celtic community to keep the culture alive in Nova Scotia. Social media is a great tool to promote music, dance, and festivals to a wide audience.

What’s next on your dance agenda?
LM: We have a few Christmas and holiday performances in December. January is usually a big month for us as well because of Robbie Burns Day. We’ll have some performances around NS and in the Halifax area toward the end of January- folks can stay updated on our Facebook page!