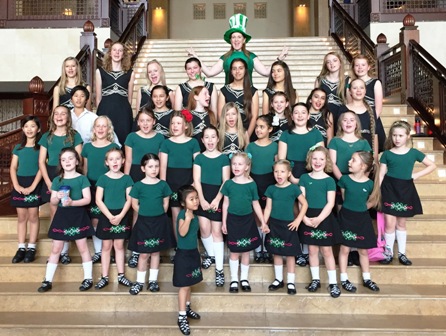 Like many who were born and raised in Australia, dancer Rachel Franzen describes her family as “a bit of a mixed bag.”

“My father comes from New Zealand, but his ancestry is Welsh, Irish and French,” she tells Celtic Life International. “My mother was born in Australia, but her parents were 10-pound-Poms who emigrated from England. My great-grandfather was Scottish, and the rest is lost in history. I am now married to a Swiss and my children were born in Dubai.”

As her husband works for an international hotel chain, Franzen has spent the last 17 years on the move, back and forth between such places as Dubai, Muscat and Moscow. She settled in Doha in 2013, where she established her dance school Irish Dance Arabia.

She and her twin sister were five years of age when their mother enrolled them in an Irish dance class.

“We had been taking modern dance, but then we moved house and Mum was looking for a class that was closer to our new home. Her friend’s daughter took Irish dance lessons, and the classes were held in our suburb, so off we went.”

Over three decades later, Franzen remains passionate about Irish dance, both as a dancer and an instructor.

“My Mum never had to drag me along. I was hooked from the first lesson. I love teaching and I love Irish dance, so this is the perfect job for me.”

Dance was something easily carried with her as she travelled and settled in unfamiliar places.

“When I first moved to Dubai in 2000, Irish dancing was a link with home and a way of making me feel less homesick. I didn’t have much time for it as I was working long hours, but I was determined to squeeze it in.”

Franzen qualified for world competition every year from age 10-17, but the costly travel from Australia to competition in Ireland was more than her family could afford. When her younger brother won the Australian nationals a second time, the family booked tickets to Ireland. Franzen, who had stopped dancing competitively while attending university, went to cheer him on.

“On the way back from the Worlds in Belfast I had a stopover in Dubai, and I never returned to live in Australia after that.”

Given her current locale, it is not surprising that her pupils come from many different backgrounds.

Interestingly, she has noticed that Irish people who are away from home develop a greater interest in their tradition and culture. In turn, they pass that along to their children, who appreciate the connection that dancing gives them to their heritage.

“There is a very strong Irish society here in Qatar, and this has also been the case in the United Arab Emirates and Oman where I lived previously. These societies of volunteers are doing a fantastic job. They organize Irish language classes and music sessions and events to celebrate Irish heritage, and are strong supporters of the Irish dancing clubs and Irish sports clubs.”

An array of different teachers with unique styles over the years helped Franzen keep things fresh in her own classroom.

“I try to stay in touch with current steps and styles by travelling to Feisanna, and following Irish dance accounts on social media.”

While she is true to tradition, she also delights in putting the old steps to modern music – something that gets a great response from her students.

“Every year the Qatar Irish Society holds a gala ball on or around St. Patrick’s Day. My students are always invited to perform and I try to choreograph a routine that includes some traditional numbers, such as the St. Patrick’s Day traditional set dance, along with and something modern and unexpected also.”

Franzen’s students have done several acapella numbers at these events, as well as a full routine to Pharrell Williams’ recent chart-topper “Happy.”

“Last year I made a mash-up of dance-themed songs and choreographed a routine to that. We like to have fun with it.”