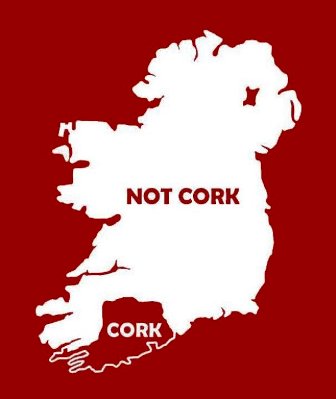 And while comparisons to the country’s other major center along Ireland’s Ancient East trail is inevitable and obvious – like Dublin, Cork has Viking roots, flourished as a trade-based port, enjoyed centuries of shipbuilding prosperity, and still prides itself on a strong nautical culture – local and area residents are quick to distance themselves from their northerly compatriots.

“I wouldn’t move to Dublin if you paid me,” laughs Patrick (Paddy) Malloy, who has lived in Cork all of his 67 years. “Not even if hell itself froze over…

“Dubliners, you see, have a bit of reputation for being…all that,” he continues, with a smirk. “We’re not like that down here. We don’t walk with airs about us. We’ve more of a sense of being grounded, or rooted I suppose.”

While he admits that the cultural divide might be a case of envy – a sort of “kid brother syndrome” – Malloy notes that to him and others, Dublin seems as distant as Paris or London.

“Cork is a little country in and of itself. Sure, we’re a multi-cultural city, with a history of immigration through the port and loads of international students today, but we are also very insular. I have family members, even older than myself, who have never travelled outside the area.

“I’m not saying that’s always a good thing,” he continues. “But at least here, you know where you stand and who your friends are.”

“Oh, I’ve been up to Dublin many, many times,” shares the 27 year-old pharmacist. “It was all the rage to go to the shops there when I was a teenager. And in my early 20s, my friends and I would visit for the weekend, taking in concerts and hitting the bars.”

Three years ago, fresh out of university, Murphy was offered a big-time job in the big city.

“Not interested,” she states flatly. “Dublin is a nice place to visit, but I wouldn’t want to live there. There’s nothing you can get or do there that you can’t get or do here. Cork is the right size for me, and I’ve my family and friends around me.”

Right size might very well be the right term. With a population of only 120,000, Cork enjoys the quaint and coziness of a small town, alongside the anonymity of a bigger center.

More pertinently, perhaps, Cork residents enjoy a wealth of haute-couture and high-cuisine; much of the city’s commercial waterfront is lined with multi-starred restaurants – a culinary appetizer to the brisk and bustling nightlife.

A multitude of award-winning creative events take center-stage throughout the year as well, including the Cork Film Festival and the Cork Jazz Festival. The city is also home to the Cork School of Music, the Crawford College of Art and Design, the Institute for Choreography and Dance, the Triskel Arts Centre and the Cork Academy of Dramatic Art. Accordingly, it was named the European Capital of Culture in both 2005 and 2009.

Make no mistake, however; as contemporary as Cork has become, its foundation is firmly footed in the past.

Originally a 6th century monastic settlement, the city only took shape after Vikings arrived in 915 AD. Like Waterford to the north, Cork was captured and converted during the 12th century Anglo-Norman invasions, and remained a loyal and prosperous Crown jewel until the late 1800s, when English taxation laws took too tall a toll on area farmers and businesses.

With widespread support for the Irish Parliamentary Party and its call for Irish Home Rule, Cork established itself as the center for Irish Nationalism in the early 2oth century. While its reputation as “the rebel city” actually arose from its support for the Yorkist cause during the English “War of the Roses” in the mid-1400s, the term took on new meaning during and following the Anglo-Irish war of 1919-1921. Even today, tee-shirts sporting the term “Real Capital” can be seen for sale in shop windows of every corner store.

“Aye, this place is the true heart and soul of Eire,” smiles Patrick Malloy.

“Look, surely Dublin is a brilliant city, and I have great friends and family there,” he adds, “but you might as well be measuring apples and oranges. I suppose it’s a little like the relationship between Boston and New York City; Boston might be the smaller town, but it’s got the bigger fight in it. And, ultimately, it is the spirit of the people in Cork that cannot be compared.”