Rhythm in the Night 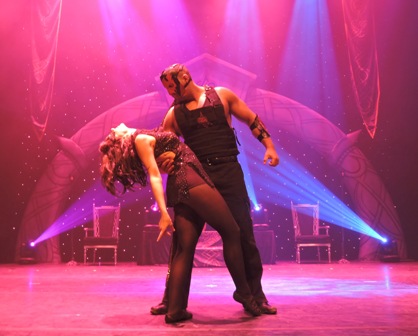 Rhythm in the Night creator and producer Justin Boros has his sights fixed firmly on the future as his ‘Celebration Tour’ undertakes its first coast-to-coast crossing of the United States.

“We’ve never done a show of this size and scale before,” says the 35-year-old via email from his office in Castle Rock, Colorado. “Audiences are going to be blown away.”

Hot on the heels of a very busy and successful 2016, the two-hour Irish Dance Spectacular – which features 20 of the world’s most skilled dancers and musicians – will perform many dates across America through March and April.

“We just finished a record-setting multi-sellout tour, our largest to date,” explains Boros, who is of Greek, Italian and Irish heritage. “The show has continued to evolve and has officially become the fastest growing Irish dance spectacle in the US.

“It’s a dream come true for me,” he adds. “And it is one that keeps unfolding in new and amazing directions.”

Even with one eye on the coming weeks, however, Boros cannot help but to look back over his shoulder to see how far that dream has come.

“Perhaps it is in my blood,” he smiles of his love for Celtic dance. “My grandmother was half-Irish.”

Maybe, he shares, it was a single moment.

“I was 15 years old, and living in Akron, Ohio. My brother and I played basketball on the state championship team. Up until this point, the world of sports was our entire life, and I had no exposure to any type of dance. I was flipping through the TV stations and stopped on PBS.

“All of a sudden, there was this man, dressed in a sinister costume, doing some type of masculine, dark style of dance to a genre of music I had never heard before. That exact moment forever changed my life.”

He continued to watch, mesmerized, as an army of dancers took the stage in breath-taking unison, performing the ‘Warriors’ number from Lord of the Dance. 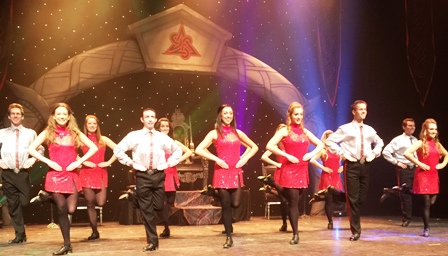 Boros soon convinced his family to see the show in nearby Cleveland. Inspired by that performance – and while his basketball teammates socialized after games and practices – he bought himself Colin Dunne’s instructional video, Celtic Feet, and a pair of hard-soled shoes. He then spent the next 18 months teaching himself the basics of Irish dance on a 4’ x 8’ sheet of wood in his parents’ basement.

“I wrote down, and learned, every step in Lord of the Dance,” he remembers. “I then drilled myself nightly until 3 or 4 in the morning. I would sleep for two hours, before going back to school.”

A family vacation to Disneyland in Florida gave Boros the opportunity to hand-deliver an audition tape to the Best of Michael Flately’s Lord of the Dance, which was then showcasing each day at the facility’s famed Epcot Centre.

Almost incredibly, he was granted an in-person stage audition.

“The very next day I was offered a contract, and then spent the next 30 months with the biggest dance show in the world.”

Joining Lord of the Dance taught him that, with enough hard work, anything was possible. It was a lesson he leaned on heavily through the development of Rhythm in the Night.

“The thrill of performing live and being part of something that gives off so much collective energy to the crowd, and they give it back to you, is something one must experience to understand.”

“This would forever be the fuel behind my passion to continue and pursue a goal beyond Lord of the Dance and to put together my own show.”

His time studying business in college gave Boros the insight into the financial logistics of developing Rhythm in the Night.

Inspired by the orchestral composer Hans Zimmer, he developed a narrative that called for 20 dancers performing to something more theatrical than traditional Irish melodies. Brothers Andrew and Jared DePolo of Cleveland worked with him for two years to develop an original soundtrack, which Boros suggests is a new genre of Celtic music. 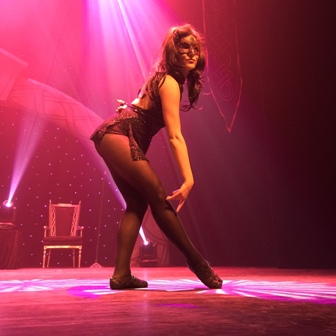 “I saw a lot of elements over time in Lord of the Dance and other shows that audiences loved, and I perceived opportunities where that vision could be improved upon. I truly believed that the idea of an Irish dance spectacular with a medieval storyline, a big bad villain, and dramatic orchestral music, was a winning formula and would appeal to all demographics.”

Right from the get-go, it was Boros’ plan to play the show’s villain, who is under the spell of a sorceress. He was determined that his character would have a spellbinding impact on the audience. While other shows relied on “costuming up,” he decided that his character’s physical presence would be enhanced naturally. He began working out, drawing on inspiration from American actor and professional wrestler, Dwayne “The Rock” Johnson.

“After years of training I went from 175 lbs to 265 lbs,” he details. “I’m 6’4” anyway, so when I executed the role for the first time on stage, the impact it had on the audience far exceeded my expectations. Every rep, every drop of sweat and trip to the gym was worth it.”

Boros’ memories of opening night in Peekskill, NY, in 2014 will be forever etched in his memory.

“We had multiple standing ovations, and several young Irish dancers ran up on the stage at the end and performed our encore with us, hand in hand. It was an amazing night, and one I will never forget as more than a decade of hard work came to full fruition.”

When the Celebration Tour kicks off in California on March 3, audiences will witness many new and intriguing elements.

“We have two new female leads that we expect to take their roles to new heights, more lighting and several choreography changes. I have the best team of dancers I could ask for. Less than one per cent of our audiences are familiar with the intricacies of Irish dance, so it is vital that we aim for great stage presence and performing ability.”

Boros is always mindful that people “pay good money” to see his shows.

“They may be worried about covering their mortgage, issues at their job, or stress within their families. It is our job to bring joy and happiness to each and every patron. If they, even for a brief moment in time, can be transported to a place of joy and happiness, then we have been successful.”

Boros aims to continue to inspire others the same way that Michael Flatley once inspired him.

“My goal is to keep doing this for as long as I can. My creative process is constant, and I am always thinking of ways to improve the show.” 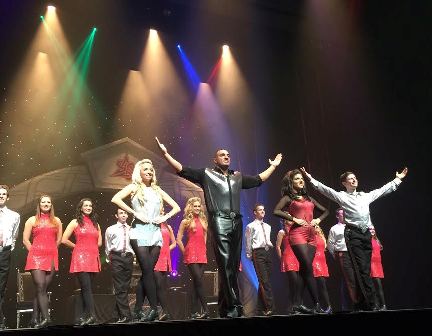 “This is our fifth consecutive U.S. tour. Getting a production off the ground and onto a tour is a massive endeavor, especially if it is a new show. There are countless obstacles, and the fact that we continue to grow and do this year after year makes me feel like this is no accident; we have a great product, a tour model that works, and a winning team of people.”

It is a formula that he hopes will also prove successful with an upcoming holiday show, Carol of the King, The Irish Dance Christmas Spectacular, which is scheduled to hit the road next December.

“It is just possible that my half-Irish grandmother is responsible for all of this,” he laughs. “I could have a little ‘Jig’ in my DNA.”

Win tickets to see Rhythm in the Night here! http://tinyurl.com/mm6gmb7