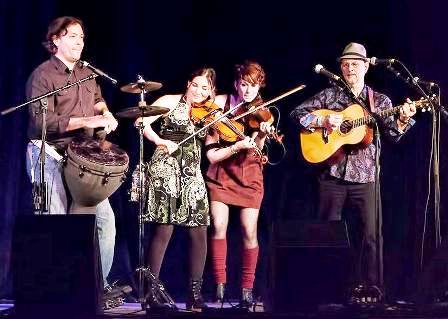 If it were not for her cat, American fiddler Rose Baldino would be tempted to stay put in Ireland.

When Celtic Life International caught up with Rose Baldino of Irish-American Celt-rockers Burning Bridget Cleary, she was visiting Galway along with her boyfriend Brian Buchanan of the musical group Enter the Haggis.

“We’re here for three weeks to play tunes and be irresponsible and so far, we’ve been very successful,” laughs the fiddler-vocalist-banjo player. “There is music in several different bars every night, and the people and tunes are absolutely amazing.”

The vacation has been a welcome break for the two musicians, each of whom had a very busy 2015. Baldino not only worked and attended grad school, but also performed and recorded an album with her band that takes its name from “the last witch burned in Ireland.”

Burning Bridget Cleary’s new CD, These Are The Days, is the Philadelphia-based group’s fifth album, following in the footsteps of Pressed for Time (2013), which topped the Roots Music Folks/Roots Charts; Totes for Goats (2011), which was formally added to the Irish Traditional Music Archive in Dublin, and Everything is Alright (2008) – named Album of the Year by Boston’s CeltRadio.net.

“We’ve really tried to step our game up with each album. And as I’ve grown older, I have become even more passionate and serious about traditional Irish music.”

“Not that I’m in any way a serious person, but in the making of our last few albums, and especially with These Are The Days, I’ve wanted to increase the complexity of our arrangements and create something that I can look back on and feel genuinely proud of.”

These Are The Days features customary, contemporary and original tunes, both instrumental and vocal. Along with Baldino, Amy Beshara serves as the counterpart of the band’s characteristic “double fiddle sound,” while Peter Trezzi handles percussion.  Baldino’s father, Lou, takes care of the guitar playing.

The recording also features several guest musicians, including Buchanan, John McGillian on the accordion, and Portherhead – a traditional Irish-Blues band from Galway.

Baldino remembers taping the jig set with Portherhead well. “I convinced them to record a track for the record, and when we got to the studio, our engineer Jim Salamone started pouring shots of Jameson for everyone. This was around 11 a.m., and we all learned three jigs right there on the spot that we could play together. Of course, the result made for a hilarious and bizarre day, but the jigs turned out surprisingly well!”

While she’s proud of the whole album, Baldino points out the dynamic first track, Madam I’m a Darling, as a song where all the band members strongly make their mark.

She was also taken back by her father’s contributions. “I’m not really sure why that surprised me so much, since I know he’s a really talented and brilliant musician, but I think that most of what makes this album so intricate and musical are his contributions…his rhythmic guitar playing combined with the different riffs and bass parts were the driving force of the record.”

Celtic and folk radio programmers have been giving Burning Bridget Cleary’s new album significant airplay, and supporters, who contributed to the band’s Kickstarter campaign for making the CD, have shared “some super kind comments,” Baldino says.

Irish American News’ Jack Baker, who calls the band “damn good”, describes the new album as “the best they’ve ever done. I love it and encourage you to give it a listen, you will not be disappointed.”

The band has concert dates coming up in Pennsylvania, New York, New Jersey and, this spring, on the Emerald Isle.

“I’m mostly looking forward to coming back to Ireland again with Burning Bridget Cleary this April for a week-long trip and tour with our fans,” says Baldino. “We’re going to Northern Ireland for the majority of the trip, and Galway for two nights, and we’ll be playing tunes in many of the hotel pubs and at sessions. There is still some room on our bus if you want to come with us. And I might just have to bring my cat!”