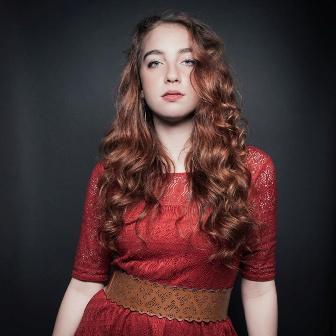 This weekend, the Royal Welsh College of Music and Drama will stage its first showcase in New York City. Recently we spoke with one of the school’s graduating students Adena Cahill.

What are your family roots?
I was born in Newfoundland, Canada, as were my parents. My grandparents on my mother’s side both moved to the island from Germany in the early 1950s, while my father’s family has Irish roots if you go a few generations back.

Where do you currently reside, and what is your age?
I can’t really answer that one, as it’s currently up in the air, but the general plan is to move back to London, UK after I finish a few months at home, home being Paradise, Newfoundland. I’m about to celebrate my 23rd birthday! I know – I’m a young’un!

When and why did you first get involved with performing?
I’ve been surrounded with music my entire life. My mother was a singer all her life, and a teacher, which in some ways is performing, and my father came from a musical family. I think I came out of the womb performing. At 6 months I was on Mother’s hip in church choir, and by the time I was 4 I had the lead in my Kindergarden play. I was doomed from the start.

Are they the same reasons you do it today?
Now I do it because I can’t imagine doing anything else. Quite simply, there’s nothing that makes me nearly as happy. The euphoria of being on a stage, the pride in a great performance, the sense of accomplishment when you work so hard to create something you think your head is going to explode, the camaraderie with a cast, or other artists… It’s the world I’ve chosen to live in and while it can often be a very difficult one, the emotional payoff is always worth it.

What are the challenges involved?
There are challenges in every industry, but it seems as though the arts are consistently under-appreciated – which is frustrating, and rather strange, because really, arts are often what a culture is remembered for. It’s a reflection of the political and economic structures of the time, as well as the social energies. Also, studying voice and acting is a study of yourself, often very mentally draining, and when something isn’t going right, it’s very difficult not to take something personally. I have a lot of friends in other disciplines, and while doing my undergrad, even though I was putting more hours in, over-loading my course limits, and being picked apart on a daily basis by myself, my peers, and my instructors, my degree-field was considered a joke. I’m not saying engineering isn’t hard, but that people don’t recognize the immense amount of work we do to create a finished product is again, very frustrating. And of course, it’s also of course a very difficult industry to break into. That quip “it’s not what you know, it’s who you know'” isn’t far from the truth. To even get in a room for an audition sometimes you have to have been godmother to someone’s aunt-in-law’s first-cousin once-removed.

What are the rewards?
Music and theatre have given me life-long friends, unimaginable experiences, and immeasurable amounts of confidence in myself as not only a performer, but a human being. As a young adult it taught me social skills, discipline, patience, commitment, motivation, respect; I could go on forever. The rewards are the reason I still do it. I believe that if you aren’t happy pursuing something, it’s time to find something else to pursue. A passion can become a successful career, or sometimes it can become a chore. I’m ecstatic to be pursuing this path, and when things get a little tedious, a step back to remind myself how lucky I am gives me new initiative to find joy in my work again.

When and why did you get involved with the Royal Welsh College of Music and Drama?
I finished my Bachelor of Music degree in Vocal Performance at Memorial University of Newfoundland in 2015, and throughout my final year had been applying for Masters programs. Musical Theatre had always been the end goal, but because my provincial university didn’t offer it, I had been studying opera for the past four years, and had grown to love it as well. I was applying for a multitude of different programs, unsure of which path I truly wanted to take. One day I actually just Googled ‘Masters of Musical Theatre’ and RWCMD came up. I applied, thinking there was no way I’d end up there, and sent off a video. To my surprise, I was quite promptly accepted. What made my decision for me was that of all the Colleges and Universities I was accepted to, RWCMD was the only one that treated me like a real person instead of just a number. I received a lovely and extensive email from the course director, in which she made it clear that I was truly wanted there. Sometimes we forget what a difference a personal touch can make.

What has your experience been like with the college?
I can’t believe it’s over, it felt like a dream. I have never worked so hard, while having so much fun. I studied with amazing colleagues, was surrounded by top-notch industry professionals, met people I could never have imagined meeting, had some of the most profound experiences of my life, and did it all in a fantastic institution. I can’t recommend it enough.

What can attendees expect at this year’s showcase?
A whole lot of talent, unfathomable energy, and maybe just a little bit of fun!

What are your own future plans?
I have to be an adult in the real world now, and nothing has ever scared me more. After 18 years of education, I no longer have any aspect of my life planned for me, no guarantees for any real length of time. The general plan is to get back over to London where my agent is and work my butt off. If I crash and burn, so be it, I have an amazing support system at home, but I need to try, or I’ll never forgive myself. Hopefully my future includes stage lights and character shoes, whether they be in the UK, the US, or Canada.