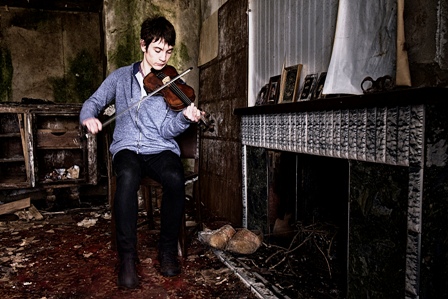 After hearing world-renowned fiddler Aly Bain perform on the BBC Hogmanay show more than a decade ago, Ryan Young hasn’t looked back.

“I was very inspired by the way he seemed to ‘speak,’ through an instrument,” fiddler Ryan Young shares from his home in Scotland. “I was a fairly quiet child and loved the idea that something could speak for you.”

Though he was only 10-years-old at that time, that first impression continues to be a lasting one.

“I would still choose the fiddle over other instruments,” smiles the twenty-something. “I feel it is best instrument for imitating the human voice. I’m also still fairly quiet.”

These days, Young isn’t overly concerned with holding the fiddle and bow the “right way” – something he struggled to do as a youngster. Good technique, he suggests, is often over-shadowed by something much deeper – emotional impact.

“I want to play in a way that allows the music to flow through me, where I am just an outlet for the music, and it is the music that is heard rather than any technical or lack of technical ability. A person’s technique is their technique, and as long as there is an emotional connection with the music, it doesn’t matter if they are holding the fiddle in an unconventional way. I look for lyricism in fiddle playing, and constantly try to replicate how a voice and singer might sound.”

Though he is a Scotsman who mainly plays traditional Scottish music, Young has found influence from Ireland’s county Clare. He admires the “lonesome, lyrical” lilts of the region’s top fiddlers, including Martin Hayes, P. Joe Hayes, Paddy Canny and Bobby Casey.

Last year, he performed alongside one of his musical idols – American guitarist Dennis Cahill – at the Feakle International Traditional Music Festival in Clare.

“It was a surreal experience to be sitting next to someone who inspires you every day,” he recalls, adding that many of the Clare fiddlers he listens to were also in the audience. “I wasn’t aware of this at the time, thankfully.”

Back in 2008, Young performed with another one of his musical influences: Scottish singer-songwriter Paolo Nutini. They graced the main stage together at T in the Park, a major music festival in his home country.

“I had just picked up Paolo’s latest album and had been listening to it over and over. I couldn’t believe that I would be performing some of it with him only a few weeks later.”

And while he can list a dozen musicians who motivate him, Young is happy to have developed a style all his own.

He even went so far as to research the matter during his Master of Music degree, doing recitals and handing questionnaires to the audience.

“Although I have been largely focused on traditional Scottish tunes, I suppose my sound is a hybrid of Scottish and Irish styles. I have always had the confidence to say which tunes and stylistic features I like, and I simply play those.”

Perhaps ironically, Young finds that traditional tunes are the easiest ones to get creative with – or “mess around with” – as he puts it. The recipe for a good fiddle piece, he believes, lies with music that can keep its integrity, even if it is altered.

“Even when changing the key or removing a note, for instance, the tune is still apparent to the listener.”

While he would love nothing more than to spend more time on creative projects and concerts, he acknowledges that bills still have to be paid.

“At this point in my life, at the end of the day, I simply can’t turn down paying gigs.”

And while playing in loud wedding bands isn’t always an ideal scenario, at least he “earns money doing what I love.”

Currently, Young is finishing up his first full-length album with Boston-based, Grammy-award winning producer Jesse Lewis. A finalist in the BBC Young Traditional Musician of the Year in 2015, he will also be recording a CD with the rest of the contestants before heading off on a tour of Scotland. He was a finalist again this year, and is excited to be both in the studio and on the road again in 2017.

“In the end, I think that playing in a heart-felt way is all that should matter.”